Hello, I noticed the “cusped” duty mark was mentioned at odd times in this post and below is a picture of a small spoon (12 centimeters) that has come into my possession.

The lack of date letter with this spoon has re-stimulated my interest in this duty change period. I checked all the photos of my own Newcastle spoons, and previously I have had none with that duty mark. From photos of Newcastle marks that I have stored from on line, I found very few showing a “cusped” duty mark. However 3 others are shown together below, though perhaps the leftmost set of marks in the composite can be better seen in the “Finial” article referenced previously in this post.

I note that there are the 3 date letters spanning 1797 and 1799. Do forum members have any other “year” marked “cusped” duty marks around to help with the Newcastle double duty story? Interestingly the 3 marks shown are likely all of “John Langlands II”. Possibly as previously pointed out by Dognose, just indicating the amount of silver items turned out by “Langlands” compared to the other Newcastle silversmiths of that period. With subsequent on line searching I have noted another 1797 “H” with a “John Roberts” mark and a “Thomas Watson” spoon without a date letter.
The “cusped” marks seem to be more frequent than I had perceived. Should there be more examples for the years up to 1804? Are there any incontrovertible examples of non “cusped” marks 1798-1804? I hope none of those non "cusped" can be found because then I may have another factor in dating my Newcastle spoons.
Yours
Fishless

Hello, I am correcting myself. I just looked again at http://www.silvermakersmarks and now see that Newcastle seemed to change their duty mark from the “cusped” mark to a normal type head in the roundel from 1800. Does that mean that there are only up to 4 years when that “cusped” mark could be found and “K” is the other possible year?
Yours correctively
Fishless
Top

It would appear that Jackson's illustrations of lobed duty marks during the period 1804 - 1820 are spurious as I have been unable to find any actual examples; at least 10 of those 17 years show duty marks in a full oval. So the appearance of a lobed duty mark looks as if it is a good indication of date if the letter is missing.

Hello, I must admit to you Phil I was very pleased to read your comment about the “spurious” 1804-20 duty marks. After looking at a large number of Newcastle marks over the past week, I had concluded the “Jackson’s” illustrations of the lobed duty mark may not have been correct. I suppose confirming the truth seems difficult because of the use at Newcastle of those consecutive sets of upper case date letters and the non-use of date letters on small spoons.
Yours
Fishless
Top

Yes, the duplication of upper case letters does make life difficult, but if they are combined with an approximate period derived from the makers' marks it becomes possible to assign most of the hallmarks to the correct date - not something which those responsible for all of the items I looked at had done. Neither does it help that Newcastle continued to use the George III duty mark right up until 1837!

I have ran accross a serving dish with no lid that has the double duty mark but no other disguising marks to accompany it.. is this a true piece or is it not uncommon to just have two king george the III marks on it with nothing else?.. no one knows in my part of the states what a double duty mark is and im wondering if ive found somthing unique or a reproduction? Would post pictures but not sure how..
Top

Hi a repost of some images of a piece the i assume is a double duty but only the two George III stams and no other marking.. just want to know if i have found somthing or if it is just somthing i got my hopes up on.. thank you an any help would be apreciated..

Hi a repost of some images of a piece the i assume is a double duty but only the two George III stams and no other marking.. just want to know if i have found somthing or if it is just somthing i got my hopes up on..

Hi DHH and welcome to the forum.

Can you start a new topic please (I suggest the Birmingham Hallmarks section) and ensure that you embed your pictures. As you have uploaded your pictures to postimg all you need to do is to copy into your post the 'Hotlink for forums' code which postimg shows you when you upload.

Hello, I have some images that I feel could be useful additions to this post. Firstly there is an image from another post in this Newcastle section of the Forum, interestingly, not relating to any of the makers mentioned by Dognose previously. 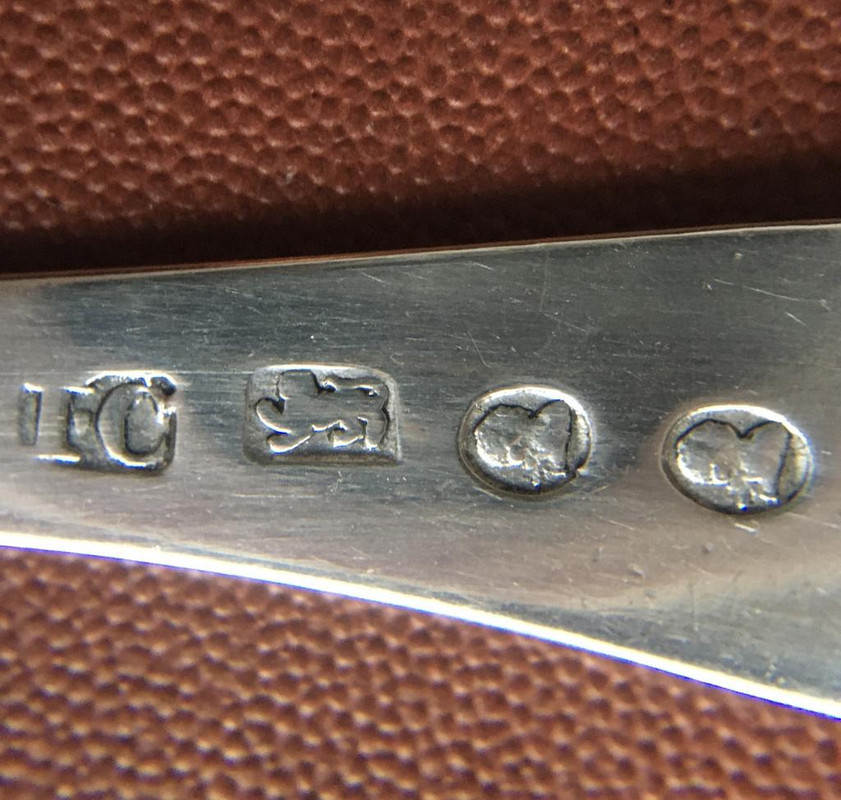 This other post featuring this image can be seen here. viewtopic.php?f=52&t=54588

The next image features spoons made by Mercy Ashworth and the Thomas Watson double duty mark image that has been lost from an earlier reply in this post. 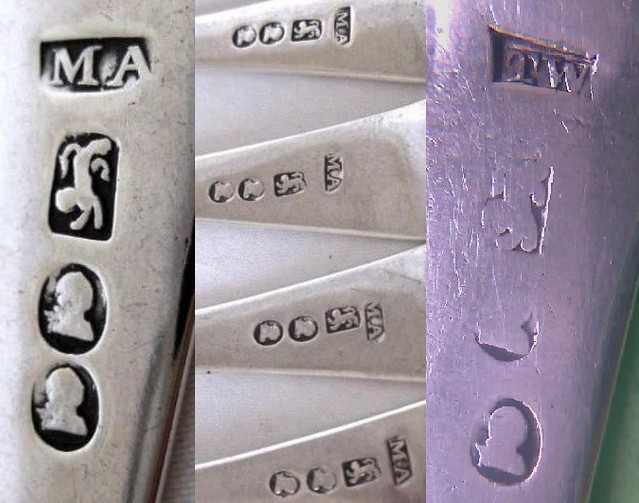 After the "double duty head" period, the duty head changed to the cusped/indented form. My last image is a composite of some sets of hallmarks referencing 1799 (I) and 1800 (K). Looking carefully at the images we can see that the cusped duty head did not appear to be used for all of 1799. For part of 1799 the duty mark was of a non cusped form. Also the Monarch's head was formed with a concave "bust base", the form that that was used at Newcastle during the first decade of the 19th century. I have added a 1824 "K" set for comparison and purposely another Thomas Watson mark. 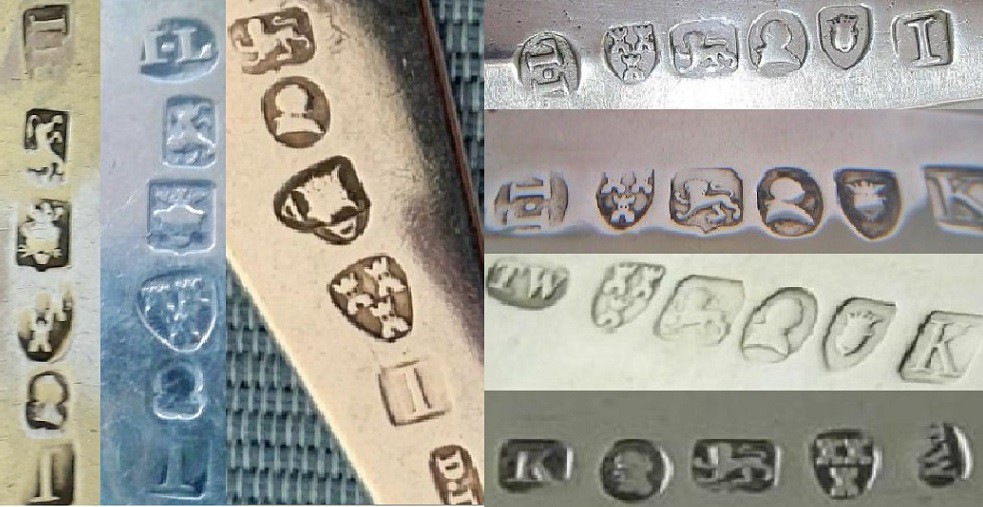