This bowl carries a maker's mark 'VK below a crescent' which I initially thought would be for van Kempen, but it doesn't exactly match any of the marks I've seen for him. The closest would be 'VK below a crescent with two dots', but those dots are missing and instead we have a couple of dots within the crescent itself. Is this just a van Kempen mark I haven't seen, or is it for a different maker altogether? The other marks show the bowl was assayed in the Hague in 1861 and is made from first standard silver of 0.934 or better.

Any help much appreciated!

Hi, Year letter b and indeed for 1861 and Minerva head or assay office mark with the regional assay office letter C for The Hague. VK under a crescent moon for Firm. J.M. van Kempen & Zonen, registered in the city of Voorschoten, and this particular mark use 1858/1924. Voorschoten is approximately 14 km from The Hague. 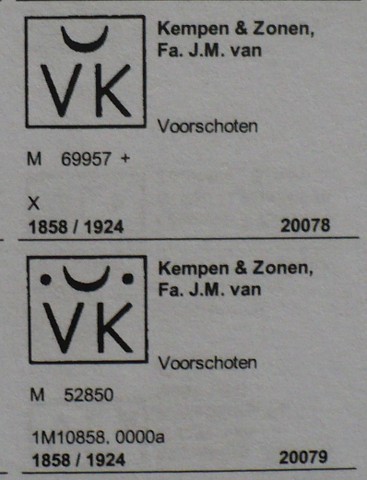 Thanks for your response. I'm still uncertain because the 1858/1924 mark you refer to has dots on either side of the crescent moon. Mine does not and is the reason I raised the question here in the first place. Instead there are dots inside the crescent. In fact the symbol looks more like a simple boat that a crescent. I had read your referenced article previously and I hadn't seen that exact mark. Is this just a variation on the van Kempen mark or someone else entirely?

The picture of the mark came in much slower than your text and so it wasn't there when I was responding. Not sure what was happening there. I guess the first one is about right for my mark and the dots that I see in the crescent are perhaps issues caused during the stamping process.