St. Louis, Mo., July 12.—Edward Haase, 39 years old, southern traveler for R. Wallace & Sons Mfg. Co., Wallingford, Conn., died Saturday at the Deaconess Hospital, from the indirect effects of an injury he received Jan. 17, 1916, when he slipped on the floor of a hotel at Birmingham, Ala., and fractured his kneecap. The injury healed imperfectly and the knee was left in such a weakened condition that efforts to use it resulted in it being broken four times after that. A nerve disease developed. About four months ago a critical operation was performed, from which paralysis resulted and since that he had been entirely helpless. His mind, however, remained clear to the end. Mr. Haase was unmarried and when not on the road made his home with his mother, Mrs. Matilda Haase of 3213 Eads Ave. He was born at Mascoutah, Ill., but had lived most of his life in this city.

He was a member of the Southern Jewelry Travelers' Association and a short time before his death the association sent $10 to William Haase, a brother, with a request that it be used to purchase flowers for the sick room, as an expression of the members' sympathy. The invalid died before the request had been complied with and the money was used to buy a floral piece, in the name of the association, for the funeral.

The body was cremated, in accordance with Haase's request. Six nephews were pallbearers. Haase had expressed a wish that his ashes be scattered on the waters of Silver Creek, near Mascoutah, where he had played as a boy, but his relatives decided to bury them in the family cemetery lot. Charles Allen, of New York, is the new superintendent in R. Wallace & Sons Mfg. Co.'s sterling silver department, having succeeded Henry Hirons, who recently severed his connection with that concern. The R. Wallace & Sons Mfg. Co., of Wallingford, Conn., manufacturers of solid silverware, plated ware and fine cutlery, has established a salesroom at 104 State st., Chicago, under the management of O. F. Bridges. A complete line of its goods will be carried, adding frequently the latest productions in silver and other metals, so that at all times the stock will be fresh and up to the most recent and artistic efforts in silver and plated wares. The company feels confident that it possesses the ability to please the most fastidious and exacting trade, as well as to suit the more moderate desires and tastes of those requiring goods of less intrinsic value.

Oscar Graveline, 89, formerly of 309 S. Main St., died Friday at Skyview Convalescent Home. He was the husband of the late Sarah Hines Graveline. Born in Wallingford July 11, 1884, he was the son of the late Napoleon and Adeline Graveline.

A former employee of Wallace Silversmiths, Mr. Graveline is survived by several nieces and nephews.

The funeral will be held today at 8:15a.m. from the J.W. Fitzgerald Funeral Home, 209 Center St., with a mass of resurrection at Holy Trinity Church at 9 a.m. Burial will be in St. Lawrence Cemetery, New Haven.

Charles Hodge, late with Reed & Barton, has accepted the Philadelphia agency for R. Wallace & Sons Mfg. Co. and opened an office in the Penn Mutual building. Seen in photos here and marked for Hotel Del Coronado in California, also to be found (see Worthpoint) for Union Pacific Railroad marked "U.P.R.R." and including patent name and 1908 date. Thanks to Larry R. Paul, we now know this was related to the Bustanoby Brothers who ran New York restaurants termed Cafes during the era of the great lobsterhouses (see additional customer updates for Maddock Pottery Works @ LarryRPaul.com under Bustanoby Restaurants). Jaques Bustanoby, a citizen of the French Republic residing in Manhattan filed a patent application on 15 November 1907 which was granted 02 June 1908 as US889434A. The chief purpose seems to be a way to spread butter evenly across the cob via a bath. Original drawings differ from the Wallace production version here, and included knobbed prongs used as handles which could be suspended on the holder. A cutter may have also been part to the whole set. The lack of patent notations on this sample may suggest production continued sometime beyond the point where the expiration ocurred 1919-25. It was not until 1952 that a related patent was filed by another party seemingly to revive the idea. 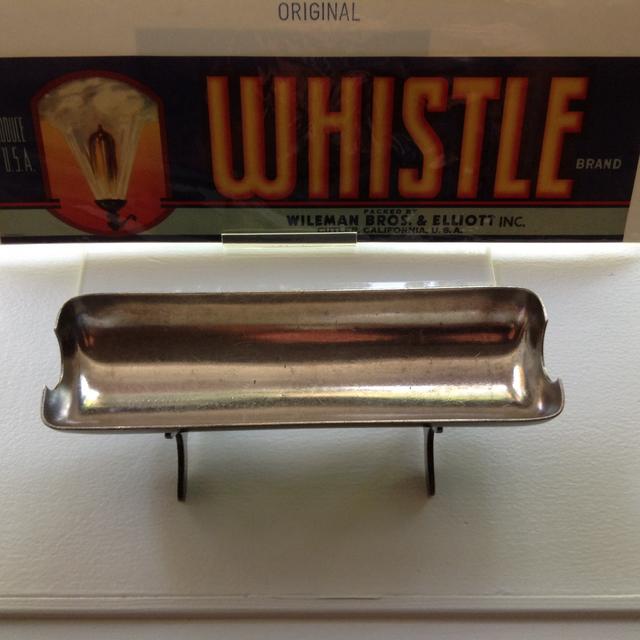 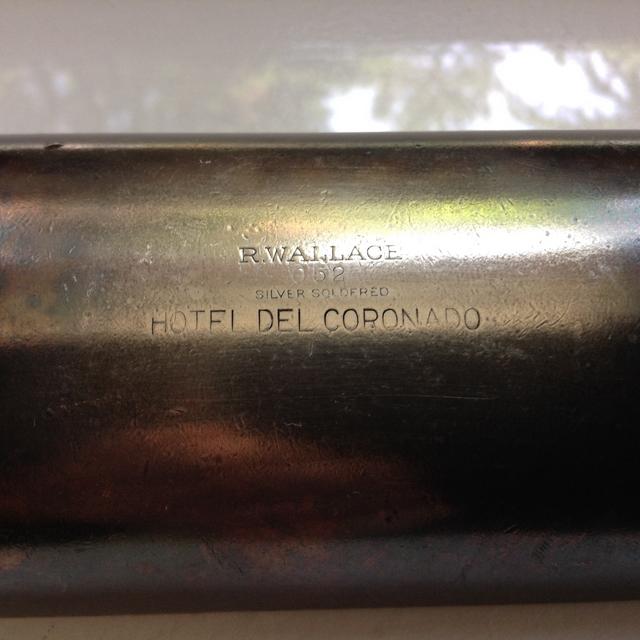 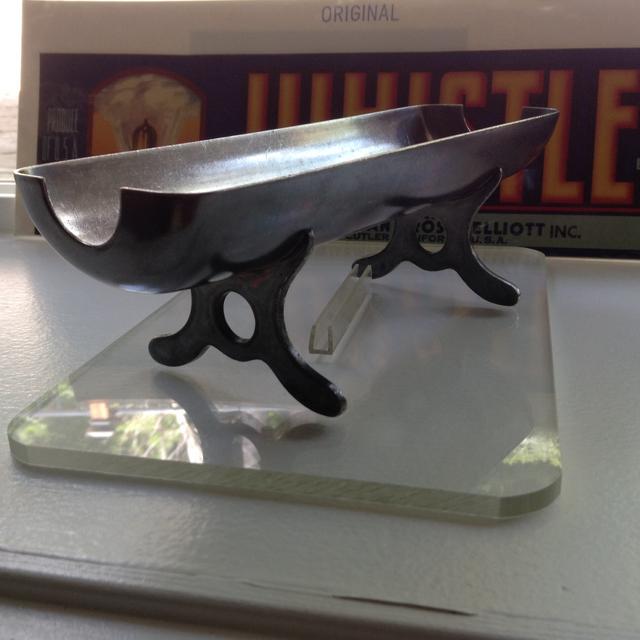 The latest designs of handles used by Messrs. R. Wallace & Sons upon their sterling and plated ware knives combine elegance and utility most admirably. One rich style of carving knife has a handle of oxidized silver, after the pattern of a stag's horn. Others are fashioned after the antique style of chasing, while some of the embossed designs are beautiful. These handles, have an advantage in their strength, being made without seams, and thus, while enhanced in beauty, they are also more durable. Many new designs also of coffee spoons have recently been shown, of classic and superbly ornamented patterns. Oxidized silver is the prevalent style, but polished and frosted work still find a large sale.

Source: The Jewelers' Circular and Horological Review - May 1887

F. A. Wallace, Wallingford, Saturday, left for Boston whence he will go to Concord, N. H., to attend the commencement at St. Paul’s School to-day, where his son Robert Wallace, will graduate. After the exercises Mr. Wallace will make a fishing trip to Maine. Robert B. Wallace will soon return to Wallingford with his family and take a place in R. Wallace & Sons Mfg. Co.’s factory.

The R. Wallace & Sons’ Mfg. Co., Wallingford, has decided to form its own fire brigade. A meeting attended by several of the employes was held Jan. 30, and a chief, three assistants and a captain of the salvage corps were chosen.