Hi.
What can you say about the hallmark 76?
Regards 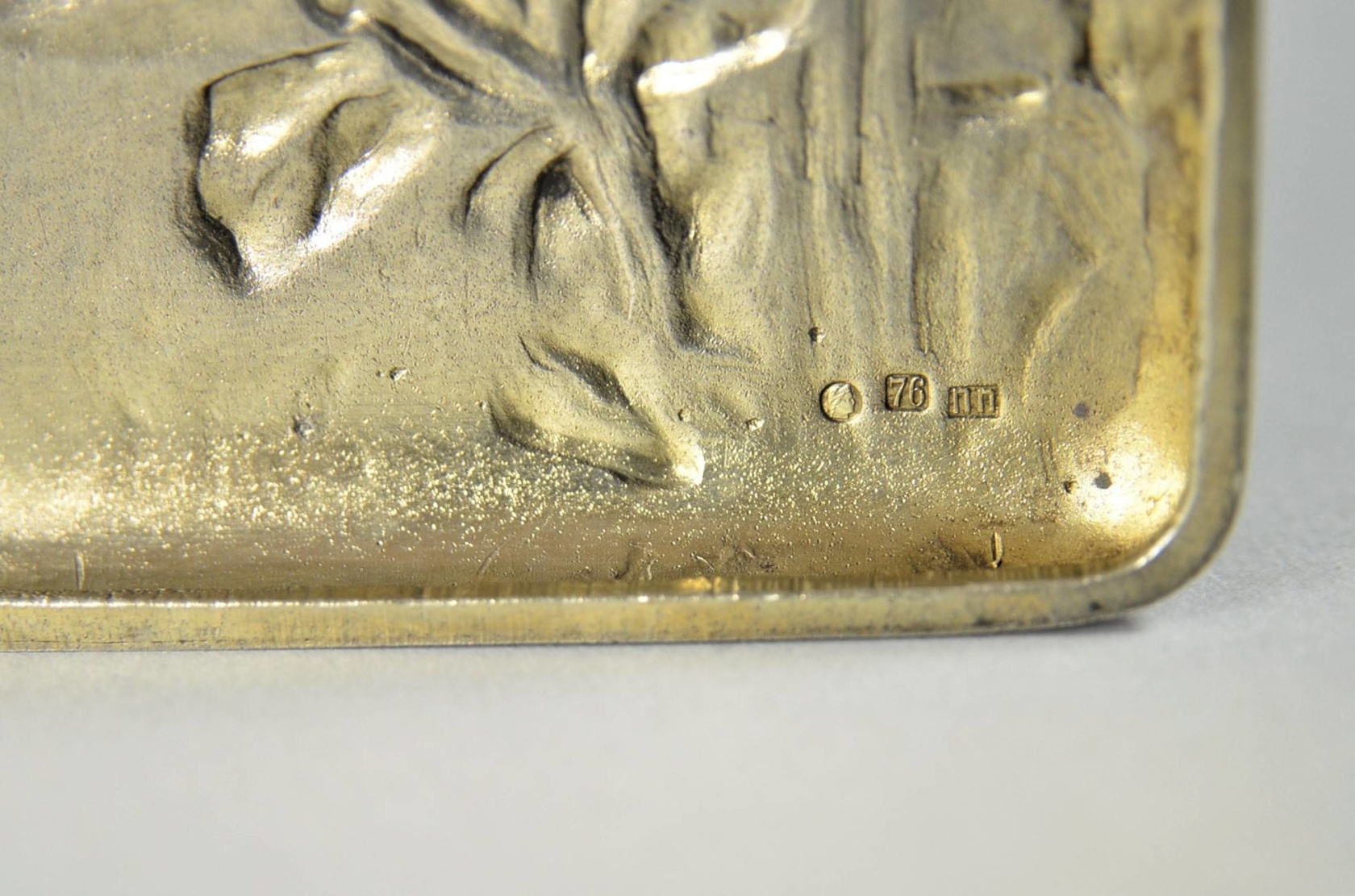 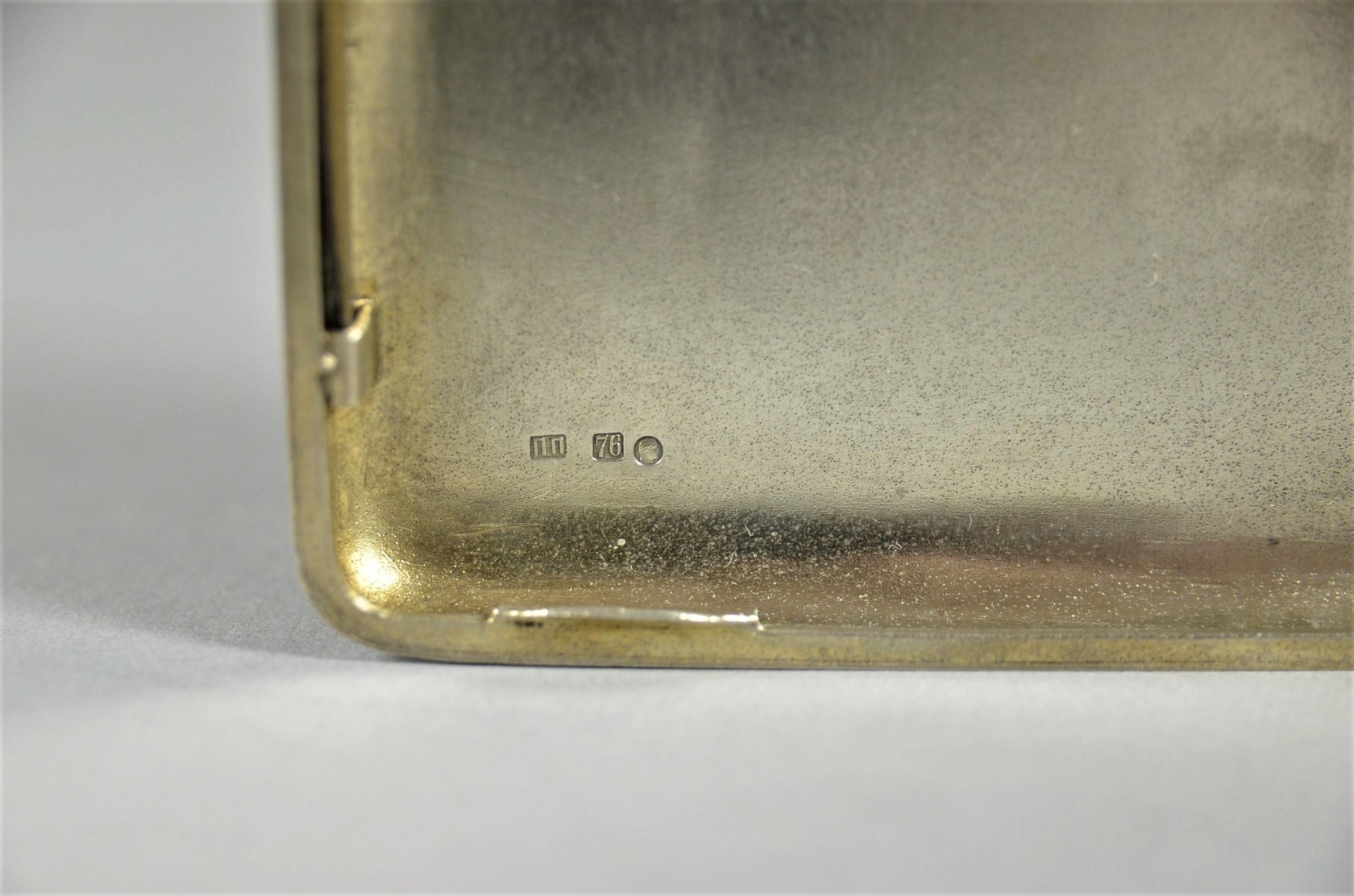 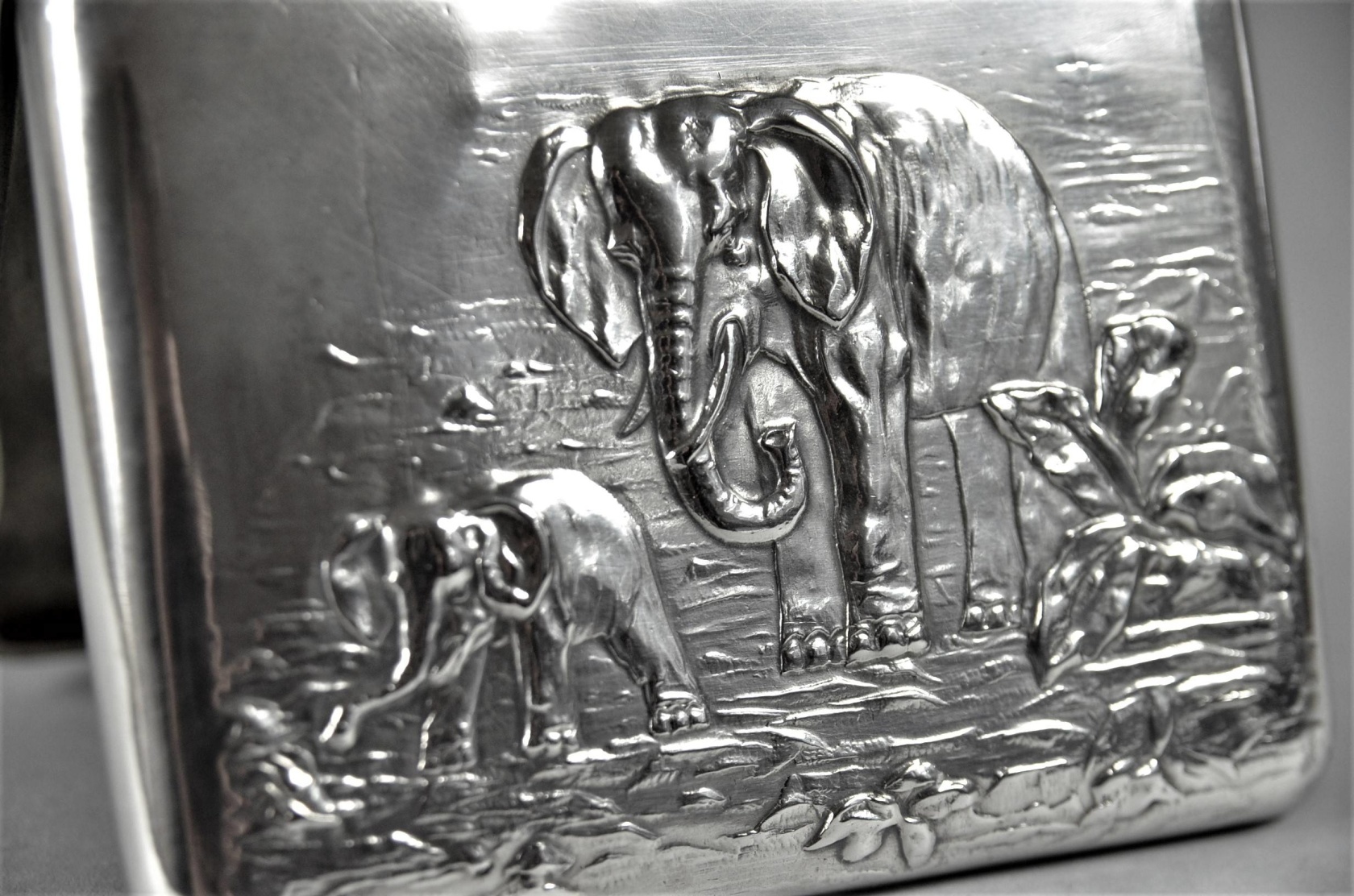 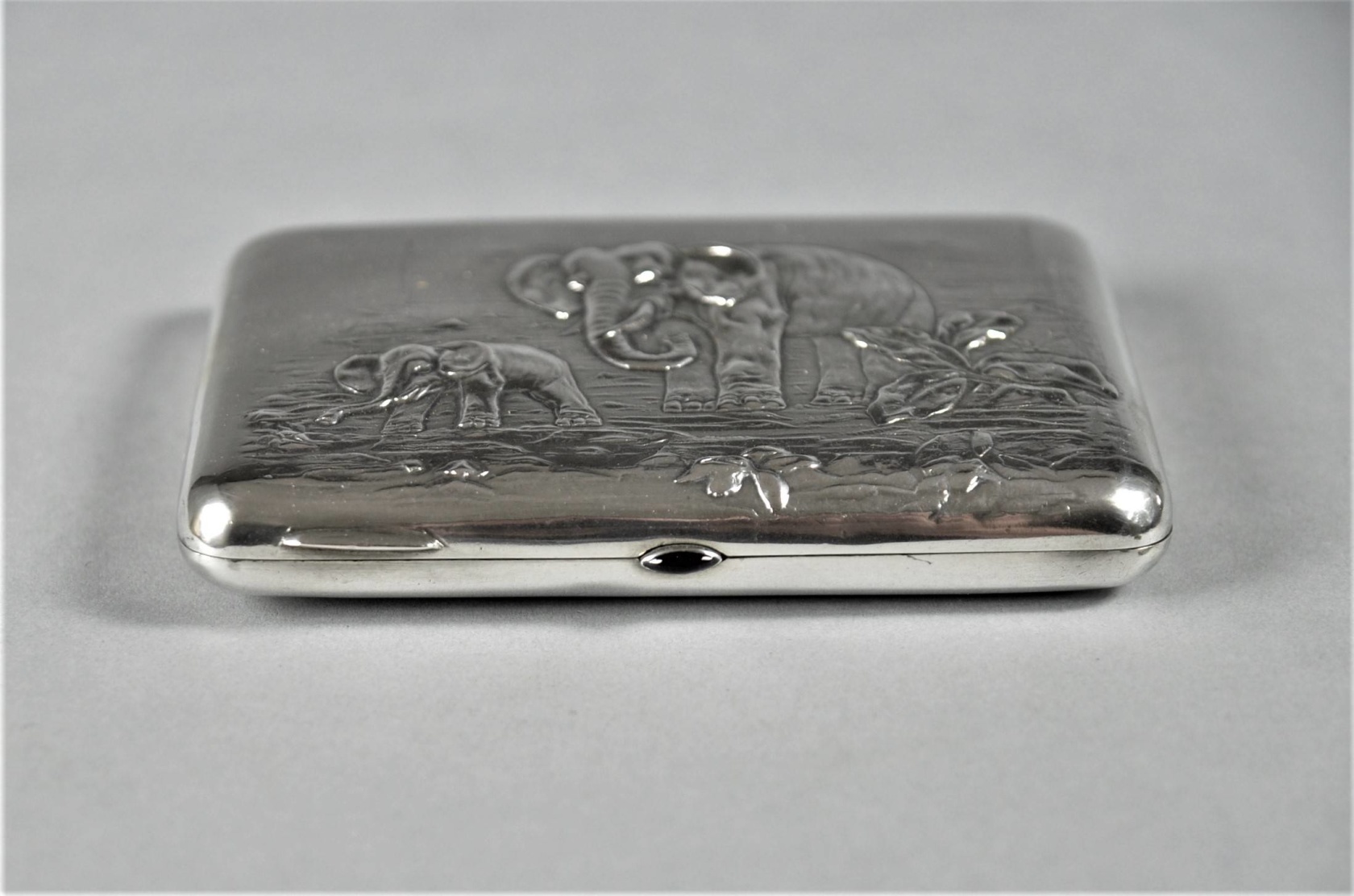 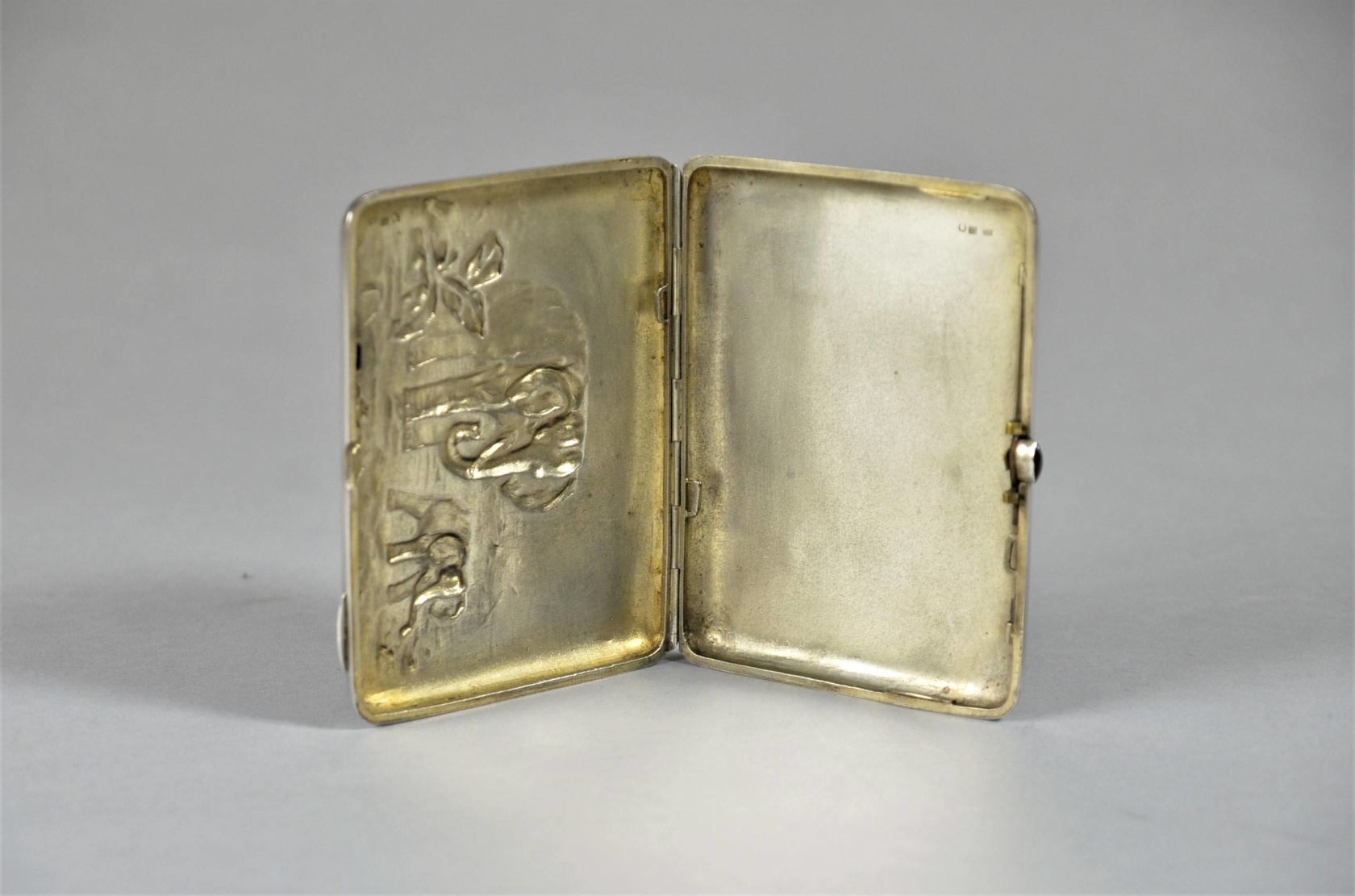 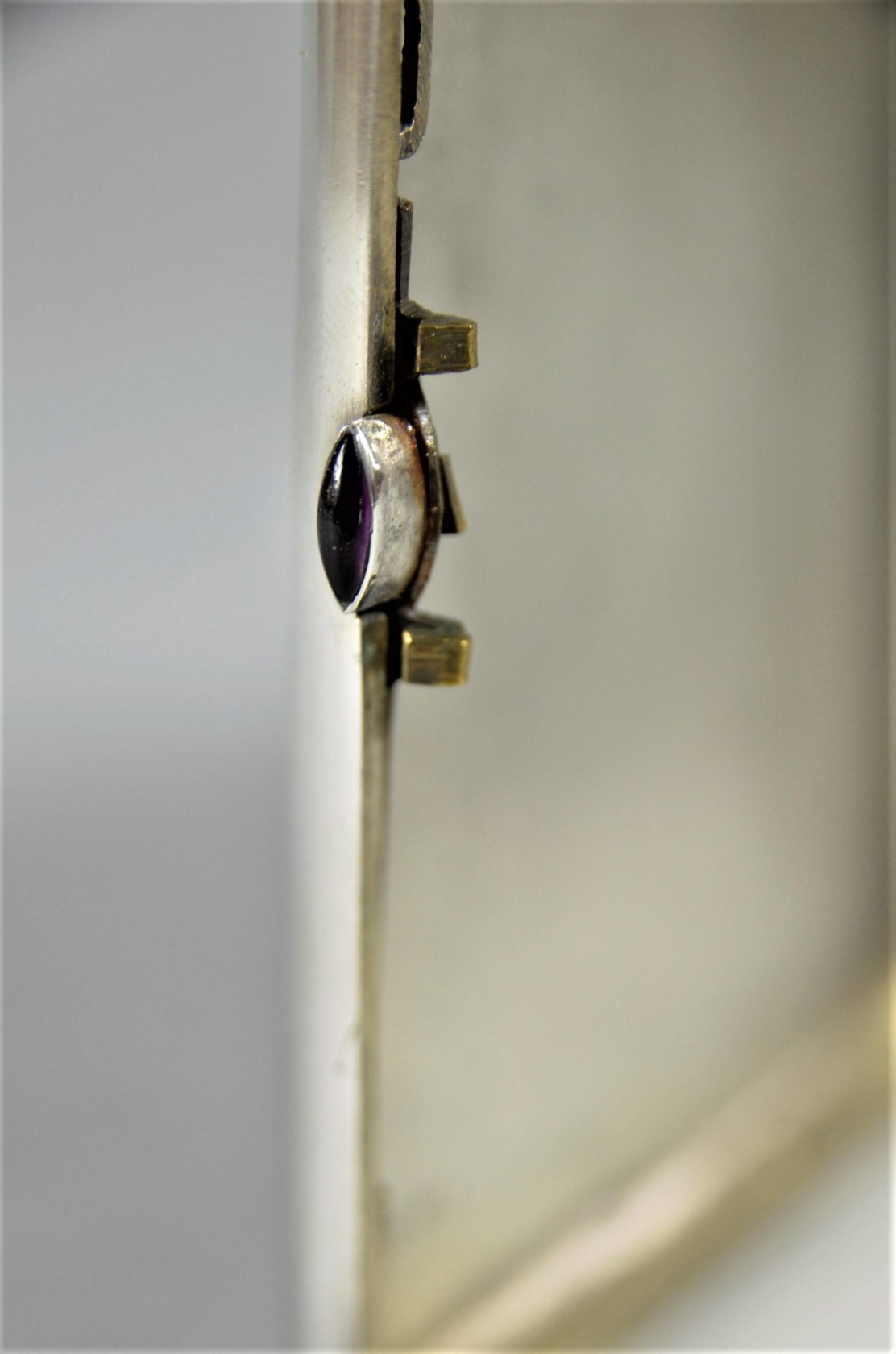 Let's start with the 76-mark. If it supposed to express the silver fineness, it is an illegal finenessmark. In Russia was minimum fineness since 1798 84 zolotnik. This arises another question about the kokoshnik mark. It is not a stand alone mark and should be used only in connection with the oval right looking kokshnik hallmark with the assay cipher in it. Anyway, the kokoshnik on your object should show additional markings i.e. dot(s). Unfortunately your picture has the size of an mini ant.... You show a close up of the knob, why not show a similar close up of the marks? They are much more important than the knob.
But back to question: What to say about your object? The answer is: Problems if those are the only marks on the case!
Top

Hello.
I know that since 1798 the minimum silver test is 84 zolotniki, as for the Kokosznik mark, I have no better picture but I can see that it is Moscow. The cigarette case is not a fake and the hallmark are also original which does not mean that they are legal. That is why I am asking if anyone has ever met with such a mark. 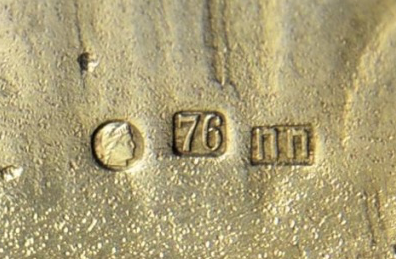 OK, it is Moscow if you see a dot behind the neck, but hallmarks were not punched on objects made in illegal fineness. Finally, yes, on fakes you can see whatever.. Moreover, the case is not necessarily a fake but something is wrong with the marking.
Top

76x10.4 = 790.4 in metric fineness.
Three months after the outbreak of World War I, silver coins disappeared from circulation in Russia,
Difficulties with silver raw material affected all jewelry firms.
Even in Faberge workshops, wooden frames with silver ornaments were produced; by the end of 1916, the front panel on table clocks was made of precious wood with gold inlays.
Apparently some firms went the other way and began producing items of lower silver content.
On those items, which are considered uncommon,full assay office marks are often missing, which is very strange, and the fineness corresponds to foreign 800.Besides, all items made in 76 standard were of modest quality and design,indicating rapid decline, also seen in this cigarette case.
In my opinion it is an authentic item made at the dawn of revolution when Russia was already in chaos.
Regards
Top

Anyway, continuing the "assumption" allows us to assume that the maker's mark ПП could belong to Pyotr Petrovich Petrov, active in Moscow 1908-1917. That is undoubtedly on the doorstep to the Great War....I'm still skeptical...
Top

To my knowledge the Russian hallmarking system consisted of the following silver standards:

There was also the praxis that on objects which might get broken with the hallmarkings only the oval kokoshnik with the standard was placed beside the makers mark.

Thereby I would consider that the hallmarking and the object to be authentic.

There seems to be a minor disagreement going on. In order to settle it, in the following how it was according to regulations, edict, assay charters etc. as from 1711. But before that, silver fineness used in the 18th cent should not be compared with fineness used in the 20th cent. The time gap is up to 150 years and that is quite a long time. A lot of water has flown in river Jordan during those years....

Anyway, the first edict ordinates by Peter the Great in February 13, 1700. It establishes four silver "qualities". However, it is a bit unclear how they were defined. The edict of December 11, 1711 is clearer. It introduces three silver "standards:
1. Melted silver free of alloys (~99)
2. Yephimka, i.e. 82 zolotniks
3. Levkovoie, i.e. 62 zolotniks

In January 24, 1729 a new standard is implemented but only for monetary silver. It is 77 zolotniks. The levkovoie standard (62) is raised to 72 zolotniks. Later the 77 zol. will be substituted with 72 zolotniks. The standards mentioned above will be substituted to a minimum standard of 84 zolotniks in May 1, 1798. In March 31, 1847 a new edict is released. The silver standards are as from that date;still minimum 84, 88, 91. In addition, 94 for drawn or pressed silver and 94-96 for braid silver (whatever the two last ones actually mean?). These official standards are valid in imperial Russia until 1917. What happens after that is another story.

Of course it was not forbidden to use other unofficial silver fineness in Russia but not less than 84 zolotniks.

As to what is stated in Postnikova. It is the best book available for the moment but unfortunately it contains some "inefficiencies and frankly said errors too. I have registered close to 200 "inefficiencies etc.". Juke mentions #10 (76). It could be a mistake or a gold fineness. The gold fineness in 1718 was 75 zolotniks. The dating might be incorrect also. The official standards are still the above mentioned. Please note that the coin standards for both silver and gold differ a bit from the above mentioned standards, but coin standards should not be mixed with this.

The history is actually longer, but I cannot write a whole novel here...;-)
Top

This set of marks appears on a cigarete case dated 1917.Remarked in Soviet era.

Common features on 76 items emerging on Russian forums: poor quality and made close or during WW I.
Anyway, assumption are poor method of judgement.

I am seeing a small cup for auction with a "76+Kokoshnik" mark where the number 76 is incorporated into a Kokoshnik-style hallmark, the seller claims it is of Armenian origin, the handle of the cup and the bottom of the cup are marked as well. :::::::

Is it possible that the number 76 has something to do with the relationship between Russia and Armenia?
Top

This thinness (76 zolotnik ) begin used according to the Decree of 3 July 1922 from All-Russian Central Executive Committee of People Commissars Council of the RSFSR.
In 1927 in USSR begin used metric system. 76 zolotnik transformed to 800 metric.
Top

As to what is stated in Postnikova. It is the best book available for the moment but unfortunately it contains some "inefficiencies and
frankly said errors too. I have registered close to 200 "inefficiencies etc.". Juke mentions #10 (76). It could be a mistake or a gold fineness. The gold fineness in 1718 was 75 zolotniks. The dating might be incorrect also. The official standards are still the above mentioned. Please note that the coin standards for both silver and gold differ a bit from the above mentioned standards, but coin standards should not be mixed with this.

The history is actually longer, but I cannot write a whole novel here...;-)

Just admit that you have no clue - as so often.

@Goldstein
I didn't take you long to stay away as you threatened. May I remind you of this:
viewtopic.php?f=46&t=53578&p=169681&hilit=Friendly+note#p169681
Shall we start lesson number 2?
Moreover, why don't you ask your Russian friend, your irreplaceable source? Maybe he could provide you with a "friendly note" of the cigarette case's origin?
Finally, no I don't have a clue. I never said I had.
Top

Hi -
Your rudimentary knowledge may be enough for an autodidact - but it is far from enough for a sophisticated forum. There are 2 types of sources in science: primary sources (100% verified) and secondary sources (not 100% verified). Just ask some expert - he will explain you the rules of the trade. The more you ask, the more answers you get! Stupid insults lead to nothing - you experience it again and again. Answer only simple questions - you simply lack the knowledge for complex questions or relationships. And strive for a better style - this is not a forum for street boys ....

Yes Goldstein, you are very well known for that. Your above input is a good example. You have ruined you reputation yourself.
End of this stupid discussion.
Top

Qrt.S wrote: You have ruined you reputation yourself.

Is there anything you can do flawlessly? In any case, Russian silver and the English language are not!
Remain as you are - every forum has something like a court jester.

Hi members
It is interesting for me to read the dialogue between ,Goldstein and Qrt.S,

As on another forum site I will not mention ,I am banned by the moderator when he is incorrect and I am 100% right. He also deleted my images that were helpful and correct ,as misleading ,later posting his own similar images making out he was a hero,and later saying he had to eat humble pie,when my earlier images were proven correct.

I am glad to see this forum does not have a bully and a control freak for a moderator ,as I would have thought these forums should be about finding the correct answers for the person posting a question, an not the ego of the moderator.

gsmoggy wrote:
I am glad to see this forum does not have a bully and a control freak for a moderator

You are an angel ,compared to the other chap,I could not believe what an idiot he is.

This is the best Forum by a mile.