Hello,
This brooch belonged to my grandmother and I know very old. It only has one stamp that I can see only 875 on left hand bottom corner. She brought it when she moved here from Germany in the 1940's and she told me it had been in her family a long time but I have no idea of age, country or origin etc. Can anyone help identify it?
Thank you for your help and time.
Roberta
https://www.flickr.com/photos/163040009@N02/edit

Not sure how to do this?

The below should help you:

https://postimages.org (copy the 'Hotlink for forums' code) is recommended. Do not use Photobucket or Dropbox.

Hi,
In regard of the age,it was made in very late 19th or more likely in early 20th century, based on clasp and .875 millesimal fineness which was introduced in many European countries very late in 19th century.
As for the origin, it`s not Oriental filigree but more typical of Northern Europe (e.g. Norway).Of course, based only on design and .875 it would be unprofessional to give exact attribution.
Regards 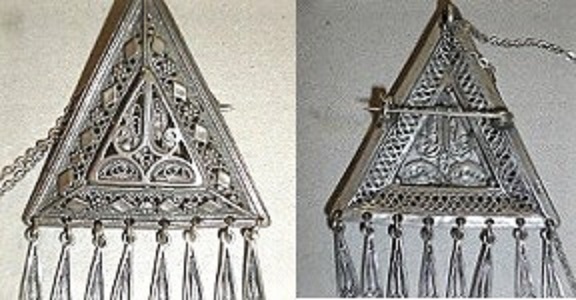 Perhaps we could see a close-up of the mark, suspect it might be a poorly struck '925' rather than '875'. The Bedouin triangular filigree pendants or brooches like this, with the dangles and little applied flower and diamond elements, when found with a numeric fineness stamp, and the safety catch on the pin, are typically Yemenite/Israeli and mid 20th century or later (they're made in other shapes, and other items as well). While this doesn't really fit into your family history, sometimes stories get a bit muddled over the years...