Birmingham Silversmith Nathaniel Mills
Image:
Snuff box, Nathaniel Mills, 1836, with a view of Newstead Abbey, the ancestral home of poet Lord Byron. Gilded in and outside. Applied raised thumb piece. Sides engine turned. Hinged lid, 13 hinges. Back engine turned with free cartouche. Year letter Gothic N for 1836, Duty mark of William IV. Newstead Abbey is in Nottinghamshire and was originally an Augustinian Priory before becoming the ancestral home of the Byron family. The most famous family member was the early 19th Century Romantic poet Lord Byron. Byron died in 1824, whilst acting as a mercenary during the Greek War of Independence, and Newstead Abbey became a site of pilgrimage for his followers.
Measurements; wide 6.2cm/2.443inch, deep 3.7cm/1.458 inch, tall 1.2cm/0.473 inch. Weight 56 grams/1.977 ounces. 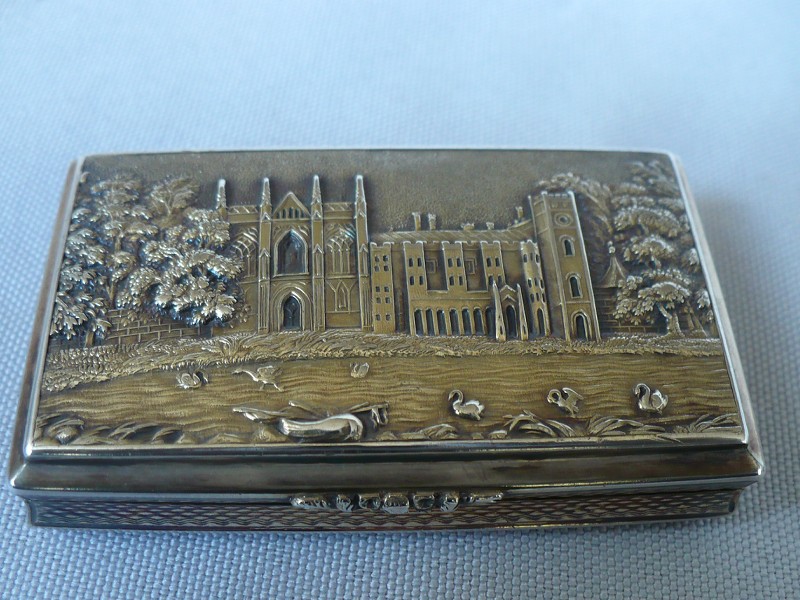 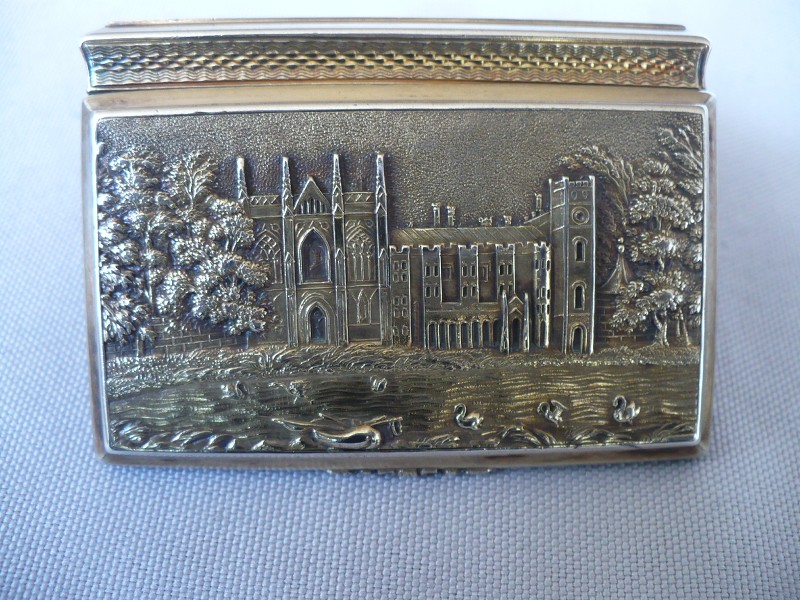 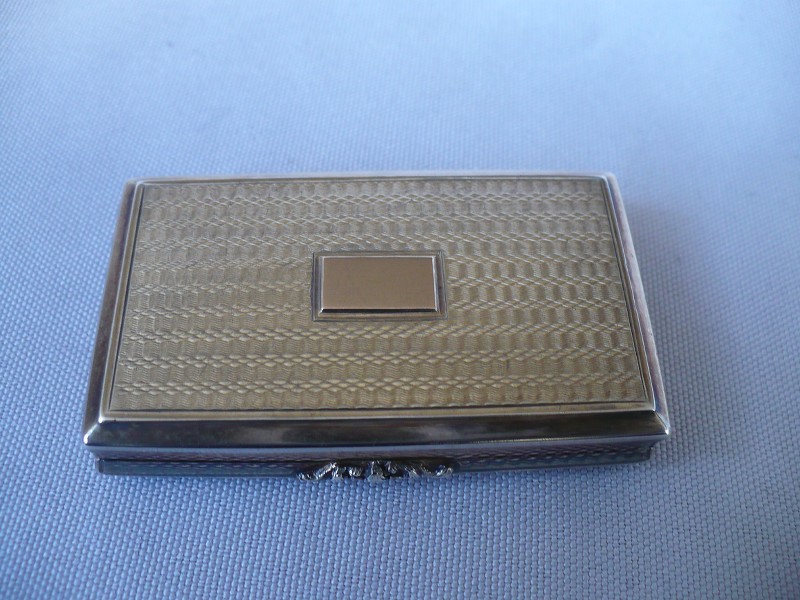 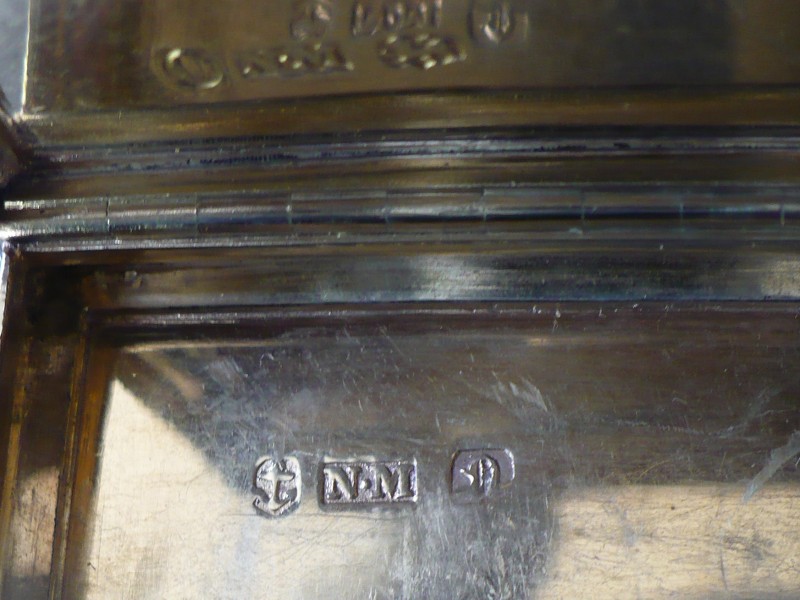 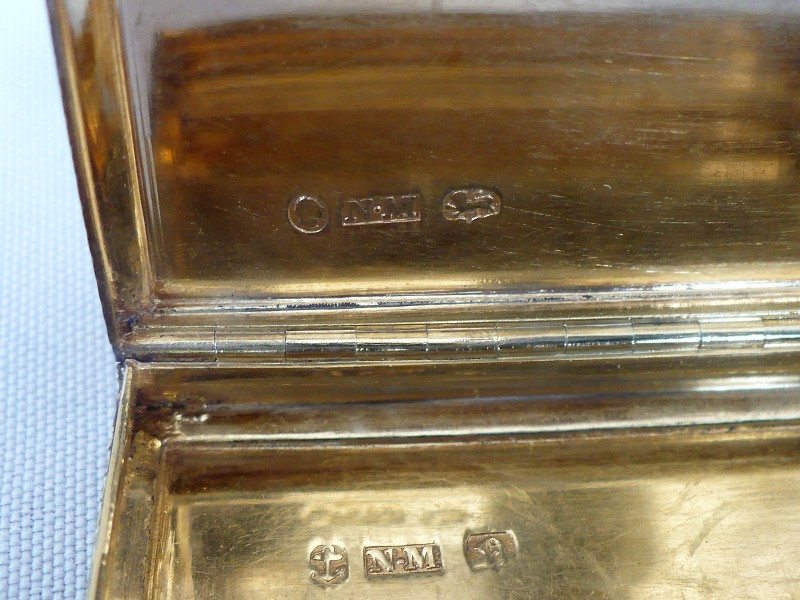 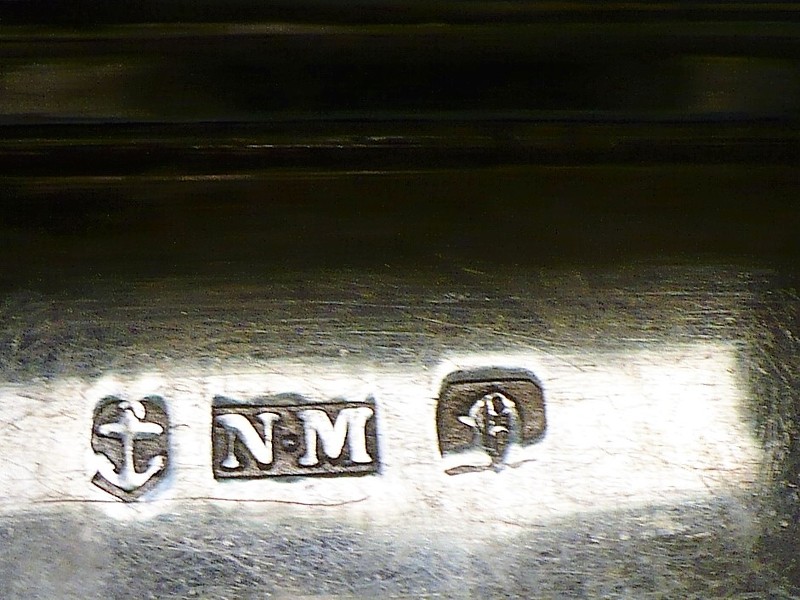 Nathaniel Mills the elder registered his mark as a silversmith in 1803 as a partner in “Mills and Langston, Jewellers Northwood”. He registered his own mark from a new address in Caroline Street. His son, also called Nathaniel Mills (1811-1873) was famous for his well-constructed silver boxes and his adaptation of new techniques to the industry in the 1830s, including stamping, casting and engine turning. In 1836 new and presumably larger premises firm were opened in Caroline Street. Mills turned out large quantities of vinaigrettes, often with popular topographical scenes. When he died in 1873, he left £30,000 in his will.

Question why does a Nathaniel Mills card case, snuff box or vinaigrette command such a high price and generate so much interest? The answer could be in the quality of the article. The fact that so many have survived in such good condition after more than 150 years is surely a testament to the quality of their construction. Mr Mills set a high standard.
He used a gauge of silver which, despite the high relief of the image, did not easily wear into holes, the hinge was robust enough to withstand frequent movement, the corners and seams were well soldered and smoothed into the profile. Where he soldered a die cast or a cast image onto a box, he often cleverly incorporated cast scrolling as a ‘frame’ to further cover the joint.
Most important was the actual design, which interpreted the demands of the fashions of the day. The Victorians had developed a taste for the souvenir, and Mills’ products were available to fill the demand. This souvenir fact, it is suggested, had been brought about by the expansion of the railways which led to the opening up of new tourist areas, not only providing the adventure of travel in what was then a modern way, but also enabling those Victorians who could afford it to visit the sights they had only read about. Most were also loyal monarchists and anything to do with Queen Victoria and Prince Albert was revered. Hence the images of Balmoral Castle, Buckingham Palace, Osborne House, and the Crystal Palace which was built to house the Great Exhibition and was so closely associated with Prince Albert.
Nathaniel Mills the Elder first entered a maker’s mark at the Birmingham Assay Office in 1803 when he was associated with a Mr Langston as Mills and Langston. They were listed as Jewellers at 2 Northwood Street, Birmingham, but he had never actually been articled as an apprentice silversmith. He was probably the entrepreneur with the finance available to set up a jewellery manufacturing business whilst his partner, Mr Langston, could have been the skilled jewellery maker with Nathaniel Mills himself perhaps marketing their products.
In 1825, however, he then registered his own mark, ‘N.M’, at the Assay Office in Birmingham, but Langston was not included, and Mills was then seemingly producing items of silver as opposed to concentrating on jewellery. From 1825 until 1855 there were a total of seven separate registrations at Birmingham Assay Office with the punch marks showing very little variation in style other than clipped corners and the inclusion of a pellet between the ‘N’ and the ‘M’, but always within a rectangle. There are five different addresses shown in various census record s for their workshops; in Caroline Street at number 49, and later at number 42 which he bought from George Unite in 1836, in Northwood Street and in Howard Street at number 9 and later 11½, all of them being within the Jewellery Quarter and within a short distance of each other.
Nathaniel Mills was not just used by one person but by a whole family of silversmiths.  Nathaniel I (1746-1840) was followed by his sons Nathaniel II, William and Thomas and many of the pieces made in the 1840s until 1853 were made by William or Thomas, partners in Nathaniel Mills & Sons, silversmiths. William died late in 1853 and although there was a Nathaniel III (1810-1873) he does not appear to have been a silversmith and did not carry on the family business.

Herewith a sterling silver Etui / necessaire by Nathaniel Mills . This quality sterling etui was produced in Birmingham, 1839-1840, duty mark head Queen Victoria, Gothic Q for 1839. The etui with hinge and push button release, shows a great repousse style of work, containing many different types of flowers, vines and leaves with a frosted (stippled ) background. Each side has a cartouche that is monogrammed with 'FL'. Inside the case is lined with a deep red velvet fabric, wax coated, with two "writing" instruments.Measurements; height 2-5/8"x width 2-7/16"x thickness3/8". I'm afraid the two items contained in this one, are a mystery to me.
The case itself is called an Etui, they usually contained small items such as toothpicks, needles etc., with the loop on the lid it could be used in connection with a Chatelaine, an item worn on the belt of a housekeeper, it was a clip with chains for suspending keys, scissors, aide-memoire etc. However it also could be connected to a silver watch chain. 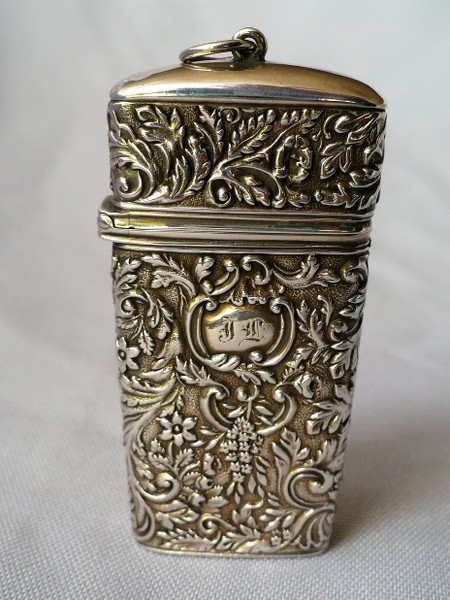 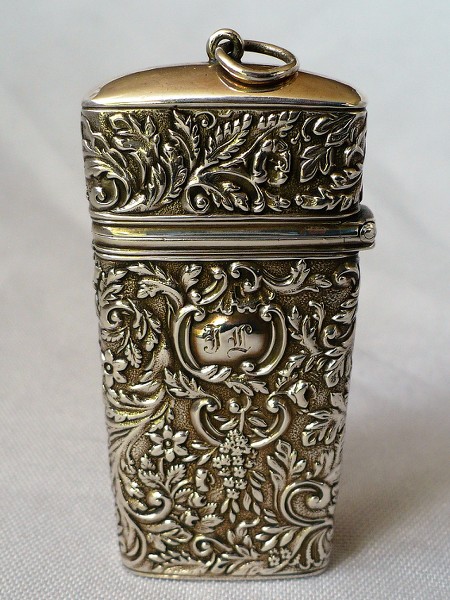 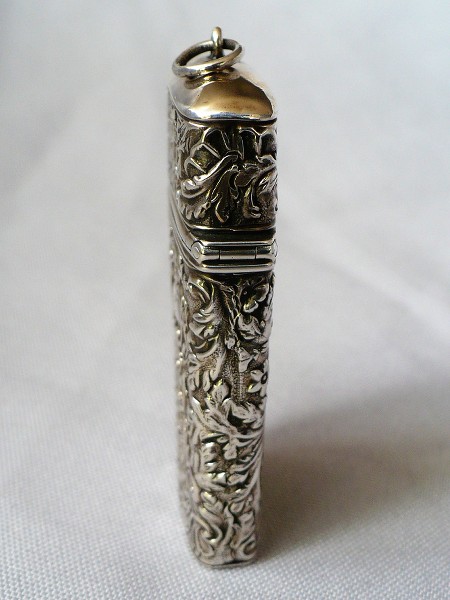 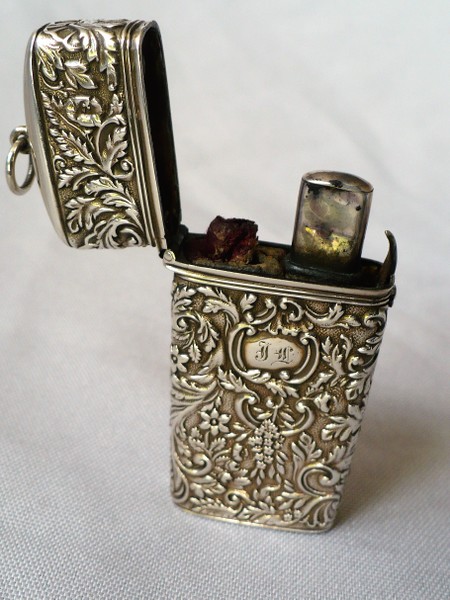 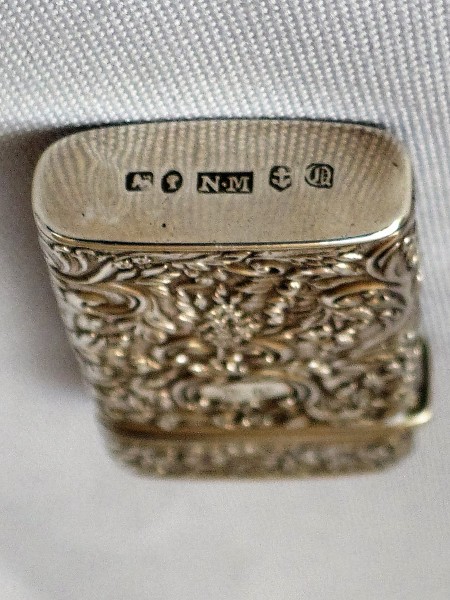 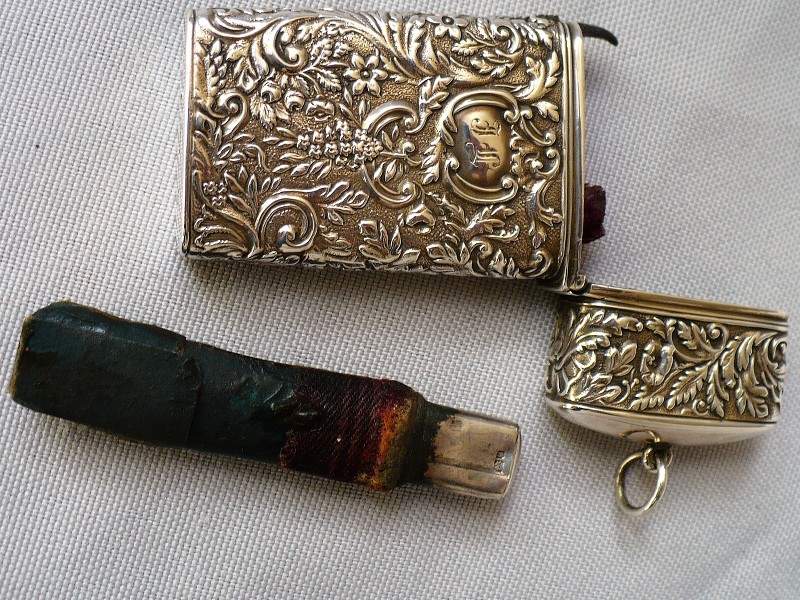 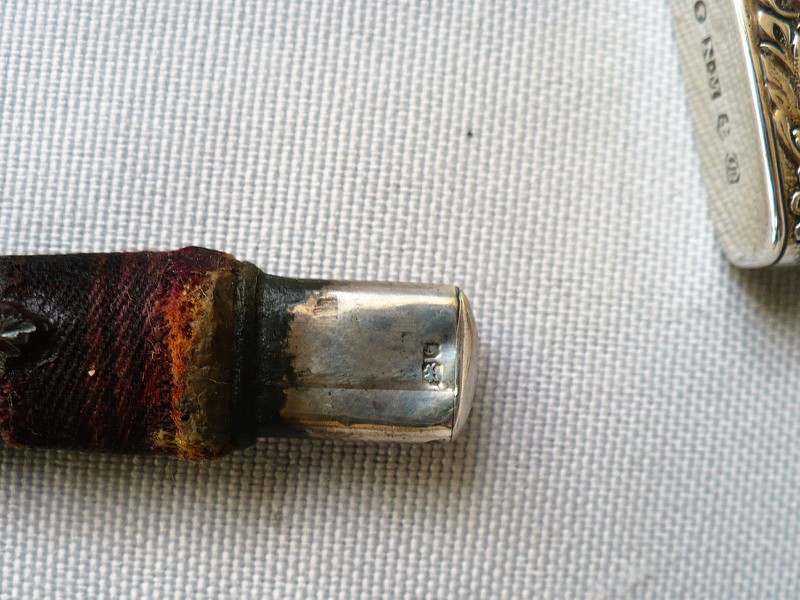 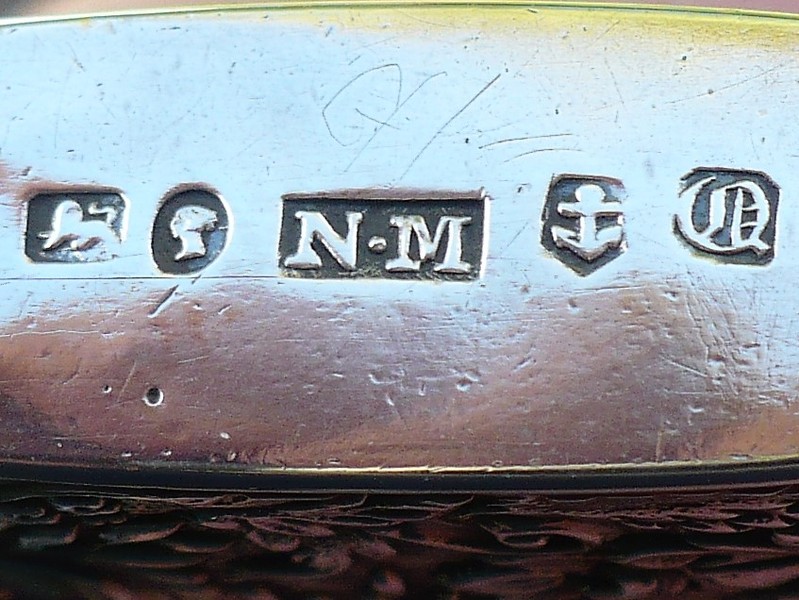 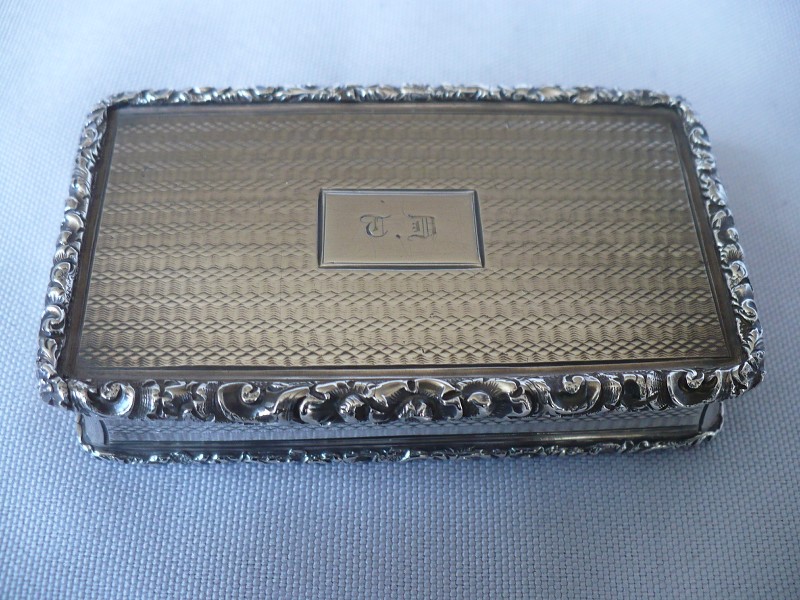 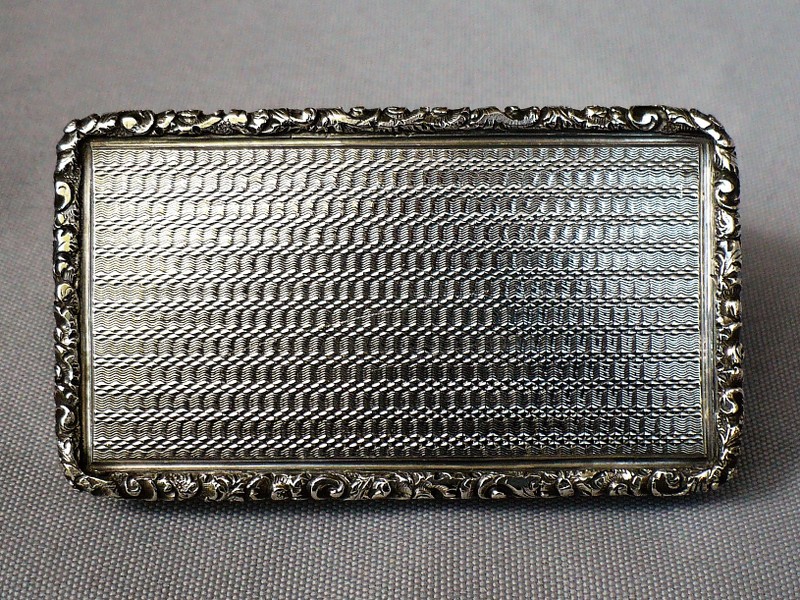 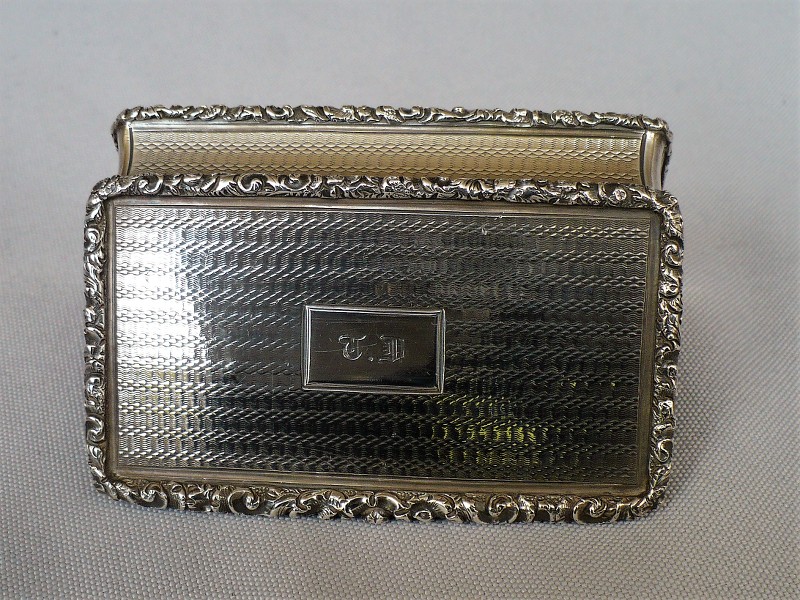 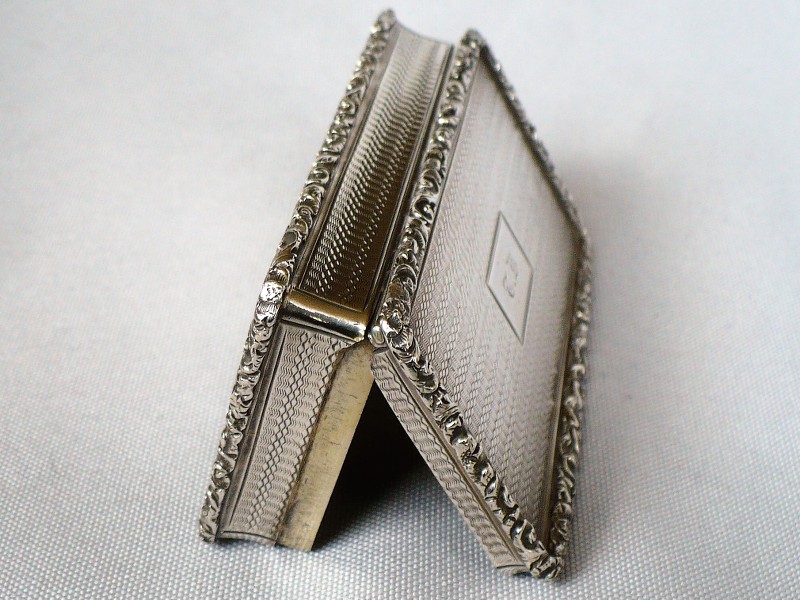 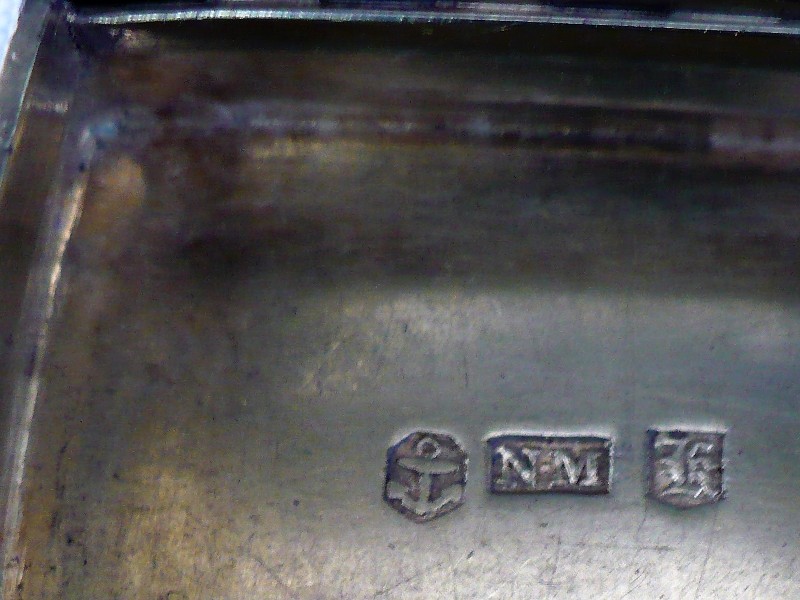 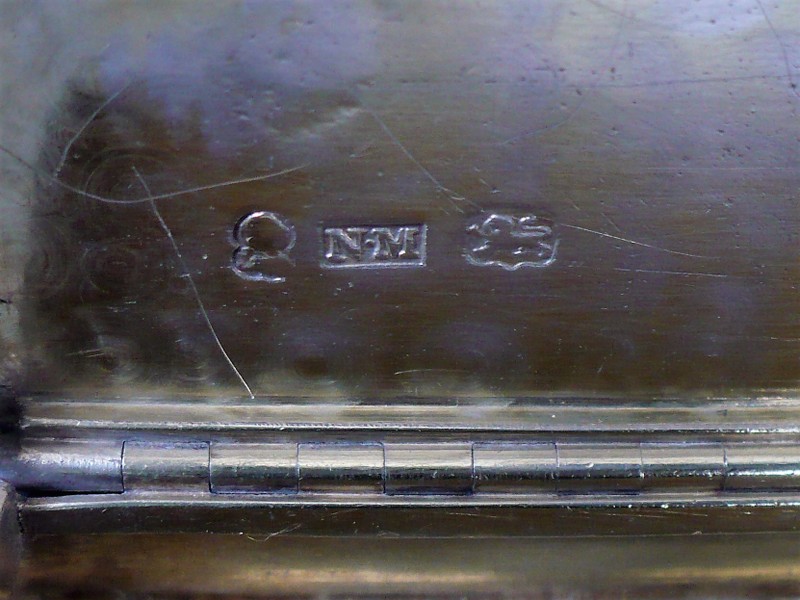