Hello,
I have been trying to research the hallmarks on recent acquisition being a 17th century Maltese silver casting bottle. The marks that I have identified are the 17th century mark of MA surmounted by a Maltese cross, a makers mark of AP in a rectangle which I believe is Andrea Pace, an assay scrape and a further mark of 4 pellets in a circular punch. It is this last circular mark that I would like your help with, I am assuming that it is the mark of either the Grand Master Adrien de Wignacourt or Ramon Perellos but I can find no information on their marks or if indeed they marked the silver. If anyone has any information on Andrea Pace or other silversmiths with this mark that would be extremely helpful in ascertaining the maker.
The bottle is 10.5 cms high and weighs 65 grms.
Thanks for any help you can give.
Regards,
Trevor 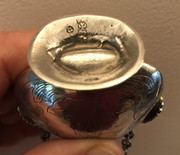 Oddball crazy but Part 2 of Malta assay history (at end) brings Augsburg pyr mark into (select) objects imported to Malta and locally marked or re-marked. Is this circled pips a possible version of one such mark (?): https://andredelicata.wordpress.com
Top

Hi Traintime, thank you for your response. Not crazy at all however looking closely at the mark I cannot associate it with those for Augsburg so the search goes on...perhaps I need to buy a book on Maltese silver!
Top

When I had a Maltese spoon and was researching it a few years ago, I believe I read about a silver expert who worked for either Christie's or Sotheby's and he specialized in Maltese silver so much so that he wrote a book on the subject, he seems to be the best person to contact about this object, I wish I could remember his name but unfortunately I cannot remember. :::

Finding the book by this author or contacting the author might be the best (or only) way to solve this mystery. :::
Top

Hi, I think the book you are referring to is The Silver of Malta by Alaine Apap Bologna, she worked at Christie’s Geneva where she was head of silver and watches. I am trying to source a copy at reasonable cost.
Top

Alaine Apap Bologna's book does not have many photos of marks, it is rather a review of an exhibition of Matese silver.
I have put here below the marks of "MA surmounted by a Maltese cross" that can be found in this book. The one that is most similar is the one circled in red. However, it is an 18th century hallmark.

Likewise the mark of Andrea Pace, which is mentioned here for a pilgrim's flask, dates back to the 18th century.
I had the opportunity to contact Alaine Apap Bologna to ask her for an opinion on a hallmarking and I can assure you that she is an exquisite and kind person.
You might as well ask her your question.
Regards
Amena
Top

I add another sentence from the book The silver of Malta which could shed some light on the subject
A fluted pear-shaped coffee pot (lot 166) on three hoof feet of typical Roman design of the mid 18th century is struck with an intriguing assaymark in addition to the Pinto period six-pellet mint mark (for 11.5 deniers), and that of Annetto Pullicino, who was probably already appointed Consul (1755).
Here the pellets are six instead of four, but it could be for a different fineness.
However, it is always from the 18th century.
Top

Hello Amena, thank you for this information. The assumption that the mark was 17th century was taken from that illustrated in Tardy (which is always open to further interpretation). I have no contact details for Alaine but if you could send me her details on a PM then I would welcome her opinion. There is a flask of similar description in the V&A (museum no : 1058-1905) and which has a description of similar hallmarks but no photos of the object. I have spoken with a contact I have in the the V&A silver department who will send me some photos of the item and it’s hallmarks. I will share this information when I have it.
Top

Hello,
Firstly I need to thank Alaine Apap Bologna for her collaboration in formulating this response, she has a great depth of knowledge of Maltese silver and I have suggested that she joins our forum as I believe her input would be invaluable and we could all learn from her.
Now to the mark in question:
The mark on the flask is the mint mark which was introduced in the Perellos period (1697-1720) and continued to be used by the Master of the Mint or his assistant of the time with each period having a different shape for each Magistracy. This particular mint mark was introduced by Michele Arcangelo Pianta in 1715, who then became Consul for Silversmiths, with the shape of a circle with indents and either four, five or six pellets. The mark on this flask is a circle with indents and four pellets. I attach a better photo to the one I posted earlier.
The mint mark with four, five or six pellets but in a circle is found on items in the 1750s and represents :
four pellets: Maltese standard alloy (circa 835/1000)
five pellets: Roman standard alloy (circa 877/1000)
six pellets: French standard alloy. (circa 930/1000)
Moving on to the assay mark the one on this flask is that indicated in red on the earlier post and is a variant of the ones used in the Manoel de Vilhena period (1722-1736). There are a few of these, but essentially these have an outline around the "MA, Maltese Cross above”-the punches are mostly asymmetrical. The ones used in the Perellos period (1697-1720), as the V&A flask, are comparable to the one illustrated adjacent to it being symmetrical or "a keyhole punch”.
G.M. Pinto (1741-1773), as ambitious as he was, decided to adopt a crown and therefore the assay mark became MA, Mse. Cross and coronet above, in an outlined punch. His successor, G.M. Ximenes de Texada (1773-1775) kept the same style (he didn’t have much time to dedicate to the Mint as Pinto left him an enormous task in improving finances).
G.M. Emanuel de Rohan (1775-1797) however had the marking system revised, with numerous mint marks added. The assay marks used during his Magistracy were ‘F crown above’ for French standard, ‘R crown above' for Roman standard and 'M crown above’ for Maltese standard. All three were closed crowns. These marks were also used during the short Magistracy of G.M. Hompesch.
There is no proof that any marks were used on silver during the French Occupation. Napoleon and Vaubois were too busy melting the huge amount of gold and silver they looted. The only marks found are on silver ingots.
And finally the maker’s mark AP in oblong: Andrea Pace. His mark was registered in 1715, with some twenty silversmiths. This was the first year that the maker’s mark was imposed. Most of the silversmiths in that year had long before practised their craft and were advanced in age. Alaine is of the opinion that is was Michele Arcangelo Pianta, Master of the Mint in 1715 and Vincenzo Menville (of French lineage from Toulouse), Consul for Silversmiths in 1715 who made it legal. Both these silversmiths applied their maker’s mark a few years beforehand, and perhaps, also Andrea Pace.
This is the essence of Alaine's response and I hope I have captured everything correctly.
I said that I would post images of the flask in the V&A who have now kindly forwarded photos of the item. The V&A website has also been updated with these pictures.
Regards,
Trevor