Please teach me a little lesson

Please teach me a little lesson

Hello everyone, and especially those who know about French silver. It is a rather complicated subject and I have already given up on becoming an expert, but I would like to learn at least the basic things.
I saw this chocolate pot on the Internet, described as being from the mid-18th century, re- hallmarket in the 19th. 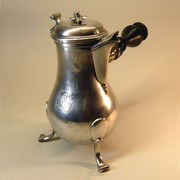 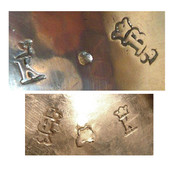 I'd like to know
why the marks of the eighteenth century, on the bottom and on the lid, are only two ?
What exactly are the other marks struck in the 19th century besides Minerva ?
Thanks in advance
Amena

Hello
Not sure I can teach you anything, but here are a few comments.
Your pot was made in Bordeaux, mid-18thC, as seen by the crowned B charge mark and the crowned K poinçon de jurande (date and silver standard). Yes, the third mark between these two marks in the last picture is the maker’s mark, but it is worn and illegible to me.
Items were marked again at a later date for several reasons: the item was submitted for recount, it was repaired or a part replaced, or was sold at auction. The marks on the lid of your pot are very blurred on my device. The only one I can make out with certainty is a Minerva head, the silver standard mark for 950 silver in use 1838-1972. I can’t decipher more than that. If you could provide clear pictures, perhaps someone could give you more information.
If the finial swivels open to fit a muddler, as it appears to do, then this is a chocolate pot; if not, it is a coffee pot.
Good luck in your research on this object!
Regards.
Top

Hi JayT
Thanks for your comments.
Unfortunately I don't have any more photos of the marks since I don't have the item, I just saw it on the Internet.
Your observation is correct, it is a coffee pot because the lid is closed, you can see it well in this photo. 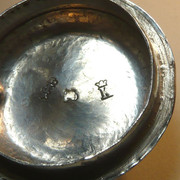