I am hoping for a general clarification on French maker marks within a diamond/lozenge or within a square/rectangle and what it means with respect to them being solid silver or silverplated. 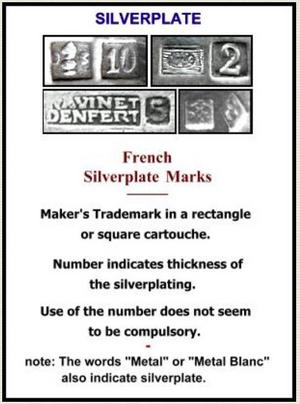 After reviewing the Christofle marks (also on this website https://www.925-1000.com/a_christofle.html), one image depicts a silverplated spoon with a diamond/lozenge maker mark, so it appears the diamond/lozenge cannot always be relied upon to indicate solid silver by itself. 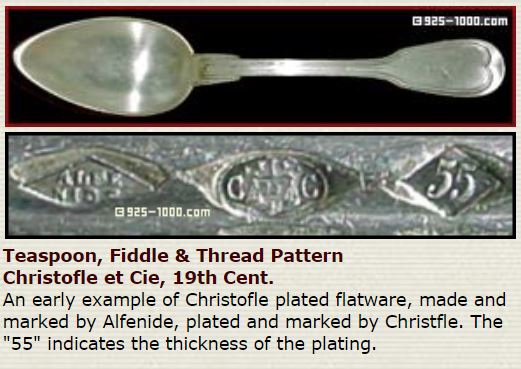 Next, I came across a website (http://www.ascasonline.org/ARTICOLOMARZ180.html) that states that from 1862 onward, the Christofle mark was placed within a rectangle and alludes to "new laws being imposed by the French government" as the reason for the change but doesn't go into great detail about this.

Putting this together, it seems the following statements can be made (neglecting the case of forgeries):


I would appreciate someone letting me know if these statements are valid. Thank you,

As a side note: (http://www.ascasonline.org/ARTICOLOMARZ180.html) states that for Christofle specifically, the thickness of the plating is a small number located between the balance scales on the Christofle maker mark and the number 55 pictured above would actually designate the year of manufacture (1855).

Hello
A French maker’s mark in a lozenge-shaped reserve indicates the object is either 800 or 950 standard silver. The lozenge shape was legislated in 1798, after the Revolution. A silver standard mark must also accompany the maker’s mark. This mark will tell you the standard of the silver used for the object in question: 800 or 950. The silver standard marks changed in appearance over time. See https://www.925-1000.com/Ffrench_marks.html
To summarize, from 1798 to the present day, French silver must have the maker’s mark in a lozenge-shaped reserve, plus a silver standard mark, which is variable in appearance.
As for silver plate, the maker’s mark or the words métal or plaqué should be in a square reserve, as of 1798. You might also find the maker’s trade name in a rectangular reserve. However, control of the marking system for silver plate has been much looser, and large firms such as Christofle did what they could to - shall we say - lull the consumer into thinking they were purchasing what you call solid silver. When asked the quality of the firm’s silver, the response is always “the best.”
Therefore, your statement #2 is not valid.
Hope this helps to clarify.
Regards.
Top

Thank you, this provides a much clearer picture and I appreciate the detailed information!

Regarding the exception to the rule, I wonder if Christofle may have exploited a legal loophole by splitting the manufacturing between 2 companies:

Since the company Alfénide manufactured only base-metal (brass) pieces which it then supplied to Christofle, it may have not been obligated to follow the silver marking system as the pieces would have been entirely brass when they left the workshop. This might have allowed them to stamp pieces with their lozenge shaped company mark without violating any silver marking laws.

After Christofle recieved the pieces and silverplated them, they may have been able to claim that they were not responsible for the lozenge shaped mark stamped by Alfénide, and that Christofle had only added marks that were in compliance with the law.

Finally, the aforementioned changes in French laws may have closed this loophole in 1862 and forced the makers to change their marks.

This is all very speculative, but it might not be too far from the truth.
Top

French makers do not plate brass, but rather nickel silver (métal blanc).

I’m away from my library now, so can’t give specifics about the history of Alfénide and Christofle. Please use the search function for some good info about Alfénide, and their history and relationship with Christofle.

Thank you again for the clarification regarding the shape of the marks, it is much appreciated.
Top
Post Reply
5 posts • Page 1 of 1