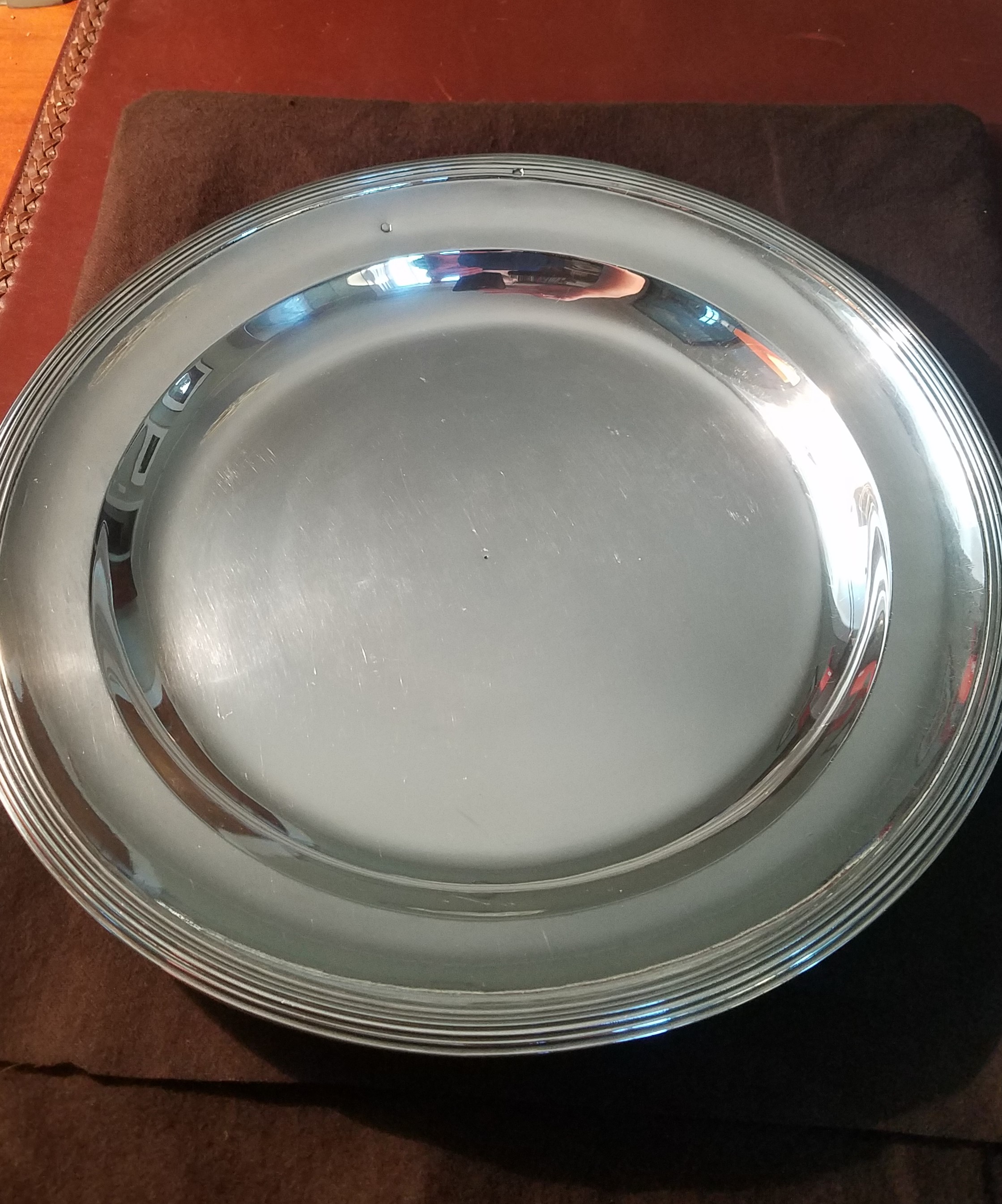 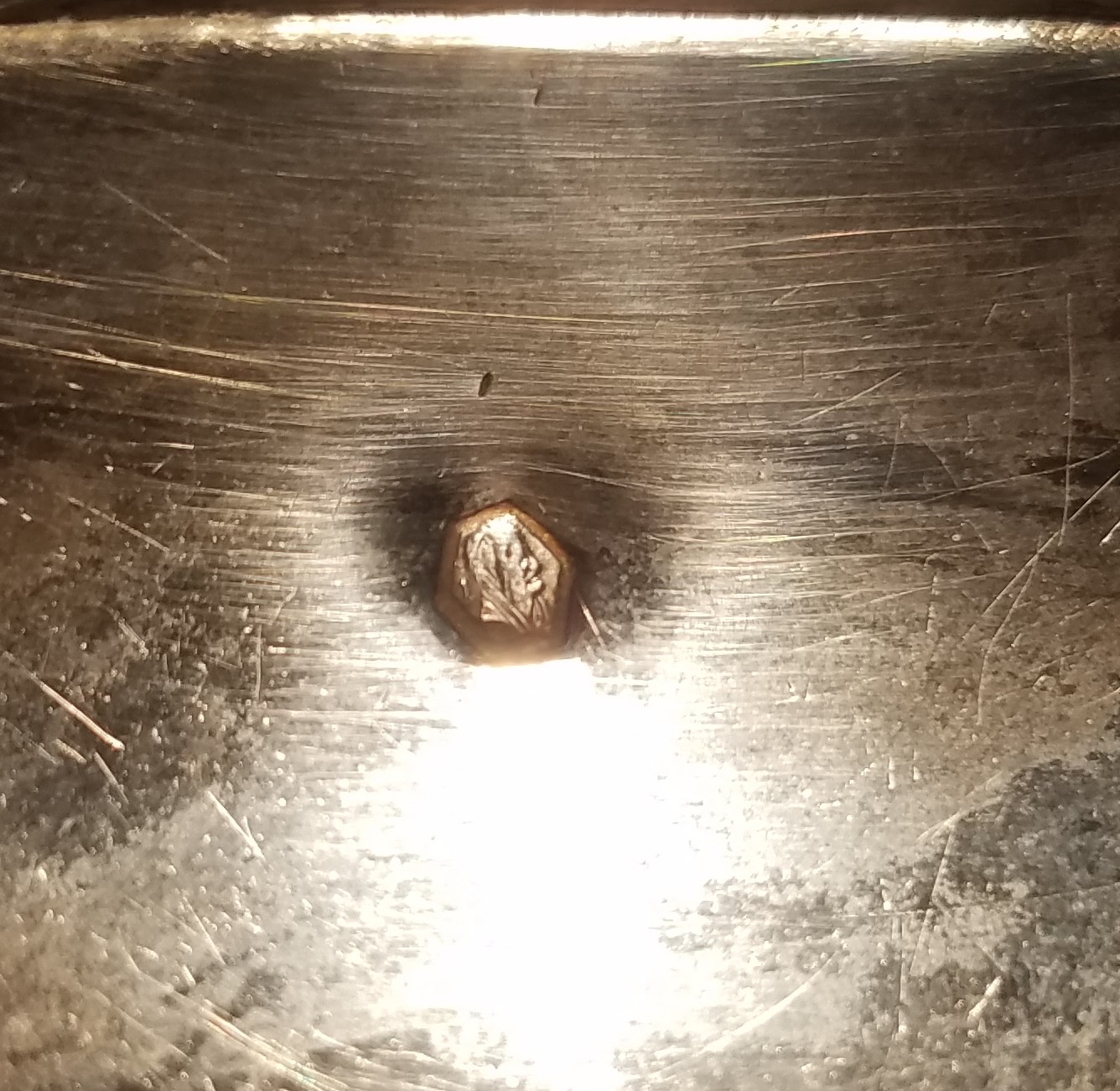 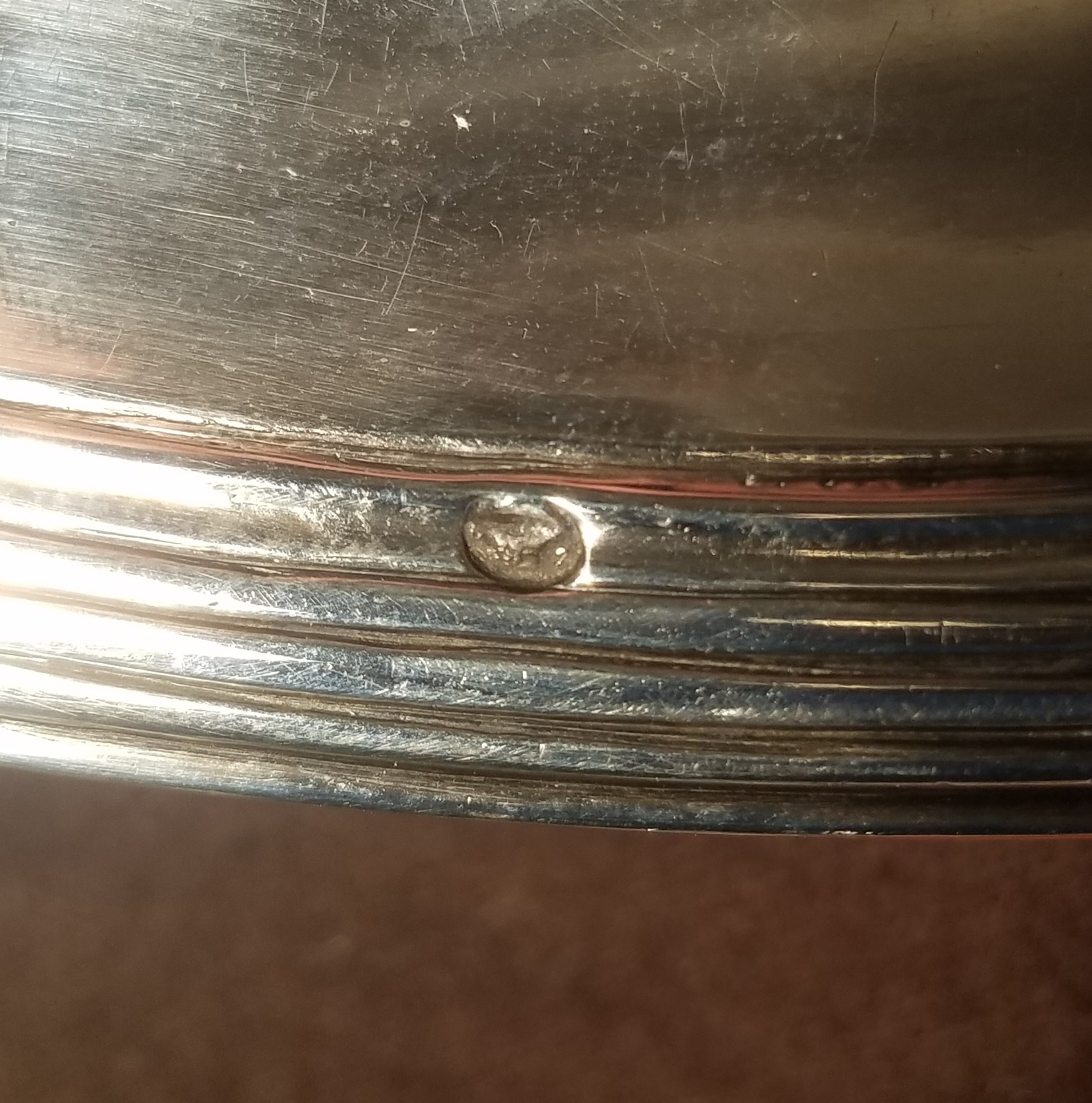 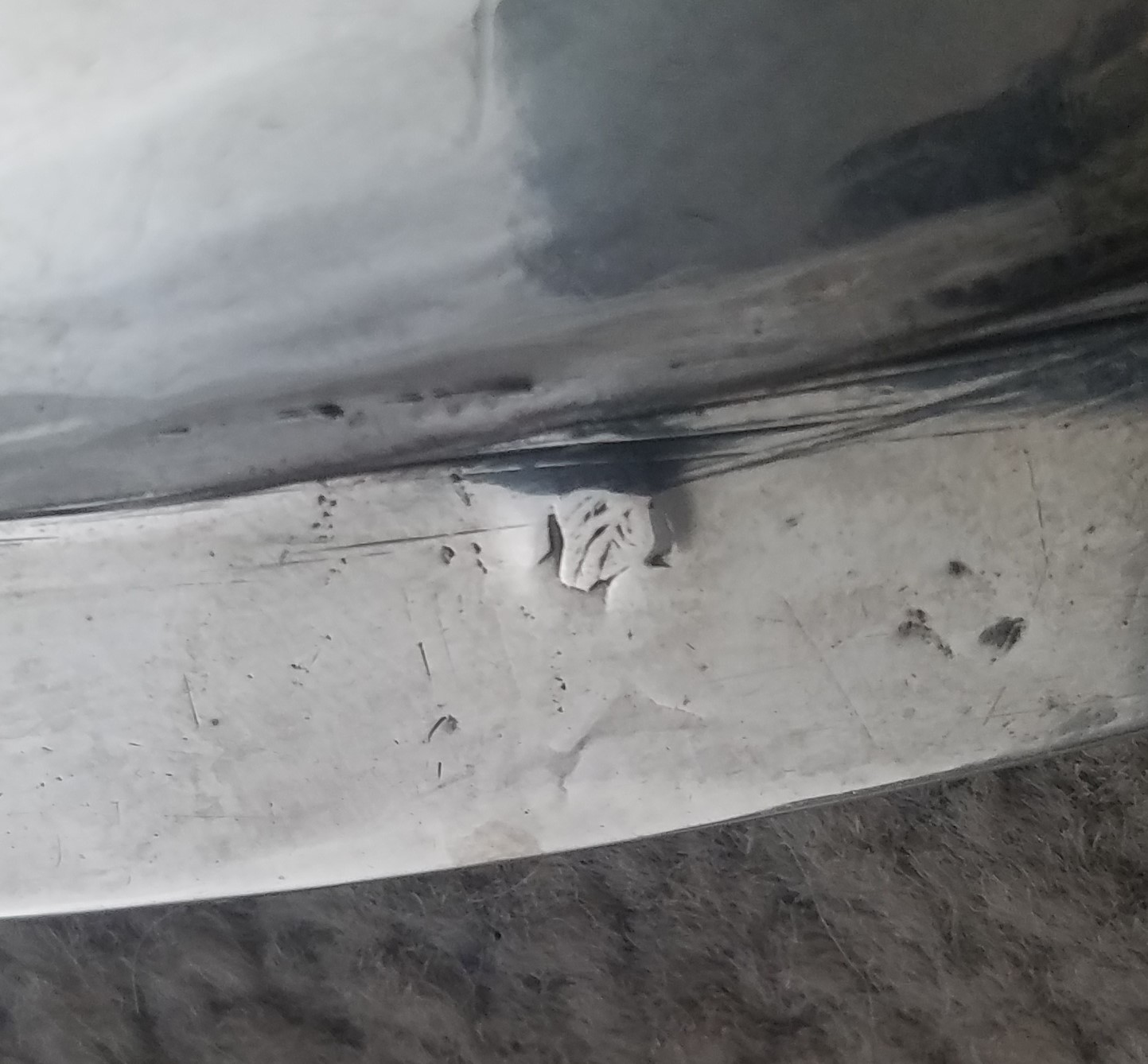 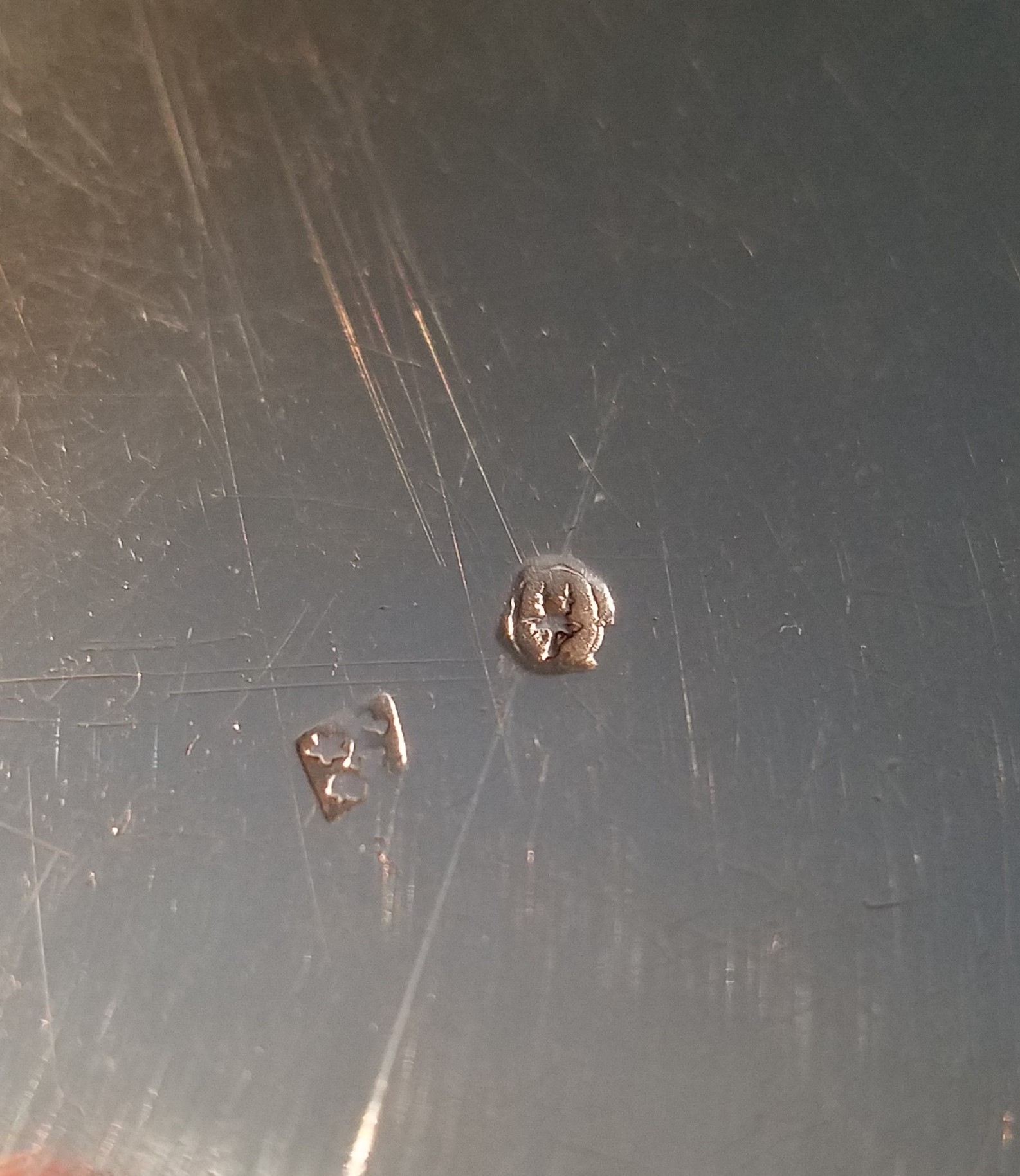 To paraphrase callers on call-in radio shows, I’m a long time lurker and first time poster. (Apologies in advance for any posting mistakes.) I recently acquired a large silver plate/charger (it’s about eleven inches in diameter), and I’m seeking some information about the marks.

The charger is marked on the rim with the provincial 1st standard mark from 1819-1838. It’s also marked with the provincial guarantee mark for the same period, but because the mark is on the reeded band decoration on the edge of the rim, one can only clearly see the bottom half of the mark (the man’s beard and neck), and a department number that looks like it’s either 67 (Lyon?) or 57 (Lille?). The guarantee mark is backed with an insect bigorne mark. The somewhat worn maker’s mark on the back of the plate is a horizontal lozenge with the initials JLG or ILG over a five pointed star.

Based on internet searches, if the department number is 67, it seems this could be the maker Jean-Louis Galliot of Lyon. Can anyone confirm that or offer any other candidates?

Secondly, there’s an additional mark next to the maker’s mark that I've never seen before. It’s an oval with the face of what looks like a stag. My first thought was that this was maybe an import mark for another country, but I couldn't find anything similar except drawing of a mid 19th century Belgian mark for gold items, which wouldn't be applicable in this case. In searching the internet for the maker, however, I found a few references in connection with Lyon makers of this period (including Galliot) to an unidentified mark referred to as a “tete d’antilope.” (See, e.g. https://www.pop.culture.gouv.fr/notice/ ... IM69000524 under the heading "Precisions sur l'inscription") It seems like this mark could be it. Has anyone ever heard of this mark? Were there sometimes local marks in additional to the national marks, maybe for a local silversmiths guild or a locally conducted inventory? I'd be interested in hearing any information or guesses.

Thanks for any help you can provide.

Yes, Jean Louis Galliot of Lyon is the maker; the is the last of his three marks, entered around 1818.

I cannot find any record of his death in Lyon or his home town of Villebois, though the death record of his only son - Jean Baptiste Etienne Galliot (1813-1849) – indicates that Jean Louis was still alive at that time.

As for the antelope head, the short answer is that no one knows. There are other similar marks on Lyon silver of the period, including a rampant lion, a displayed eagle (which appears on some of Galliot’s output), and a lion’s head in a pelleted surround. Chalabi & Jaze-Charvolin offer three hypotheses for these marks: first, that they were some sort of unofficial pre-assay marks analogous to the Parisian Greek woman’s and boar’s heads (see this thread); second, that they were the personal marks of individual assayers, and third, that they were some sort of retailer’s or consortium marks.

None of these theories are without their difficulties. Unlike the Greek woman’s and boar’s heads, the Lyon marks appear to have been used on both silver standards and on pieces that do not have multiple components – this plate being a perfect example. The assayer mark theory appears to be contradicted by comparing the working dates of makers to that of assayers which show the same mark on works of makers that could not have been assayed by the same assayer. The retailer/consortium mark seems the most plausible to me, but the problem there is that there is no evidence or precedent to support the theory.

Thank you so much, Blakstone, for the interesting information! I'm always amazed by this forum and how helpful you guys are.