I came across this mustard spoon marked in a lozenge ‘Boin’ no other symbols in the lozenge. Is this the mark of Georges Boin? I cannot find reference to this mark online so if anyone could help give a rough date also it would be great. It’s also marked for 950 silver. 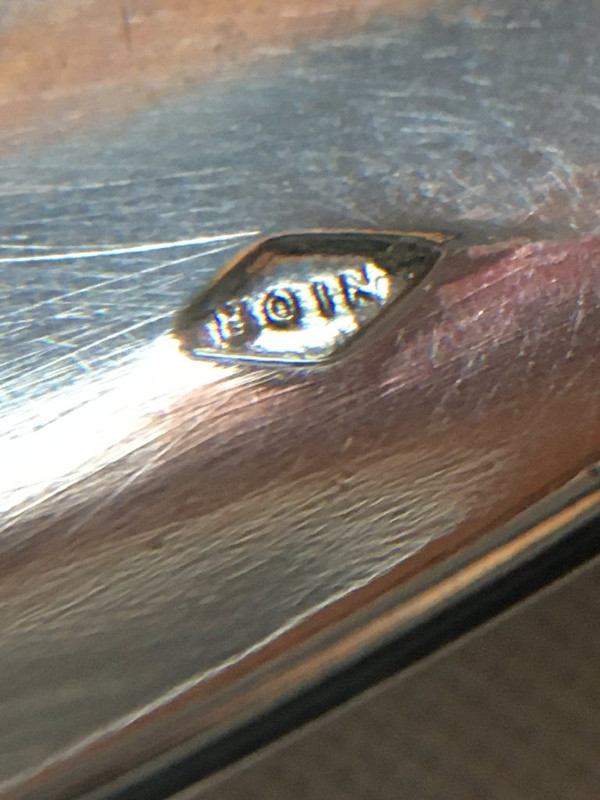 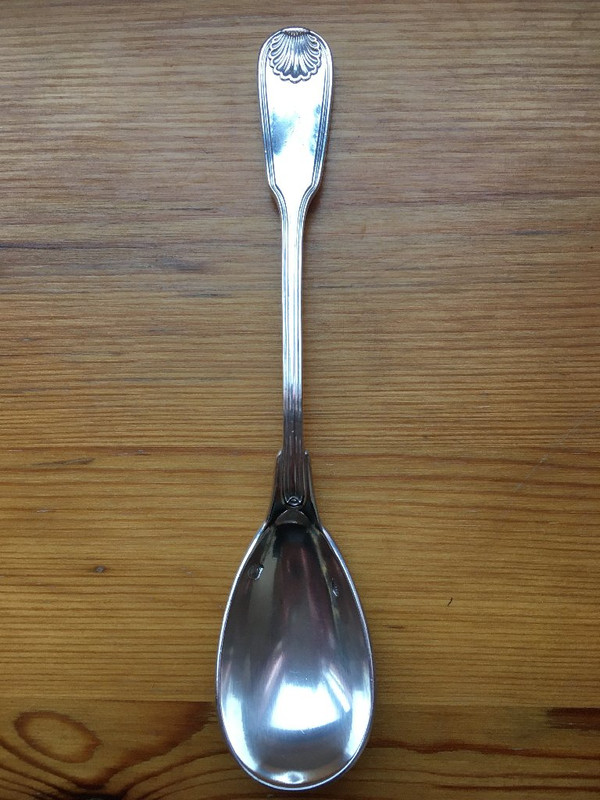 Hi,
There was The Boin-Taburet metalwork firm,established in 1873 by George Boin (the antique dealer) and Emile Taburet (the jeweller).
Located in Paris, 3 rue Pasquier.Have seen their mark with other makar`s marks,meaning they were retailers,too.
Hopefully,more knowledgeable members will clarify isolated Boin mark.
Regards
Top

David Allan shows 2 serving pieces marked Boin alone, that he attributes to Georges Boin and dates to circa 1875.

I personally have seen flatware by Georges Boin with the mark G. Boin, symbol a stool (un tabouret), a mnemonic for Taburet. Arminjon doesn’t have an entry for Boin.

Born in 1849, Boin came from a family of antique dealers and jewellers. For many years his grandfather and father managed the upscale shop, L’escalier de Cristal. The Boin-Taburet partnership was formed in Paris at 3 rue Pasquier in about 1873. Boin was Émile Taburet’s son-in-law, and was a great collector of 18th C French silver in the Rococo style. The firm won numerous prizes at the Espositions Universelles of 1878 and 1889 for high quality Rococo style silver, inspired by pieces in Boin’s personal collection of antiques.

Boin then went into business with Henry in about 1900 under the name of Boin et Henry Orfèvres. Presumably Boin either retired or died, because by 1906 the company was called Henry Frères et Cie, then in 1936 became Henry et Fils.

So the history of Boin as a maker is a bit confused.

Your spoon probably dates to the last quarter of the 19th C.

By the shape, this spoon in the Shell Thread pattern (Filet Coquille) could be an egg spoon if it is 12-14 cm in length.

Wonderful thankyou for the information. It is 12.7cm long and weighs 34g.

There’s a Marquis crest that I’ve posted pictures of (see the Family crest section here on this forum).

My pleasure to help.

It appears to be an egg spoon.

Sorry I can’t identify the crest.

Taburet was joined in partnership by his son-in-law, George Boin, as Taburet & Boin at least by the late 1870s, and was succeeded by him as G. Boin in 1880

Boin’s mother, Victorine Caillot, was the daughter of jeweler Pierre Caillot [Arminjon I:2861]. Boin (who sometimes used the name Boin-Taburet) was succeeded by Henry Frères (Ernest & Georges Henry) in 1901, though Boin-Taburet was still involved with the firm as a prominent expert appraiser of jewelry and silver.