Hi friends!i got this beautiful cup.Please tell me your opinion about hallmarks.Thank you very much!

Hello
I’m at a disadvantage here because I’m looking at your pictures on a mobile device, and they’re not in focus to begin with. On the base of the beaker you have a charge mark of an A in a circle, a date letter of a crowned P, and a maker’s mark. The number between the legs of the A will give you the year, as will the 2 digits under the crown on top of the P. On the exterior there is a discharge mark of a leaf in a circular reserve. These marks are all in concordance.

However, in my opinion the timbale has been repaired and modified, and the gadrooned foot is not original to the object. The foot is out of proportion to the body (too small in circumference). You can see that the maker’s mark has been cut off on the right as a consequence of the repair/replacement. You might also check if the base with the marks might have been dropped in from another timbale of later manufacture. Timbales often get quite beat up, and extensive repairs are common.

The maker’s mark is that of Pierre-Antoine Famechon who registered on 20 July 1785: a crowned fleur-de-lys, PAF, 2 grains, and a Holy Spirit as symbol. He worked in Paris on rue de la Calandre (nos. 13 and 46). In 1792 he was 32 years old, and listed in the Almanach Royal as a silversmith who was registered as a voter in the Notre-Dame district. No end date is given.

Hi,
Tulip beaker on pedestal (Timbale tulipe sur piédouche).
JayT observation is correct;
The foot (pedestal) was so badly damaged it had to be replaced with a new one, being of smaller diameter the maker`s mark was partially obliterated when soldered.
Regards
Top

Thank you for you quick response.
I polished the cup and looks like were no repairs to the base,i saw other cups(timbale) with such small foot base.
The cup is in a very good condition for age.
And the hallmarks looks good:the crowned P for Paris 1789 and Famechon silversimth same period.I can.t recognize the small discharge on the body and the big A looks like small charge for Paris 1780-1791.
I send some detailed pictures,the last is inside the cup,the two black spots are just tarnish.

It is difficult to say whether this object has been repaired without handling it in person. Timbales are frequently repaired because they are heavily used items. To me, the maker’s mark that has been truncated on the right is the give-away that there has been some work done.
Enjoy your timbale!
Top

The very size of the foot base may be debatable but there are clear signs of foot repair (red arrow) and maker's mark is cut almost in half because the base was soldered over it.There is no way to apply a punching tool on uneven rim of the base unless the original base was removed and the new base soldered over the mark.Besides,the traces of filing are still visible.I have done repairs like this,one must take more care to hide traces of repair, this one is too obvious.
Regards 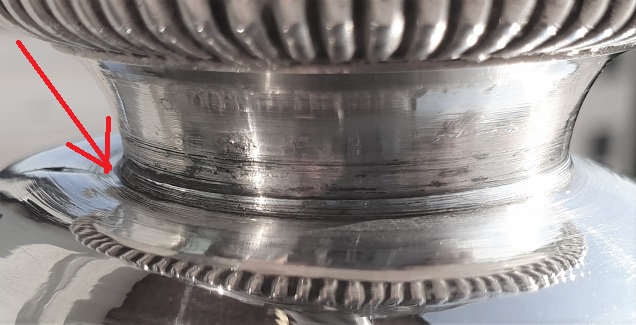 Thank you very much,your experience is priceless!
It.s a beautiful piece of history but seems like it.s not without repairs
Regards!
Top
Post Reply
7 posts • Page 1 of 1