by neurorocker
I'm unsure of this maker and was unable to locate this mark. I'm hopeful that someone can help. I hope you are all keeping well. 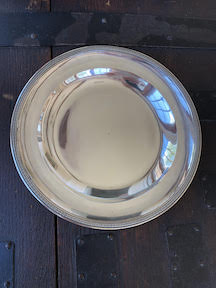 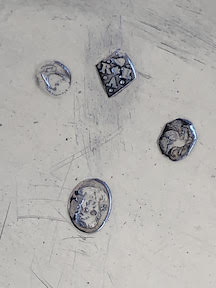 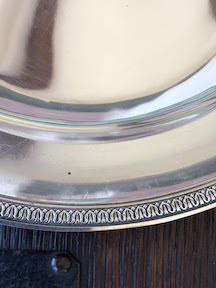 by JayT
The maker of your plate was Richard-Emile Agu, mark a horse head between two dials (une tête de cheval entre deux molettes). Agu, a hollowware maker, worked in Paris on rue St-Honoré, first registering a mark in 1805-1806. In 1813 he was on the Île St-Louis, terrain des Capucins. No end date is given. Your plate can be dated with some exactitude from between 1805, when Agu first registered, and 1809, the end of the period shown by the standing cock in an octagonal reserve. It appears to have been an under plate for a tureen or other vessel, with decoration in the Empire style.

He had at least two sons, Amand François Agu (b. ca. 1813) and Alexandre Henri Agu, (b. 12 Jul 1817). He does not appear in the Paris Almanac as a silversmith after 1813, and his profession on the 1817 record of Alexandre's birth is as an employee, though in what industry it is not stated. His death records lists him as a "rentier", i.e., with a private income, so he presumably was well enough off to retire at some point.

by neurorocker
I'm glad I thought to check this thread as I missed your replies earlier. My apologies for that. I am very thankful to you for your help, blakstone and JayT! I have a few more pieces I will post shortly.