This eye bath may have come from a nécessaire probably made in Paris in the early 19th century. The maker's mark is unfortunately very small but seems to contain the initials OJJH or OJJN. Can anyone identify the silversmith? 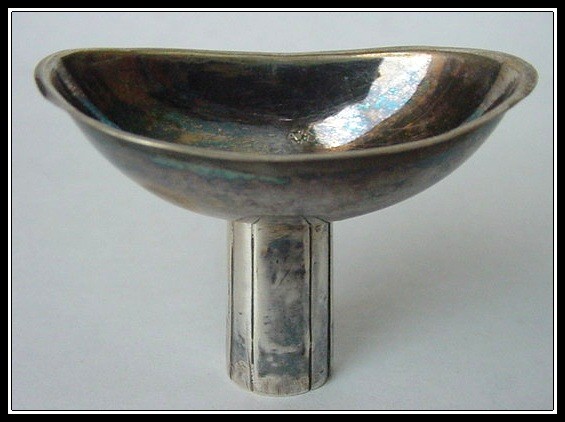 Is that the only mark on the item?

Is that the only mark on the item?

When I see the blue patina, I think it's a silver plate patina.
Top

Hello,
There are 2 other marks on the eye bath bowl but the eye bath belongs to a collector colleague in the USA and he doesn't have a macro lens!
However it sounds as if 1 mark is the rabbit's head and the other is probably the crab.
(As before, I think the eye bath was probably made in Paris in the early 19th century.)
Regards,
George.
Top

It's the mark of Jacques-Jeremie Hubert, buckler, working at 40 rue de Montmorency-Reunion, mark registered 1805-1806 with no cancellation date noted. (The "O" is not an initial, but part of the device: a coquille under a ring.)

I was unable to find much information on him. Searching his name I find a dental mirror, some flatware and a few other small items by him, some of which also have the Minerva mark, indicating he was working as late as 1838. However, he definitely died before his wife, Marguerite Nicolle Rosalie Rodollet, who is named as his widow on her death record of 25 April 1841 and the inventory of her estate.

Thank you so much Blakstone. I am sure your attribution is correct and I am most grateful.
Regards,
George.
Top
Post Reply
6 posts • Page 1 of 1