Thanks in advance Mandy

Hi,
George III presentation snuffbox made of gold and royal cipher set in diamonds.Royalty seldom, if ever, owned or presented medium quality items.
Royal ciphers of both George III and IV can be googled.They are different from yours, though.
Regards 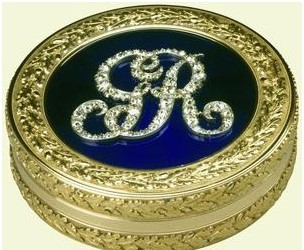 Hi Thanks for the info, do you have any idea who else may use this mark with a coronet

The engraving depicts imperial crown of state worn by George III on his coronation,as well as ``GR`` cipher for Georgivs Rex.
(There are variations in depicting the crown an royal cipher).
Many items and souvenirs were produced to celebrate George III golden jubilee in 1810 (silver, medals, engraved glass, wooden carved boxes, even kitchen creamware flummery molds).In a word,it could be associated with the jubilee, but certainly not owned by him.
Another possibility is a token commemorating his recovery from illness in 1789.

I have been doing a lot of research on this box since our last contact and have found a little information, not all Royal snuff boxes for personal use were diamond and gold encrusted, but the most imported part is this box comes with a label inside, i will know more when i receive it myself, it may have been part of George lV collection , i will let you know more when i get it

Thank you for any additional info.The attribution (personal belonging) must be supported by reliable written documents and references or at least reliable provenance.`Everything else is wishful thinking.
Regards
Top

I wont know exactly what is written until it arrives
Top

I have had confirmation from the Royal collections at Windsor Castle that the cipher is for George lV, and that the box my have contained a miniature or watch and may have been intended for presentation by King George lV , they also say the label stating it belonged to George lV is more than likely Victorian, so this is not a commemorative box, hopefully more will come to light, but its interesting doing the research