by JanGroen
Good day
I am trying to find out a bit more about this coat of arms. It is the arms for the town Rochester but the H.M.S Rochester was a ship. It is on the front of a silver pill box. 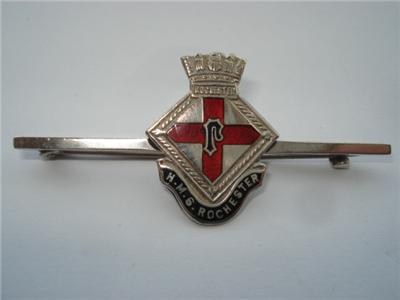 by Waylander
The 1930's dating relates to the 4th ship of the Royal Navy with that designation. Some information, for the sake of completeness (credit to Wikipedia but the information has been abbreviated):

by nobilityhouse
The city of Rochester arms have a lion passant or in chief and a mural crown. The Rochester arms are unusual for the inclusion of a letter of the alphabet. The lion recalls that Rochester was originally a royal borough. The arms for the ship, without the lion and with a naval crown are taken in honor of the city. Kind regards.
All times are UTC-04:00
Page 1 of 1
Powered by phpBB® Forum Software © phpBB Limited
https://www.phpbb.com/