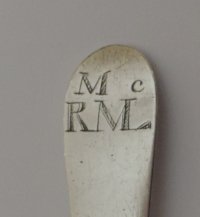 Earlier this year, I acquired by online auction a small (5.5 in long) battered teaspoon, with the mark "AMP INS" on it.

The auction house ascribed it to Alexander MacRae of Inverness. It was from a house clearance, and they were unable to give me any further information on its provenance.

In the 2014 edition of "Illustrated Dictionary of Scottish Provincial Silversmiths & Their Marks", Turner ascribes this mark to "Alexander MacRae?" on page 66, and to Alexander McLeod of Inverness on page 97. Mr Turner told me that this was on advice from auctioneers. I can see how a circle of possible misinformation could arise - auctioneers suggest something to Mr Turner, he publishes it, other auctioneers refer to his book...

Given that both MacRae and McLeod had their own marks, which couldn't be confused with any other Inverness silversmith, then I don't see why "AMP" should belong to either of them.

On page 48 of "Highland Gold & Silversmiths", Moss & Roe have a short entry about Alexander MacPherson of Inverness, noting that he died in April 1789, just over 13 months after being admitted to membership of the local Incorporation of Hammermen. They saw no examples of his mark, but they record that the former curator of Inverness Museum, in her notes for a booklet on local silversmiths, states that she had seen the mark "AMP,INS" on a few items, but that MacPherson's work is scarce. I consulted those notes on a visit to Inverness: unfortunately, they are typewritten - I was hoping for a sketch or two - and it is not possible to conclude whether she had been looking at marks similar to those on my spoon.

The archive of the Institute of Goldsmiths of the City of Edinburgh has an entry for MacPherson, but no further information.

So, basically, I am stumped. I would be interested to know if anyone has seen any "AMP" marks, and if they look anything like those above.

I would also be interested in any views on the spoon itself. Is the style appropriate for 1788-89? The engraving of the initials on the terminal looks, to me, rather crude for an incorporated hammerman - what do you think?

Thank you for posting these excellent images. I've never come across those marks before and only wish I could add something positive to this interesting topic.

Of course, it's more than likely, far more, that you've nailed the maker.

The spoon itself is fine for MacPherson's period and I see nothing wrong with the engraving, which is charming, and perhaps by MacPherson's own hand, given that both his mark and the engraving contain conjoined letters.

Hopefully another member can add something. I note that Margaret McDougall, the former former curator of Inverness Museum, passed away many years ago.

Thank you, Trev, for your welcome, and for your kind reply.

I have been interested in silver from Inverness (my home town) for about 5 or 6 years now. The only other time that I have seen a similar mark was on a spoon on eBay in May 2017. It was said to be by McLeod of Inverness. I didn't bid for it, partly because of what was said to be "later, Victorian decoration", and partly because I didn't like the look of the mark. Someone subsequently told me that it's not unknown for a Scottish provincial smith to gouge out their initials using a nail, so maybe I should have gone for it.

Here are pictures of it. 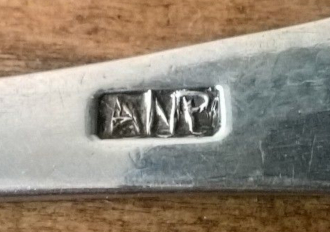 Great spoon. As to Richards book it is collated information from auctioneers and the likes so some of the attributions are out of date and some simply don’t stand up to scrutiny. It’s a hard subject Scottish Provincial as there’s a lack of information anywhere.

Really interested to see that photo of the scratched makers mark, I have two spoons (said to be Scottish Provincial) that are marked in the same manner but HWN.

If you’re in Inverness go visit Iain Marr’s shop in Beauly - all I can say is it’s a Collectors heaven!