This Fiddle pattern teaspoon is quite crudely made and has sharp shoulders and an oar-shaped handle. The maker, GF, has struck his mark once clearly and then half of his mark three times. Can anyone suggest a maker?

Do you think it might be George Ferris of Exeter, although I have to say I have only ever seen his mark in two circles.

Hello Miles,
It couldn't be George Fenwick of Edinburgh could it? He worked there from around 1807 (Jackson's 2002 Edition pages 551 & 562).
I've seen a caddy spoon of his at some time so he's a known flatware maker.

Hi Tongtwister, George Ferris was my first thought when I looked at the marks, but, as you say, he used a two circle stamp.

Mike, Fenwick's mark is pretty much identical, and the spoon does have a Scottish look about it, so I think you're right.
I wonder why, as an Edinburgh maker, he marked this spoon the way he did; did he perhaps have provincial beginnings?

Mike’s attribution of this being the mark of George Fenwick looks good to me too, and opens the field to some interesting questions.
Firstly, why would this spoon be marked in this way?

George Fenwick was in partnership until c.1807 with George McHattie so we can safely date the GF mark as being after that date, and it is noted that he worked as an ‘UnFreeman’ until 1810. This could possibly be for two reasons that I can think of. It maybe because he was working outside of the city limits of Edinburgh, so that it would not be a requirement for him to be a Freeman, or it may simply be that he was not able, or did not care to pay the dues that on becoming a Freeman that he would be required to pay. If it was a case of him being resentful of paying such dues, then maybe it follows that he was also resentful of paying Duty and assay fees.

But Hallmarking in Edinburgh by this time was quite formalised, (as against the rest of Scotland) and the practise of ‘Duty Dodging’ by an Edinburgh registered silversmith would, I think, be quite unusual at this date. So maybe there is another reason. (At this point, it will be remembered that in line with previous posts of mine that the imagination tends to run riot!)

George Fenwick’s son, also George, and a former apprentice to his father, emigrated to Tobago in 1820. GF I had become Deacon to the Incorporation of Goldsmiths of Edinburgh in 1819, maybe at this point he ceased being an active silversmith and passed everything of his trade, including his punches to his son, to assist him in his new life in the West Indies. If so, then we could be looking at a very rare colonial spoon, rather than a Scottish one.

Miles, you said the spoon was somewhat crudely made. Could this be because it was made by an unwell silversmith? George Fenwick II died within months of his arrival in Tobago.

That's all very interesting; if only Freemen were allowed to take items to be assayed, then this spoon could have been made between 1807 and 1810. Of course, it's possible that Fenwick made it later than this and simply avoided the duty charges.

I shouldn't have said it was "crudely made", low quality describes it better.

Could I ask where you found your information?

Only Freeman were allowed to pratice their trade within the city limits, the fact that GF I had not taken up his right to Freedom suggests that he was working on the fringe of Edinburgh. Anyone who was registered at the Edinburgh Assay Office could have their work assayed, no matter where they were based.

The info on the Fenwicks' is available online at:

Hello again Miles,
If you've followed Trev's web trail to the Edinburgh assay office site you probably now wonder, as do I, why Fenwick was not only appointed Deacon but also joint Assay Master in 1824 and Master on his own in 1835 until his retirement in 1853. Not the sort of post you'd expect for a non payer of the Duty?
Looking again at the punch marks the one to the left seems to me to have ever been only half a mark. If it had been the full GF wouldn't it have overlapped the preceding (two star?) mark? Similarly the central GF mark would have only just enough room not to overlap the third GF mark. It's also odd that the second F has disappeared when the next G is relatively intact, again suggesting only half the second GF mark was successfully made.
With the possible marking mess this spoon was in perhaps it's not surprising it never reached the assay? Regards, Mike
.
Top

It does seem odd that a duty dodger should reach such high positions; perhaps he was never discovered.

Are you suggesting that the marking was innocently botched? I don't think this is the case. What you called the "two star" mark is actually the right-hand edge of the F stamped vertically: it has the same imperfection as the GF mark.
I accuse Mr Fenwick, or whoever it was that marked this spoon, of intentionally tilting the GF stamp so that only half would be visible. Perhaps he thought that the G resembled the duty head.

Hello Miles,
I think Mr Fenwick does have an advocate for his innocence here.
There seem too many mistakes in the punches to be a Duty dodging ploy and after all there's still a clear GF mark to trace the spoon back to him.
What's perhaps less explicable is why he didn't simply put the spoon in the scrap bin but this is Edinburgh and maybe he kept it for himself.
Regards,
Mike
.
Top

Here is a set of spoons to add to this old post!

This is a set of six teaspoons. Also a bit crudely made. With just a single maker's mark - GF.

There is an essay on George Fenwick with sterling silver candlesticks with full English hallmarks with another TOBAGO hallmark, just to add to this mystery, to see a TOBAGO hallmark on English Silver is quite interesting indeed....
Top

Which essay is that?
Top

Another topic that may be of interest:

Another GF marked item....... A typically Scottish style salt spoon but the silver is unusually soft and bright. I wonder if this made in Tobago? No way of knowing and maybe wishful thinking! 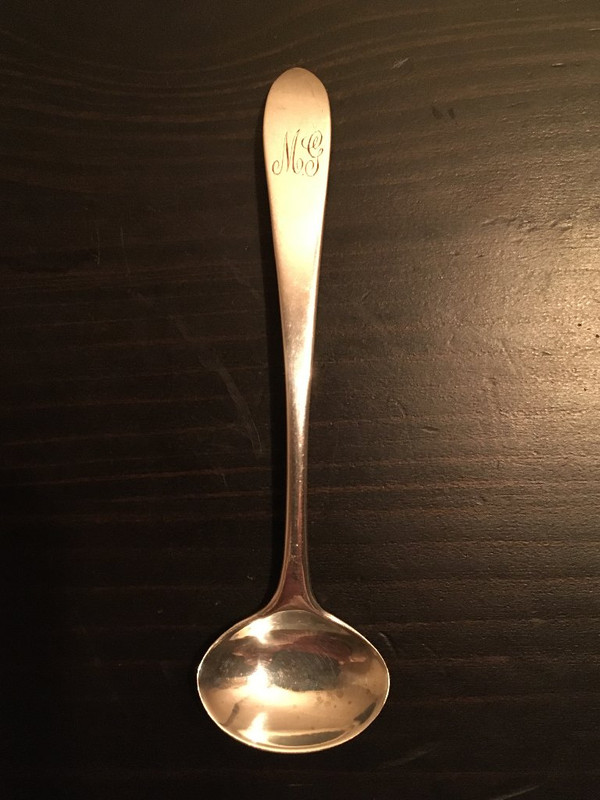 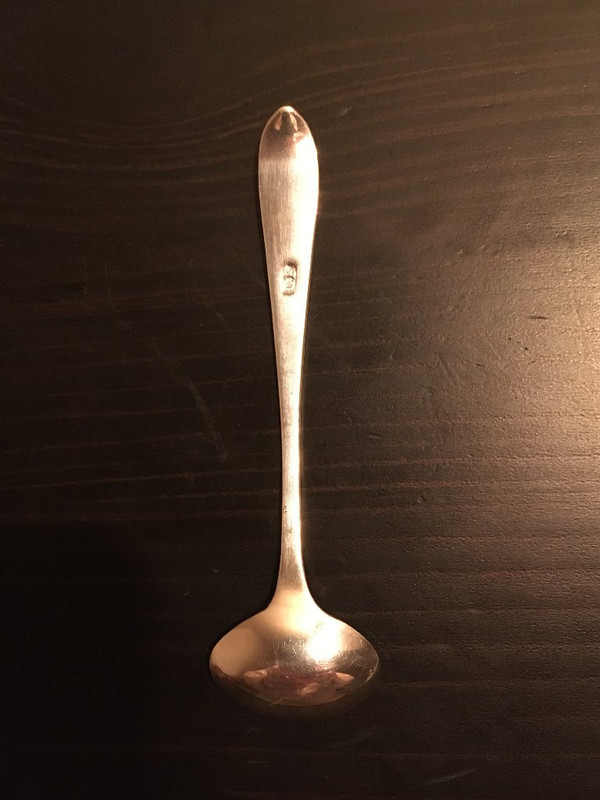 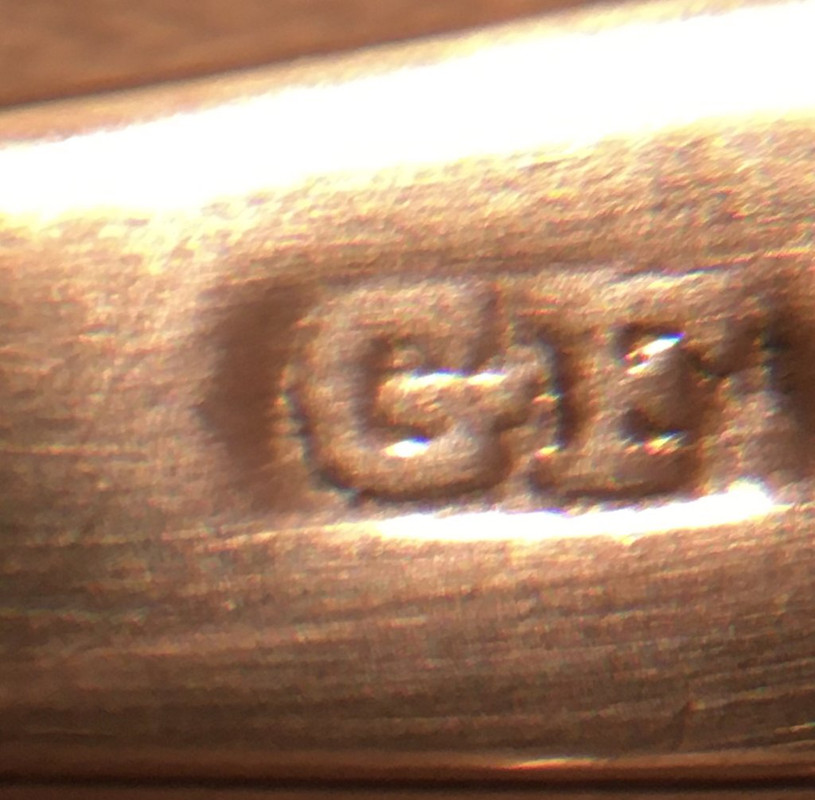