Hello again. I cast my net for silver spoons at an auction recently, but I failed, for the lots I wanted. To avoid total disappointment I bid on and won some relatively mundane tea type spoons. I did think they were mundane until I came to identify the marks. 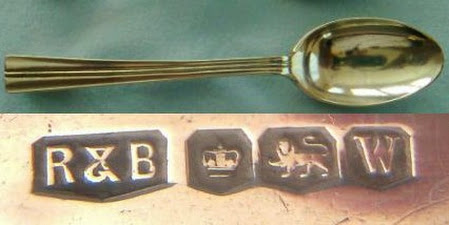 The spoons above had been catalogued as Sheffield 1964 though I did believe it looked a bit Art Deco in style. Date letter "W" in an "upper case" run was correct for 1964. However the date letter for 1939 in a "lower case" run appeared virtually the same! The makers mark of the spoon is of little use as it is that of the long established "R&B". Thus I thought there must be something different in the "lion" or the "crown" to separate the 2 years. I checked 2 of my pocket reference books (I could not find the third one). Was the "Guild" stamp" a bit more pointy at the bottom in one of the runs? Was the "crown" marginally higher in the less pointy Guild stamp? I looked at photos of some of my collected late silver spoons and reviewed some of the good pictures listed on that inter net auction site we all love. I could make no concrete conclusions. I am hoping the forum can give me some clarity on these 20th century Sheffield date letter runs. I note not just my "w" is involved as "C","O","P","V","X" and "Z" also seem readily confusable. I knew there was confusion with George III London date letters but this was from the 20th Century. My spoon hallmarks show little ware so the problem must be compounded when ware is present.
You may have noted I have decided "w" and thus 1939 as the year. Below is what I am regarding as possible confirming evidence for this particular spoon! Any comments?

Re: 20th Century Sheffield date letters “W/w” and others

Re: 20th Century Sheffield date letters “W/w” and others

Thank you Silvermakersmarks, a quick response and totally comprehensive for my problem. Have you been asked that question before? When viewing your reply and able to compare your great images it is easy to note differences between the upper and lower case letters. The upper case “W” is not show on my spoon and confirms its date as 1939.
I bet I will be only one of many “Silvers” to add this web page to their bookmarked lists.
Thanks
Fishless
Top
Post Reply
3 posts • Page 1 of 1