Here we have a Newcastle assayed Kings Pattern dessert spoon. It is single struck, a common feature on Scottish and Newcastle examples, bearing the date letter for 1866 and struck with the maker's mark of Gowland Brothers (George Hay Gowland (b.1829-d.1894) and Clement Gowland II (b.1833-d.1873)). They entered their marks at the Newcastle Assay Office on the 30th July 1852 as 'George Gowland and Brother Goldsmith'. For the alternative mark registered by them see: http://www.925-1000.com/dlNewcastle.html

It is the maker's mark that makes this spoon of interest for in 1866, according to the Newcastle assay ledgers, the Gowland Brothers never made any submissions, nor did they make any during any other year. Close inspection reveals no evidence of an overstrike.

The Gowland brothers were the sons of Clement Gowland I (we'll call him I although his father, also Clement was a noted clock & watchmaker). Clement Gowland I entered his mark with NAO on the 19th August 1845, the address at entry was given as 178, High Street, Bishop Wearmouth, which is now a suberb of Sunderland. Like his sons there appears to be no submissions for assay at Newcastle. Clement (I) was married in 1828 to Jane Hay and was the brother-in-law to the well known Newcastle silversmith William Lister. He is thought to have retired around 1851-2 and died around 1859-60.

Following their fathers retirement the sons took over the business and entered into partnership, useing the same address as their father.
The 1861 census details George as married to Mary and having four children and two servants and the 1881 census shows that he had six children with all three sons described as 'Jeweller's assistants'. In 1867 George entered his mark at the London Assay Office.

So how can any of the Gowland's marks be found on silverware when there is no record of assay? The ledgers at Newcastle are complete at this period, so in theory the spoon shown above cannot exist, but of course it does and other items made by the Gowlands have been noted. The reason why it happened is surely just human nature, the Assaymasters at Newcastle during this period were Francis Sommerville then James Robson, neither were on a fixed salary and were dependant on the fees they received for marking and the percentage of the Duty that they were paid for collecting it. It was part of the Assaymaster's duties at Newcastle to keep the accounts and it appears that there was no check on the accounts with the exception of a comprasion with the assay ledger that was made by the Stamp Office, there were no daily reports and the Assaymaster made up the books quarterly.

The Assaymaster still has to eat during periods when little work is being assayed.

It is telling that in a report to Parliament of 1856 by no less than the Board of Inland Revenue's Inspector General of Stamps and Taxes of a visit he made in person to the Newcastle Assay Office he concluded that there was no supervision of the Assay Master and consequently no safeguard against irregularities nor any security for Stamp Duty payment. Put in an Auditors words this could easily be read as saying that the office ledgers were only as good as the Assay Master made them.
Accepting that the ledgers were, and continued to be, incomplete until the closure of the office in 1884 (there was seemingly no subsequent official visit to check them) the question arises as to why the Gowlands were never recorded in them as having paid anything. It does seem odd when the evidence of registering three marks outwardly shows over the years they were not trying to hide. Were they alone in this or did the ledgers totally fail to mention payment by some of the other registered tradesmen?
If the assay marks on the spoon are genuine the ledgers are clearly
incomplete. Whether the Gowlands knew anything about the omission from the ledgers and evasion of the Duty is open to question.
Mike
.
Top

An April, 1842 advertisement from William Gowland of Sunderland. William was in partnership with Clement (I) from c.1825 until c.1840. The partnership included their sister, Ann, for a period during the 1830's.

William's address of 8, High Street, Sunderland was the same address recorded for the earlier partnership.

As can be seen from the above advertisement, William's business was very short-lived.

If another firm were making and marking items for Gowland, is it possible that the actual maker is the name recorded in the recoords rather than Gowland since it is the maker who will have put the item in for assay and had it back for finishing?
Top

I've written this in a previous thread, but it really is important to understand hallmarking in provincial assay offices.

Page 73 of the 1856 Parliamentary Report.
James Williams (Bristol manufacturer) is being interviewed by the committee:

Are they in the habit at Exeter of allowing the plate to be marked with the initials of the dealers instead of the manufacturers?
JW - Yes.
Do you consider that an objectionable proceeding?
JW - Not at all.
But it is stated in a paper which is before the committee, that the practice of allowing plate to be so marked, affords means of evading one of the checks contemplated by the Act of Parliament, and is therefore very objectionable?
JW - We only use it in one case, and that is in the case of a very large consumer; his name is duly entered in the register kept at the hall, and there is no difficulty in ascertaining who the manufacturer was.

The Gowland family were all essentially watchmakers, so it would be no surprise if their flatware were made by a third party, especially by this date, as the factory made piece, had in most cases, superseded the handmade item. The responsibility however, would still have remained with the sponser of the items for assay and it must be the mark of the sponsor, that had been previously registered with the assay office, that the items would have been struck with prior to the submission. Thus is the case of this spoon, and others like it, it should have been recorded as a submission by 'George Gowland and Brother Goldsmith' regardless of whoever made or even physically took the spoon to the assay office. But, as Miles has noted, some of the provincial assay offices were lax on occasions with their interpretation of the rules and agphile's suggestion of the recording to the actual manufacturer rather than the sponsor may well be correct.

I can't help thinking, however, that I hope this was not the case. It would be very disappointing if many of the small spoonmakers, that we keenly research, were just the retailers of such pieces. While I accept that, at this date, it would have quite normal for the smaller silversmith to buy in flatware from a larger concern, I still much prefer the image of George Gowland sitting beside his brother in a darken workshop, beating out a spoon with bloodied fingers by candlelight.

I love your romantic vision but the spoon in question must have come from a workshop eqipped with the right die for the pattern on the handle and a press to use the die, implying a specialist spoonmaker in a fully equipped workshop. I think I would want to see evidence of a largeish output before tending to believe that a retailer sponsor was also a maker, and even then, as the evidence from Miles shows, manufacture could well have been outsourced.

That said, a retailer may well have had a workshop for repairs, engraving and perhaps also the making of some items not requiring too much specialised equipment, so we can still imagine a retailer getting his hands dirty, and even by candlelight, as we form our images of the past. And it is still possible to imagine retailer, maker and assayer colluding to do naughty things, or just careless record keeping

My previous post on the subject held the view that the Gowlands, although they didn't appear in the Newcastle assay records, may not have been complicit in a Duty dodge.

David (Agphile) has alluded to the possibility that the spoon was made and put to assay by another. If the Newcastle hallmarks are genuine (and no doubt has otherwise been expressed) we should be looking for a large manufacturer attached to that city's office or, as Miles (Grandmaa) suggests, the spoon might have been in a consignment bought in by a major maker who then sent these items for assay there. Reid & Sons is one such firm which comes to mind. They were using a rectangular punch with the initials DR registered around 1864 and the Gowlands could have bought the spoon in from that firm after assay and easily overstruck their own mark. As we have seen from other Forum pages jewellers were known to overstrike the marks of others.

Might this readily explain why the Gowland's had no work recorded in the Newcastle books?

The spoon shows no sign of the maker's mark being overstruck, I'm confident in my own mind that this was the mark under which the spoon was submitted for assay.

As for the maker, if it was of Newcastle manufacture, and I suspect it was as it is single struck, then there are only three candidates for the maker. Reid & Sons, as you previously mentioned, an elderly John Walton, and Thomas Sewell, who was continuing the business of his old Master, Thomas Watson.

I thought this could be an interesting image to add to this, all be it, old post. It shows marks from a 1854 Newcastle spoon, 2 years into Gowland Brothers working (or retailing) period. 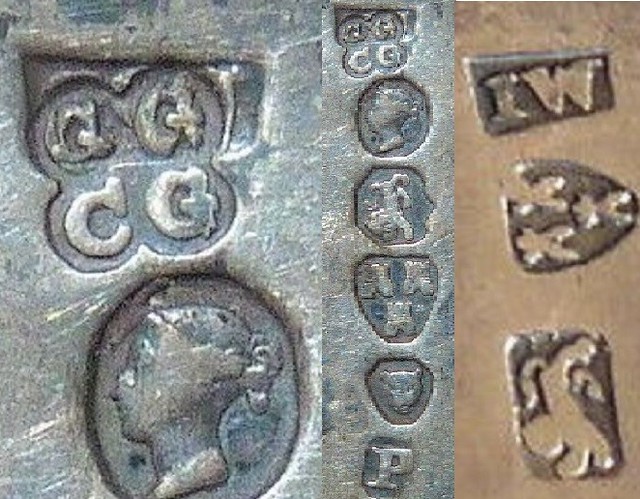 This is an obvious overstrike of another silversmith's mark. It is an earlier set of marks than the possible overstriking of a "Reids", "DR" mark, theorised before. I would think anybody who has an extra interest in Newcastle silver could by now have a good guess at whose mark was overstruck. I thought immediately "John Walton's" mark. I could imagine his "IW" under that "GC" part of the Gowland Brothers mark. John Walton, who was mentioned earlier, had his workshop at Painter Heugh and was only about 12 miles from Gowland Brother's Bishop Wearmouth, Sunderland base.

Geography
Painter Heugh, off Dean Street
Painter Heugh is an old lane of medieval Newcastle which used to connect the lower part of Dean Street with the higher parts of Pilgrim Street to the east. Its line is now broken by the multi-storey car park, the railway viaducts and the busy road approaches to the Tyne Bridge.
Top

Here is an old image I had on file of a Gowland-Walton overstrike from 1855: