Hello, surprisingly, I just bought myself a few more spoons. They came from an auction house that unlike many, had good hallmark images. The spoons were described as probably by "Thomas Watson" of Newcastle and I do not think many would disagree with that, even with the rubbed marks. The date letter is missing but we have the "cusped" duty mark that I think we now believe, was only used at Newcastle 1798-99, allowing for a few sporadic exceptions? 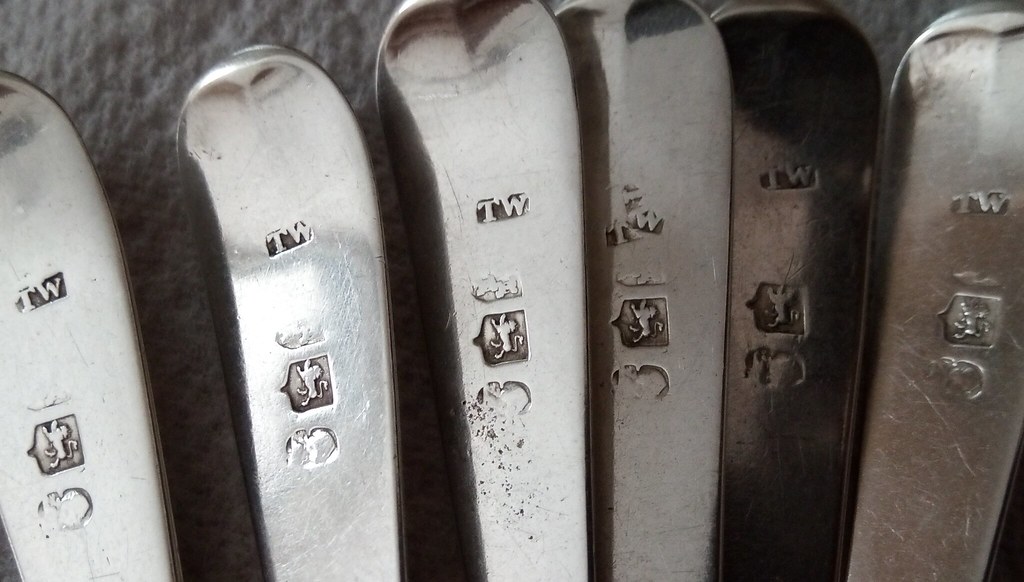 The spoons are about 14.5 cms long, each weighing around 13 grams and I assume teaspoons. What struck me about them was the lion silver standard mark that the spoons had been stamped with. They were not of the type of standard mark showing the lion stretched across a crisp rectangular cartouche. That is mark you like to see with Newcastle silver and with other provincial hallmarked items of the period. The base of the cartouches with my spoons seem to come to a definite downward point in the centre. My own spoon collection does not bulge with large numbers of pre 1800 Newcastle silver items for comparison. Is this a different punch from the usually used one or just the of result of being struck with a fresh unworn punch?

In Margaret Gill's excellent 'A Directory of Newcastle Goldsmiths' there is a record of the known punch-makers, unfortunately there is gap in the record between 1790, when the punches were locally manufactured by Beilby & Berwick, and 1837, when they were supplied by the London Company's engraver, John Smith. At this date the punch is likely to one of those supplied by Beilby & Berwick, and no doubt each punch would have differed and had the one in your examples broke early in its life, then few examples would likely be found.