Hello I was recently looking at my spoons and this led to me rechecking one of my “contentious” teaspoons. It challenged me to review its limited hallmarks. The photo of the marks on the teaspoon is hopefully shown below. 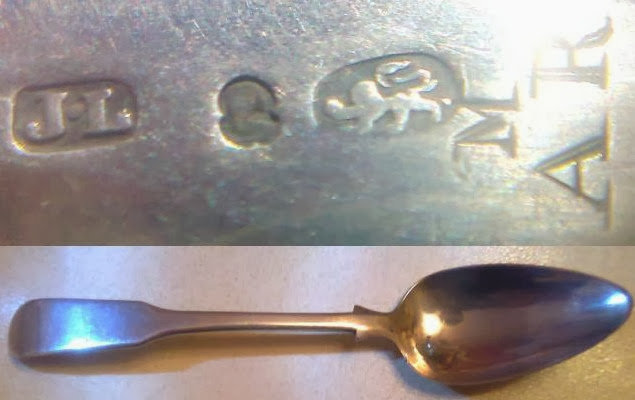 I now no longer believe this is a typical “guildless” London spoon. Currently I think it is a Birmingham spoon with no guild mark and the duty mark is of the “foliated” style used at the turn of the 18th/19th century by the Birmingham Guild and described in “Jacksons” pocket edition. If these thoughts are correct then this “J.L” mark could be another of the “John Lawrence” marks referred to on the “www.silvermakersmarks.co.uk” web site. I have no additional helpful ideas about the lion passant punch as it appears somewhat ovaloid and not obviously like those shown in the pocket edition.
Could members of the forum please review the hallmark photo for me and give their opinions. I would be delighted if my thoughts were correct (I’m getting knowledge) but equally happy to learn a bit more.
Yours
Fishless

That would be John Legg of Exeter.

Thank you Trev for your rapid and value added answer. I am disappointed I was wrong again. Perhaps I should go back to fishing. The upside is however that I seem to own an over 200year old Exeter spoon.
From my understanding of Miles Harrison’s Exeter cartouche article, this spoon cannot have been assayed before 1804 when the ovaloid lion passant was first used and was unlikely to have been produced after 1806 when the odd shaped duty mark should have been replaced? Could the rider to this be “John Legg” was working in Exeter as long as 5 years before his normally accepted dates of 1809 to 1814?
Reading around the cartouche article, I noted the photo in a 2008 post that you had uploaded of the marks on one of your Richard Ferris spoons. I thought its ovaloid lion passant with the broken tail was much like the lion on my spoon and possibly the spoons were of a very similar date. Anyway how amazing it is that with a few actions of your keypad you have given this “no fixed abode” spoon from the bottom of my box a home, a father and almost a date of birth.
Yours
Fishless
Top
Post Reply
3 posts • Page 1 of 1