Hi, this is a funny little that I believe is set with fake marks but I am not 100%. It does have a genuine hatchet mark for what it is worth. Any help is appreciated. 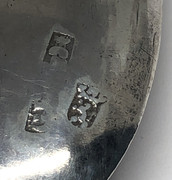 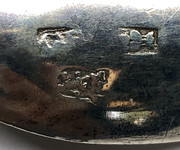 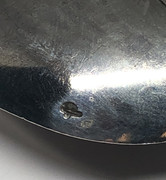 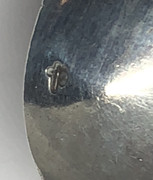 Hi, it does look like the city mark of Alkmaar, the castle tower, used in the 18th century. I am not 100% sure. The lion rampant, the provincial standard mark looks OK. There should be a year letter and maker's mark. I will study it a bit longer and get back to you.
For Alkmaar see:
viewtopic.php?f=5&t=32028#p80360

Thank you Peter, I think you are right. There is no date letter though nor any evidence there was one. The makers mark (sorry for the rough photos) is kinda worn. It looks to be either C or G followed by either an E or F or less likely a B or R.
Top

thank you again for your help! Despite how hard I looked at the marks I couldn't figure out what it was. I also now think the date letter might be that small blob underneath the tower. Did they combine the date letters with the town mark ever?
Top

Yes, Alkmaar did. However the latest literature available about Alkmaar mention it only for the second standard of silver. So called kleine keur. If it is a combined town and year letter mark and if only used for 2nd standard of silver 833/00 fineness . We would see this combined mark without the provincial lion rampant to indicate 1st standard or 934/000 fineness. However I do not rule out Alkmaar used a combined town mark /year letter on small silver items of 1st standard.

Hi, could you please be so kind to give the exact length of the spoon in cm and the exact weight in grams.
Thanks for your cooperation.

Of course, but it's at home and I am work. I'll bring with me to work tomorrow where my scales are. I work in the scrap precious metal industry so my scales are tested by the state and certified yearly. I bought this online though and not from a customer. Very very little old silver, let alone old European silver comes through my shop. I can tell you now that the seller's description has it at about 18.4 cm and the weight is 52.88 grams but I can double-check that for you tomorrow.
Also if there is ever anything I post on here and you would like to use the pictures for any reason I give you blanket permission to do so. I take all the pictures myself (thus the low quality) and own every item I post. You've been such an great help to me
Top

I double-checked and the spoon does measure 18.4cm but it weighs 55.2 grams
Top 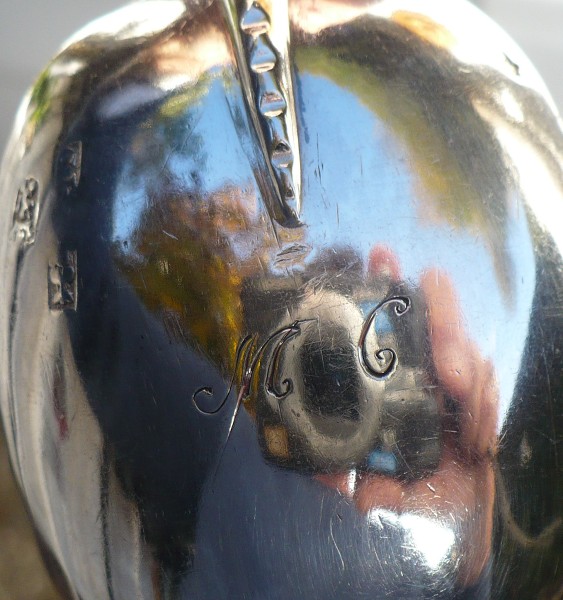 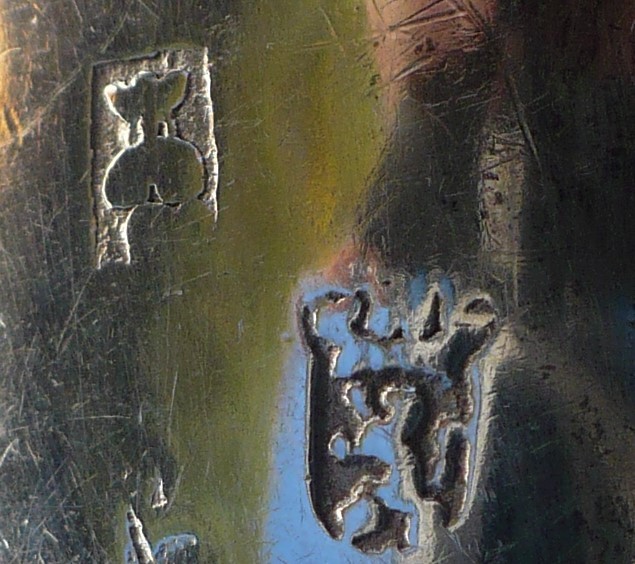 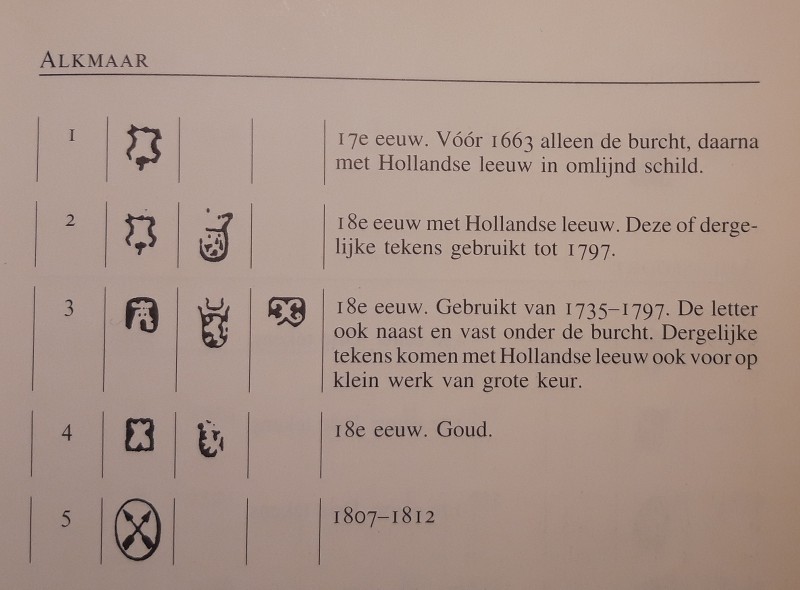 The spoon has a pear-shaped hand hammered bowl, inscription M C. The bowl is connected to the cast stem with a rat's tail. The stem type is braided. The stem’s finial; Love, a woman with children and a palm branch in this performance is meant Divine Love, expressed in caring and selflessness. Like a mother takes care of her children. The weight of the spoon is 55.2 grams, and length 18.4 cm or 3 gram / cm.
The Marks; a rectangular shield with castle tower with an M-shaped figure underneath, remnant of a year letter along with the Dutch lion. If we take the book L. B. Gans Gold and Silver Marks of Voet edition 1992 and we look at page 1 for Alkmaar. Then, next to a castle tower mark, we see the mark of the Dutch lion, which is an exact copy of the Dutch lion on the spoon, with an year letter next to it. NB. all three marks in the book are printed in the carbon black method. We read; 18th century. Used from 1735-1797. The year letter seen also next to and fixed under the castle. With the Dutch lion mark also occur on small works of 1st standard silver 934/000 fineness. The decorative spoon has the city hallmark of Alkmaar. The year letter under the castle tower could be the M of 1746.
Silver with the town mark of Alkmaar is rare. Much of the city silver from Alkmaar was lost due to wars and the occupation of the city. Melted into coins to pay the soldiers. Melted in the 19th century to make new silver objects that better suited the time spirit. Decorative spoons with 18th century hallmarks can be counterfeits. However, if we look in the red book by K. A Citroen False Silver marks in the Netherlands, there appear to be many and various fake town marks, but not for Alkmaar. Alkmaar's city hallmark is probably unknown to many because city silver from Alkmaar is rarely encountered. The combined city hallmark Alkmaar with year letter is not shown in Voet. 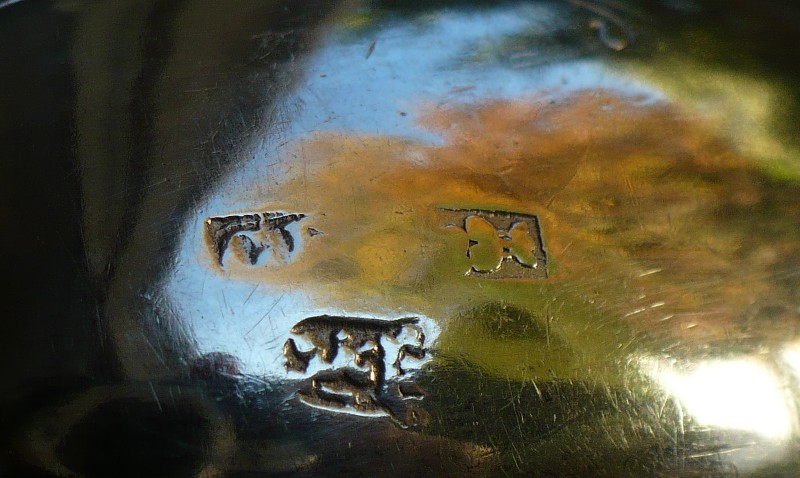 Godert van Fockenberg in Alkmaar is Godard van Fokkenberg in Utrecht.
He was baptized Dutch Reformed on June 21, 1719, in the Domkerk in
Utrecht. Godard is the son of the Utrecht silversmith Andries Hendrik van
Fokkenberg. Andries Hendrik van Fokkenberg was born in 1687 and died
on 25 May 1740 in Utrecht, registered silversmith in Utrecht 1705-1740
used master marks; letter A and letter F and AF and AHF. Godard's mother is
Margrieta van Stuijm.

On 15 December 1739, prenuptial agreements are drawn up between the minor Godard van Fokkenbergh, in the presence of father Andries Hendrik van Fokkenberg and mother Margrita van Stuijm and the honorable adult Pieternella van Wilborg, the future bride, in the presence of her father Cornelis van Wilborg. The groom's parents will pay the expenses related to his master's test for the silversmith's trade and the tools needed to do his job properly. Including a bed with complete accessories, being a free groom. The master smith title brought with it social obligations & demands: having sufficient means to set up your own "winkel" ( "shop" as it was called), or the married state. A master was expected to be married, unlike a bachelor.

The father of the bride, Cornelis van Wilborg promised to give the bride a sum of 500 guilders at the wedding, only compulsory if and when the future spouses, as it intends to move to Alkmaar, on top of her clothes and jewelry and in community of goods, with appointment as guardians of the surviving and consecutively the fathers.
On March 15, 1740, Godard married Pieternella van Wilborg(or (van) Wilburg (baptism date 24-02-1715, in Utrecht’s Catharijnekerk. Immediately afterwards Godard travels with his wife, and his two sisters Johanna Juliana and Kuenera (Cunera), together with his brother-in-law Willem van Wilborg and sister-in-law Elizabeth van Wilborg, to Alkmaar.
https://en.wikipedia.org/wiki/Alkmaar
Shortly thereafter Godard father Andries Hendrik dies on May 25 in Utrecht. The eldest son Samuel van Fockenberg (1714-> 1790) continues the Utrecht family business as a silversmith. Master mark SF.

Godard arrived in Alkmaar (Godert Fokkenbergh) on May 7, 1740 registered as a member of the blacksmith's guild in Alkmaar. Coming from outside the city of Alkmaar he paid double entrance fees for the guild, the sum of 50 guilders and 4 pennies. Probably the then 20-year-old Godert also performed his aptitude test in Alkmaar. Master mark GF.
During his life, Godert bought 15 properties in Alkmaar, some only for a short time, some of small size and value, but he started in the Veerestraat (Hofplein) in a building that he took over from his brother-in-law Wilborg. From 1747 Godert lived his life on the corner of the Schapensteeg or Magdalenenstraat (no1) and Houttil.
In 1741 he took Willem van Wilborg (brother of his wife we assume) under his wing as apprentice.
On December 7, 1743, Godert van Fockenbergh is mentioned in the "list of wardens" of the blacksmith's guild in Alkmaar. Godert becomes a assayer under the year letter K of 1744.
On August 14, 1743, his son named Cornelis Julianus van Fokkenbergh was baptized. Apprentice under his father, and on June 3, 1763, Cornelis Julianus is registered in the blacksmith's guild of Alkmaar and, as the son of a guild member, pays a quarter of the entry fee of 6 guilders and 6 pennies. Master mark FB in rectangular contour and F in contour of three-leaf clover. He works in his father's company and continues the company after his father's death.
Godert van Fokkenbergh and Pieternella (Petronella) Wilborg (Wilburg) have a total of 5 children; daughter Andrietta baptized in 1742, son Cornelis Julianus baptized in 1743, daughter Saartje baptized in 1746, daughter Johanna baptized in 1747 and daughter Goderina baptized in 1760.
June 1, 1756 Pieter de Keen becomes apprentice under Godert van Fokkenberg.
Willem Hoogland Jr, registered silversmith in Alkmaar 1772-1811 was married (2nd marriage) to a daughter of Godert van Fokkenbergh, called Johanna.
In 1774 the Alkmaar gold and silversmiths obtained their own gold & silver guild until then they were registered in the blacksmith's guild.
Govert, after the death of his first wife Pieternella in 1765, marries Trijntje Banga an Amsterdam widow in 1767. It is a short marriage Trijntje passed away on 11-04-1770.
Godert van Fokkenbergh died in 1771, after his burial on September 17, 1771, an estate division took place. His son Cornelis Julianus continues the company.

Family of Fokkenbergh silversmiths in Alkmaar;
In short Godert van Fockenbergh in 1740 silversmith master's mark GF in rectangular contour, died in 1771. His son was baptized on 14 August 1743; Cornelis Julianus van Fokkenbergh, apprentice under his father. On 3 June 1763, registered silversmith in Alkmaar and, as the son of a guild member, paid a quarter of the entry fee of 6 guilders and 6 nickels. Maker's mark FB in rectangular contour and F in contour of three-leafed clover, died March 24, 1807. The family business is continued after his death by his widow Geertruida Zeilman and his son Godert van Fockenbergh (Jr). Later the son of Godert (Jr) named Albert Kikkert van Fockenbergh also comes into the company together they carry the master mark FB under swan ?, in diamond-shaped contour. The company was sold to Alkmaar silversmith Jan Kleij Sr. in August 1821.