I bought this spoon as a fake because the maker's mark has been known to be faked, the rattail looked poorly cast and the crest on the back looked to me like Victorian-era tourist bate (windmills, wooden clogs, etc) typical on dutch fantasy pieces circa 1900 thereabouts. Now that I have the spoon and can examine more than just 3 blurry pictures I think it might actually be authentic. The rattail is the way it is from repair work as can be seen from the cracks on the front of the bowl, the marks are not cast and the bowl is hand hammered with genuine evidence of use. Now according to the OKS (Ottema Kingma Stichting) museum, the crest was possibly made for someone from the shoemaking guild. They have a couple of similar spoons with similar cartoonish crests. Was there a large shoe industry in Dokkum at one time that so many similar spoons would survive? The shield depicts a cow, a leather knife and a shoe. If anyone can shed some light on this I would appreciate your help but I am assuming Peter will most likely know. 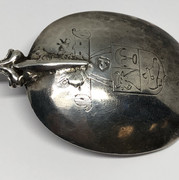 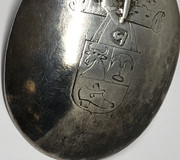 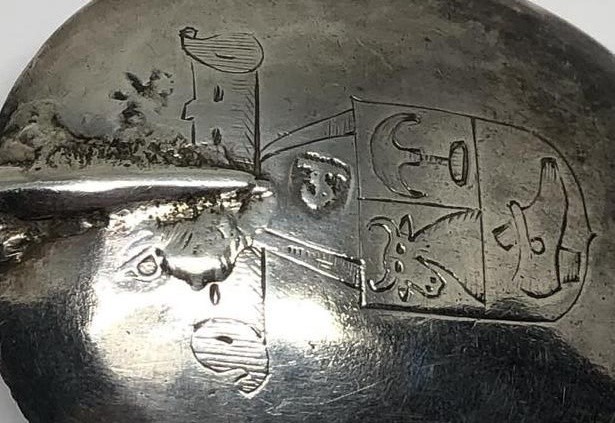 Interesting spoon and yes like you mentioned herewith a spoon with similar engravings; crest of the shoe-making guild see:
https://www.oks.nl/collection-detail/732no-04041
The town mark of Dokkum should be three stars under a crescent moon. See Dokkum: 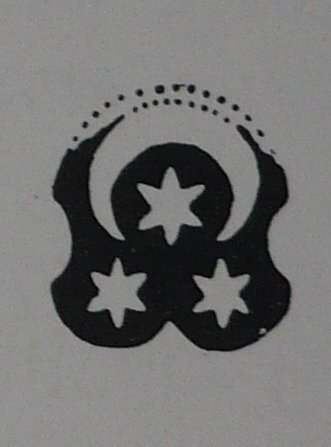 viewtopic.php?f=5&t=32028#p80360
The maker's mark TS conjoined in monogram could be for Thomas Hicht, Dokkum 1675-1719. Year letter P perhaps for 1687.
However, like you mentioned, the exact maker's mark has been encountered as a falsification. See; Citroen Valse Zilvermerken in Nederland #344, including fake Dokkum town marks # 551, 552, 553, and fake year letter P # 274.
NB.The book; Merken van Friesche Goud en Zilversmeden door Elias Voet Jr. (1932) page 233 reads;The Dokkum guild archive mentioned in 1686 that Thomas Higt(Hicht) born in 1649 for the shoe makers guild both spoons and other objects together weighing 296 Loodt ( 4440 gram, 1 loodt =15 gram) had assayed. The author Elias Voet draws the conclusion that the Shoe maker's lot has been (re-)assayed in 1686 and perhaps long after been made.
The question remains. Your spoon Fake or Fortune? I will let you know the verdict in due time.

The spoon gets more interesting by the minute. Does Voet say that Hicht assayed and marked old silver for the shoemakers guild? Why did the shoemakers guild have so much silver? Also if you check OKS collection they have spoon by hicht with the same date letter and it also has what looks like the same die break on the P (the line stretching from the foot of the letter to the tip of the bump) and also cracking in the bowl at the same place as mine. Perhaps there was something wrong with the alloy he was using that year? I cannot really make out the other marks on their spoon though.
https://www.oks.nl/collection-detail/759no-03986
I look forward to the final verdict of this spoon and thank you for your help so far.
Top

After consult with Mr. Jan Schipper of http://www.zilverstudie.nl/ Mr Jan Schipper kindly informed me.
The text of the 1932 edition of the Friese Voet (Merken van Friesche Goud en Zilversmeden door Elias Voet Jr. 1932 page 233). The text in question contains a number of factual inaccuracies. For example the statement about the "teekenen" ( assay) of Shoe maker's guild batch is incorrectly dated. It is not 1686, but 1687. To be precise, it is mentioned in the Guild's Craft book (Ambagtboek) dated August 19, 1687. The correct transcription reads:

or on 19th of August 1687 craftsman (silver smith) Hicht brought in for assay the Shoe maker's Guild batch of spoons and other items weighting two hundred ninety-six lood.

We think that this guild not only had shoemakers, but also other leather workers as makers of (horse) harness and saddles, etc. among its members. Regardless of the number of the guild's members, it appears to have been a fairly wealthy organization, given the amount of silver involved. At the end of the 17th century, a kilo of fine silver cost around 100 guilders, and that is not a small amount at that time.

Your spoon, we believe is no fake and in fact, most likely it is one of the spoons referred to in the text of the Ambagtboek of 19 August 1687. Two other specimens from 1687 are known to Mr. Schipper. One of these has the same design as your spoon. The other copy has a different type of lobe stem.
A nice thing to know as you already noticed is that the true Dokkum town marks for 1687 can be recognized because of a characteristic damage in the year letter P. All silver that we know of that year letter show the same damage in the form of a crack in the punch mark that runs from the center of the underside from the loop of the P to the bottom of the stick of the letter. The year letter P of your spoon also shows this characteristic damage.

Wow, thank you for all your help Peter, this is exciting news and I am more thrilled than ever to own this spoon.
Top

Amazing find :: Do you think the handle has been re-attached to the bowl? ::: I always love to see 17th century silver spoons thank you :::::
Top

It looks like it was 80% detached but not completely before someone crudely repaired it.
Top

Dear Legrandmogol, I can assure you that your spoon is genuine. I know the master's mark TS quite well, and this mark is without any doubt. There is no reason for fearing that it is a fake. I recognize the maker's mark as well as the hallmark from a brandy bowl by the same master. Best wishes, PDR
Top
Post Reply
8 posts • Page 1 of 1