Good morning
I have a pair of cast gilt figural spoons,I believe the style is Dutch but I'm not sure if they are of they are of the 18th Century period or a late 19th Century remake. Please could anyone assist to identify the maker?
Both spoons have the same marks. 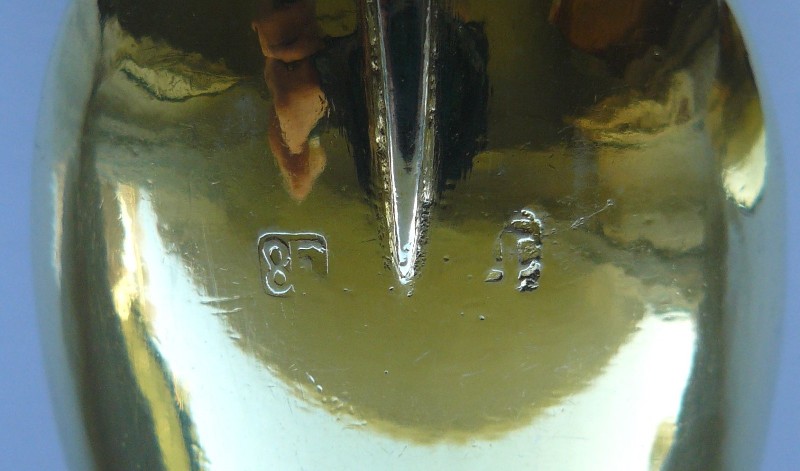 Indeed Dutch and with Dutch pseudo marks; E8 in a square shield with rounded corners, pseudo year letter based upon year letter town of Zutphen seen on silver spoons/beakers/cream bowls/purse frames. Silversmiths located in the province of Groningen used this pseudo mark. CL conjoined pseudo maker's mark and also used by silversmiths located in the province of Groningen. Your spoons, estimated guess, made around turn of 19th century or first quarter 20th century. Source; Valse Zilvermerken in Nederland K.A. Citroen

Individual spoons became plentiful in Holland in the 17th century and later. They were given as presents to mark births and marriages, but also death and special events. For each occasion, appropriate finials were chosen, with favorites including Plenty or Bounty (a female figure holding a bouquet and frond), Charity (with its family symbolism of mother and children), Hope (a female figure with an anchor), William and Mary (suggesting patriotism), and Apostles (chosen for a new child’s name). The finials were cast from molds which were used for years. Spoons fashioned in the towns of Friesland had a similar range of finials, but often had openwork stems frequently decorated with cherub heads. The shape of the bowls moved from fig shape to egg shape, the latter resembling the bowls of tablespoons.
"The real McCoy"
https://friesscheepvaartmuseum.nl/beeld ... 1000002564

Thank you so much for your comprehensive and insightful reply! It is interesting to read and helpful for pursuing further research avenues in future.