Hello,
I am trying to identify the origin and silver content - really any information I can on this repousse hot water urn. I have searched high and low and appreciate any information.
Thank you.
Victoria JUST A SHOT IN THE DARK... have you tried Hull Great Britain ?
Top

I can see you way of thinking, and although the Hull silversmiths used a similar 'three crowns' mark, this is definitely not their work. 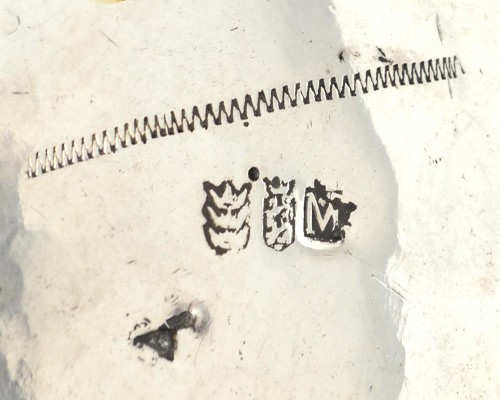 The marks suggest Dutch guild silver, town mark of Sneek, three superposed crowns and pretending to be for 2nd half 17th century, followed by the province mark of Friesland, two superposed lions in a crowned shield however a fake one; the shield too tall and slender and the lions look wrong. Followed by a fake year letter M, the contours of the shield are wrong. The unclear triangle mark could be a Dutch duty mark, the dolphin in a triangle for ungaranteed standard of fineness and silver objects of Dutch origin used 1893-1905, with an attached export key. For Dutch (hall)marks see: viewtopic.php?f=5&t=32028
The Dolphin mark.
The 2nd Dutch dolphin mark in a triangle; the 1893 duty mark for new unguaranteed objects of national origin. This mark was used on all new silver objects below legal standard of fineness, those with non-precious metal additions, and on new heavily gold or silver plated objects, as long as the average precious metal content after melting with the base metal was at least 250/1000. It was also struck on rejected objects which had been submitted at lowest standard of fineness (2nd standard). In that case the maker had to choose between destruction or unguaranteed marking. This mark was sometimes also mistakenly used on old and foreign objects.2nd Dolphin mark used from 1893-1905 and valid from 1893 till 1953.
Export key: mark to indicate 2/3 duty restitution upon export valid 1853 till 1953.

In short we are looking at a Dutch hot water urn, made for export, turn of the 19th century, with fake guild (hall)marks and the maker's mark could be somewhere hidden or missing. The urn appears to be a clever piece of craftsmanship but not that old the marks “suggest” it to be. Silver content below 2nd Dutch standard or below minimum 833/1000 or lower than 83.3% pure silver.

Hello,
Many thanks for the suggestions and very in depth information.
I truly appreciate your expertise and wonderful explanation of the hallmarks on this item.
I have a passion for researching and discovering the origin on items and this one stumped me!
Thank you!
Victoria
Top
Post Reply
5 posts • Page 1 of 1