by tux
Strange set, only double maker, help wanted
Somehow this spoon and fork only have a double strike of the maker mark: HNM or WNH?
They came with other silverware from Holland, so most likely its origin.
With the double maker mark there is only 1810 and KJ.
Ive read that silver-plating was invented 1805 but used on bigger scale some 30 years later.
If someone can clear me up, oel? :) that would be great, also on the time when silver-plating was used industrial.
Thanks all! 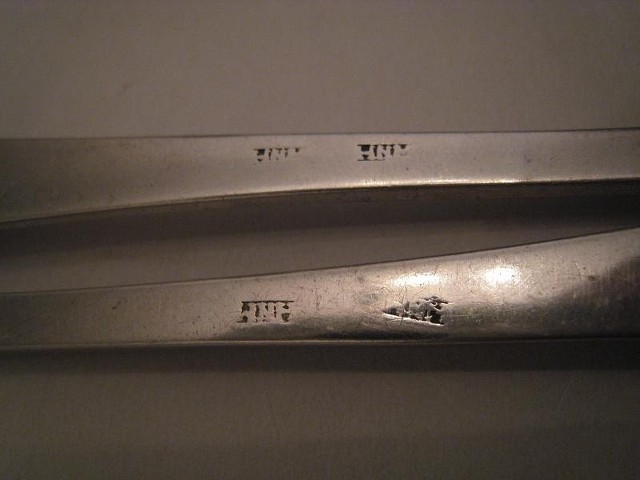 Yes, I believe it to be silver, and perhaps Kingdom of Holland 1806-1810, silver; 2nd standard around 833/1000, the maker’s mark could read HNM in a rectangle for: Hendrik Nijman, registered in the city of Kampen, from 1795-1811.
It needs further investigation, not home at the moment, reply later this week.

PS:
I noticed you have removed your images from previous question. For the benefit of the forum members & prowlers could you please remain your images as long as possible!
viewtopic.php?f=24&t=32406&p=81677#p81677

by tux
Like always your right. I just read that this mark must be by Hendrik NijMan, 1797-1815 accoarding to my source. It also explains the missing assay/year/silver level as silver/goldsmiths from Kampen only had to go to the assay office in Zwolle from 1812. Thanks again :)

In 1795 The Dutch Republic or the Republic of the Seven United Netherlands (The Low Countries) are conquered and occupied by the French armies and are annexed by the French Republic.
In 1795 Proclamation of the Batavian Republic 1795-1806, a French satellite state and the hallmarks of the French Republic (1795-1804) were introduced. In 1806 the self-crowned emperor Napoleon Bonaparte forces the Batavian Republic to accept his brother Louis as King of Holland, Kingdom of Holland 1806-1810. In 1810 Napoleon unhappy with his brother Louis, Napoleon decides to annex the Kingdom of Holland and to become part of the so called French Empire (1804-1815). In 1813 Napoleons defeat at Leipzig and November 1813 partly liberation of the Low Countries followed by a few years of turmoil and Napoleons final defeat at Waterloo in 1815. In 1798 the Dutch guilds which existed for ages, were declared abolished but temporarily remain in existence as destroyed guilds until 1807 with the total dismantling of the guilds, and the introduction of office marks and uniform date letter.
Kampen, the city guild mark; 3 castle towers under crown, and under French occupation Kampen assay office mark; triangle in oval shield used 1807-1812, Kingdom of the Netherlands; in 1814 the silver smiths of Kampen had to use the assay office in the city of Zwolle. Distance between Kampen-Zwolle around 13 km.

Hendrik Nijman silver smith in Kampen, born in Zwolle 1774 and died?
Officially the fork and knife should have been hallmarked however in time of turmoil & uncertainties the rules are not always upheld, who knows what has happened and what made Hendrik Nijman use his maker’s mark twice?
I believe Hendrik used the maker’s mark; HNM, till 1812. In 1812 Hendrik registered two new maker’s marks in a lozenge, according the French rules, and used these till 1818; he registered a total of 10 maker’s marks and active until around 1853.
Congrats Tux, nice finds.

by tux
Thanks for the nice background information Oel, much appreciated

By order of the authorities of the French occupying forces in the Netherlands, the professional guilds in the Batavian Republic are demolished 1798. It is not clear if the city of Kampen had its own assay office during this transit period. Eight years later Emperor Napoleon introduced the Kingdom of Holland with his Louis as the new King of Holland. Immediately afterwards King Louis introduced new assay rules based upon the simplified French assay rules and in Kampen, it turned out, there were just enough silversmiths working to opt for a local assay office; a minimum of 4 to 5 persons of which one an independent silversmith or cashier. In the autumn of 1807 Kampen opened his new assay office. The assay office mark; a triangle placed in a standing oval. This situation lasted until 1812 when the Netherlands (Kingdom of Holland) is incorporated into the French Empire.

by tux
Ok cool, they went from strange/boring with only twoo maker marks to interesting :)
All times are UTC-04:00
Page 1 of 1
Powered by phpBB® Forum Software © phpBB Limited
https://www.phpbb.com/