I have found this cup that has led me to research Henry Littledale. If you can add to this research please do so. Thank you

The cup is fully hallmarked for London 1938 with makers mark H.A.P.L. This mark is for Henry Ambrose Pudney Littledale. The base of the cup is augmented with extremely high quality cloisonné green enamel.

Major H.A.P Littledale (1881 – 1966), as he apparently liked to be known, was a minor aristocrat and officer in the army from 1901 to around 1925. An unlikely start for a jeweller, silversmith, enamellist and inventor. At some time in around the 1920’s or early 1930’s he takes up metalworking and by 1935 is an active member of the later arts and crafts movement. His work was displayed at the Royal Birmingham Society of Artists Crafts Exhibition 1935 and he was both a Craft Member and Exhibitor at the 1938 Arts and Crafts Exhibition Society. He registered his mark at the London assay office in 1937.

His work is extremely rare – I can find no other surviving examples, though I am sure they must exist. His importance does not stem from his work as such, but from his development and patent in 1933 of a new technique for hard soldering that allowed refined granulation techniques in silver and gold (patent number 415181, 23rd March, 1933). .

Such was the significance of this development that he gave a series of lectures at Goldsmiths Hall (possibly also the Art Workers Guild) on his technique entitled “The scientific and technical factors of production in gold and silverwork”. He also seems to have given a lecture at around this time with the title “A new process of hard soldering and its possible connections with the methods used by the ancient Greeks and Etruscans”. We know from surviving notes at Goldsmiths Hall Library that included in the audience were Elizabeth Treskow and Johann Michael Wilm, famous modernist jewellers from Germany, who themselves are credited with reviving the ancient neoclassial techniques. Littledale’s co-speaker at the lectures was HG Murphy.

What I know of Littledale is quite limited but he was heavily featured in a 1936 article in the “Industrial Arts” Journal (Volume 1, N0 2, pages 122-128). An extract from this article is shown below:

“That new opportunities do await the jewellery trade has been proved by Mr H Littledale who has succeeded in rediscovering the secret of fine grain work which has been lost for nearly 2000 years……Castellani in the early 19th century and later Guiliani experimented with the idea and some of the latter’s work, now in the Victorian and Albert Museum, shows a resemblance to some of the ancient work, but the secret, so far, as he had penetrated it, died with him.

….The secret depends on chemical not mechanical methods and has now been rediscovered and patented by Mr Littledale.”

The article goes onto describe the method and states that it also allows for refined cloisonné enamel work – as exemplified by this bowl.

The bowl is in near mint condition and a very good gauge of silver. All the seams have applied delicate wirework. It has been made in two parts with the base screwed into the bowl stem – see images. You can also see the blue counter enamel in the foot. It is a masterpiece of workmanship and a great representation of later British arts and crafts modernist interwar silver work. 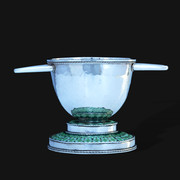 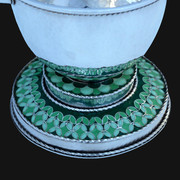 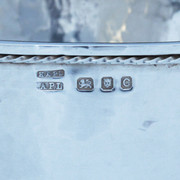 Should it be of help, here is the link to the European Patent Office website, regarding Henry Littledale's patent 'Improvements in Hard Soldering Mixtures and Hard Soldering Processes':