The marks on this spoon have me stumped (which is honestly why I bought it). It appears on close examination to be two eagles or birds with outspread wings. On the other side is a Cursive L in a rectangle with clipped corners. It appears Scandanavian to me but it could be from a Baltic country. It is also made in a primitive 17th century way but this style of spoon is most likely 18th century. Any help will be greatly appreciated. 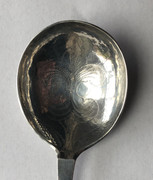 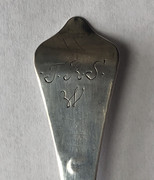 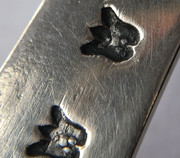 This is no way Scandinavian. I dont know where we can put this. But:

The Shaft dog nose is in my oppinion early 1700 hundreds The laf - rest of spoon is in my oppinion 1600 dreds.
Therefor we have an older style (laf) paired with the newer shaft. That calls for a very traditional smith.
The zig zag stripe I have never seen on danish silver. The danish (and norwegian) test was using a set of needles in various lod. So you compair with the coulor.
I think the zig zag has been used in sweden, but very rarely.
Sweden - the use of year, place, maker, kattfoot - was mandatory - and they followed that pratice.
I rool out scandinavian origin.

The use of dobble hallmark is tradition on provinsial silver in Denmark.
But also in Germany - where the zig zag line is very common.

The combinationlaf and shaft - i would say a tradition, not following the latest fashion.

I have looked for the L. Two Danish makers uset an L looking a bit like this L. One was in Sønderjylland. (germany from 1864 to 1920) These 2 L in my book are both to late for this spoon. My idea was if they had been inspired. The cartush on both are absolutely different.

My best - as you already have mentioned yourself, will be Baltic origin. Or German.
Top

Thank you for your input. I do think this one may remain a mystery sadly.
Top
Post Reply
3 posts • Page 1 of 1