I have failed to ID this spoon I bought at an internet auction some time ago. It has three hallmarks, from the left the makers mark, clearly saying "S HAGBERG", a name that is very possibly Scandinavian. The second hallmark is probably a city or province, a "U under a crown". It is very similar to the Swedish town of Ulricehamn, but the rest of the hallmarks don't fit. No Hagberg was active there and the spoon is missing the three crown hallmark and a date mark which is mandatory on Swedish objects. Last hallmark is possibly "71". So what do I have?

It seems an S.Hagberg existed as there’s other work by him, this photo is from a cream jug. So far I can’t find anything more but still looking. 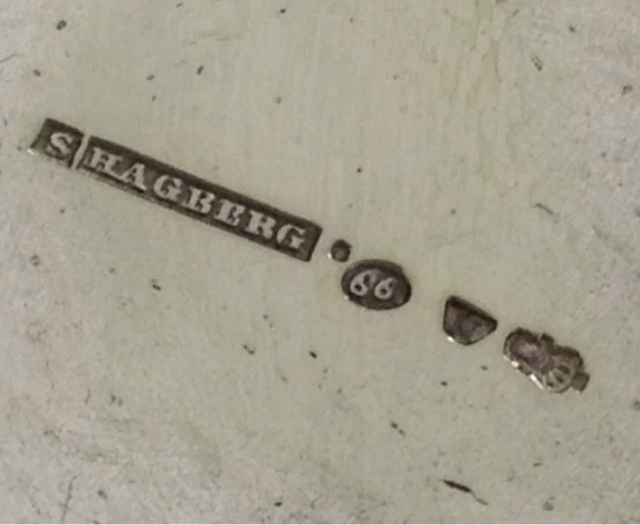 Could it be Geman? The crown above the u is so distinctive that an id should not be that difficult. Now that we got two objects maybe some one will recognise it?.
Top

From my knowledge they would fit if they were Swedish 18th century marks (1771 & 1766 for my photo). Ulricehamn would seem to be correct but the marks seem much later?

Needs somebody who’s more familiar with Swedish marks, hopefully they will will be able to help more.
Top

It looks very much as Ulrikehamn, but there are a few problems here. The cat's paw is missing and there is no known " HAGBERG" in Ulrikehamn and not either elsewhere in Sweden. Moreover, there are other marks on the spoon not matching with Swedish silver marks. The spoon could be made in Ulrikehamn but in that case it is not silver or less than 830/1000. Therefore the needed marks are missing.
Top

This is the Jug from which I posted the marks earlier. It was sold online a while back. 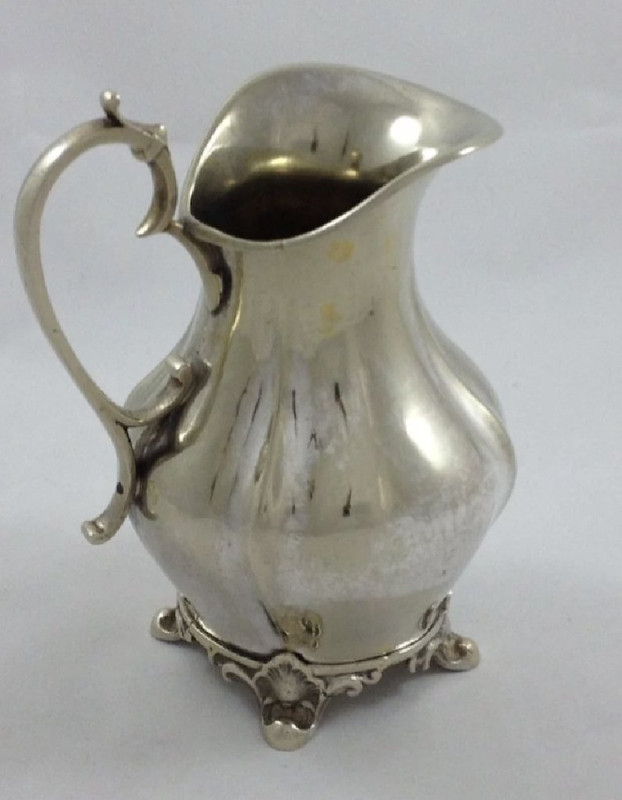 I found the old jugauction and read that they thougt it was from Finland. After som more reserch I tink that may very well be the case. It is quite possible that the spoon (and jug) is from Finland after it became a part of the Russian empire 1809. I haven´t got any good books about silver hallmarks from Finland but I am hoping someone on this forum has.
Top

I can’t see these as Finnish marks and I’ve checked and cannot find a Hagberg in Finnish references.
Qrt.S who answered above is extremely knowledgeable with Finnish marks so he would have said if he thought they were too.

I’m almost feeling suspicious about these marks as they just don’t add up but maybe there’s an answer for them somewhere.

It’s the kind of spoon I like though! Something that gets you thinking and researching.
Top

The reason that I am thinking Finland post Swedish-Russian war 1808-1809 is the oval stamp with a number. It corresponds nicely to the style they used to stamp the fitness. If this is a correct theory this will mean 71 zolotnik, not a common fitness but not unheard of . That may explain the lack of the official crown hallmark of Finland because the lowest silver content was supposed to be higher. Look at this page and you will se similar oval hallmarks with the fitness similar to the spoon and jug, albeit with different numbers. http://www.silvercollection.it/DICTIONA ... NLAND.html
Top

Thank you mk209. Yes, I would have said it if the spoons was from Finland. I confirm, it is under no circumstances of Finnish origin. "Thinking" it being from Finland proves nothing. As already mentioned the spoon is either plated or made of too low silver fineness, but where ???? I "think" it might be made in Sweden.
Top

Going to throw my two cents in. First: both pieces look decidedly mid-19th century to me. If the digits are 71 and 66, then they might well be dates: 1871 and 1866. Second: the name suggests Scandinavia, and the the only Scandinavian countries at the time which didn't have strict silver marking regulations were Norway and Iceland; I think you can exclude Sweden, Finland and Denmark as possibilities. The surname and paucity of makers in Iceland would rule it out, too (to me, anyway), and that leaves Norway. The last two digits of the year are not at all uncommon on Norwegian silver in the mid-19th century, and Hagberg is a not uncommon Norwegian name. If the crowned "U" is some sort of city mark - which it may or may not be - that would narrow down the search considerably, since there aren't that many Norwegian cities beginning with U. I tried to find regional Norwegian town directories online from those years but had no luck. But my money's on Norway, and that's where I'd look.
Top

I did check the Norwegian books but nothing there also.
Top

Yes; so did I. My point is that I think we can assume this is an unrecorded - or at the very least not well-recorded - mark.
Top

I did too, and found nothing. I believe it is possibly German silver/plated. Haven't found any trace of any town in Norway having a town mark like that. In addition, the town mark makes me believe it is not from Norway at all (A bönhase from Ulricehamn in Sweden?).
Top

half moon and crowne? and not U
Top

The style of spoon is exactly the same as some of my German spoons from the late 19th early 20th century too.
Top

@Hose
The law of the German half moon and crown was implemented in 1884. This spoon is from an earlier period. Before that German marks can be anything. I didn't say it is German, it was a thought only. The U could be a German town mark....?
Top

Is that another mark on the top right back of the spoon? Dots around another mark? Or is it just uncleaned?
Top

Qrt.S wrote:@Hose
The law of the German half moon and crown was implemented in 1884. This spoon is from an earlier period.

Sure the type is before --- but it could also be after. They did not produce all at one year, so the manufacture could also be as late as 19XX
Top
Post Reply
19 posts • Page 1 of 1