Thanks Peter, I did not expect these spoons to stir such critical (in positive sense of the word) discussion. Keep me updated if you learn anything. Thank you again.

The National Control Mark(triple Crowns-Cat's Paw) was stamped by Swedish state controlled regional/town assay offices only.(1)
The registered silversmith had to stamp his personal and self made maker's mark or identification mark, town mark (identifies town of origin of a domestic silversmith), and the date letter before offering his work to the assay office for final assay. With those three marks; maker's mark, town mark and date letter the silversmith guaranteed the object to be made of legal minimum fineness.The date letters and town mark were made by the various silversmiths and/ or their town guilds and this explains the differences seen in appearance of the same year letter.The mandatory National Control Mark stamped by the Swedish National Assay Authorities after final assay.

In 1689 first date letter system introduced by the Stockholm(1) Mint & Assay authorities. Date letters were implemented throughout the Swedish Kingdom/Empire in 1759, identical and uniform to the Stockholm date letter sequence. The date letter indicates the assay year and records were kept about silversmith and which town assay authority/assayer was on duty. The National Control Mark, (triple crown-Cat's Paw), hallmark to indicate minimum fineness of 830 and stamped by the Swedish state assay authorities on all domestically assayed items. 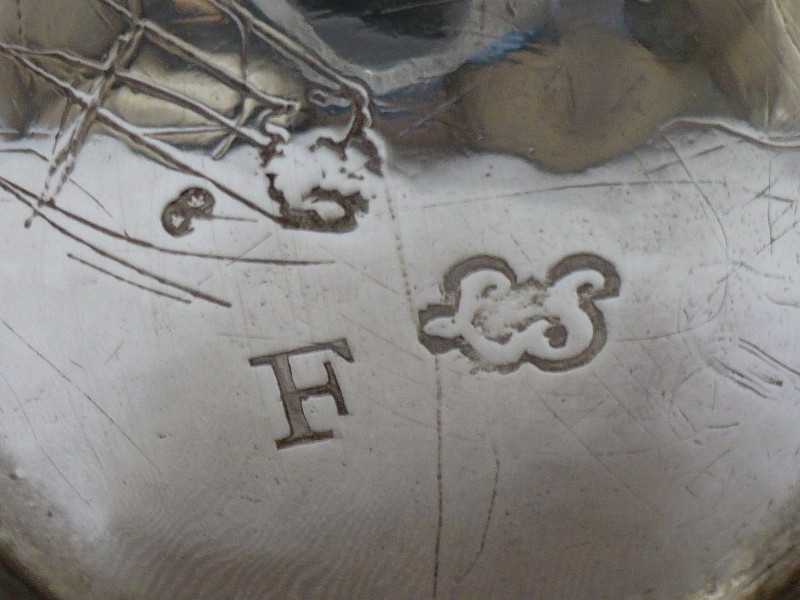 The mid to late 19th century was economically difficult for Sweden. In 1860 new town mark or Swedish Town of Origin marks were introduced. The core image of the new town mark is represented by the first letter of that town or city, except Stockholm continued the use of the head of St. Erik. The new town mark identified the origin of a domestic silversmith. The year letter to indicate the year of assay, the National Control Mark (triple crown-Cat's Paw) guaranteed minimum 830 fineness stamped at the designated Swedish state assay offices.
In 1912, modern hallmarking rules were introduced with the complete revision of the town marks and implemented in January 1st 1913. The hallmarks; maker's mark, National Control Mark(triple Crowns-Cat's Paw), Metal mark (S for silver, minimum 830 in a hexagonal frame shape), town mark, and date letter that identifies the year of assay.

Hallmarking in Sweden was compulsory until 1988, and always included the National Control Mark of the triple crowns. Except Gold below 1 gram and Silver below ? gram (2)

Today all hallmarked items, whether assayed before or after 1988, use a series of detailed sequential marks. These five or six hallmarks, normally stamped in a group or linear sequence, provide all the pertinent information needed to properly identify the precious metal, the maker, location, and date when the item was hallmarked. Since 1988, manufacturers have had the option of self-marking their items with their sponsor's mark and the fineness stamp, or sending them to be assayed and hallmarked by a privately operated assay office that has been accredited by SWEDAC. Swedish gold/silversmiths, manufacturers, and importers must have their identification mark approved and registered by SWEDAC, the Swedish Board for Accreditation and Conformity assessment

(1)
In the course of the 16th century, the town marks are implemented with the local coat of arms. Marc Rosenberg calls the town mark a "Beschauzeichen" = hallmark up till 1860.
In 1689 the year letters were introduced by the Swedish Mint Master Antoni Grill for Stockholm, which were subsequently introduced into a number of other cities, and were prescribed throughout the Swedish Kingdom/Empire by the decree of the May 29, 1758. Implemented in 1759, identical and uniform to the Stockholm date letter sequence.
In 1752 the Swedish state took control of precious metal minimum standard, The State standard mark with the Swedish Imperial crest, the three crowns in a three-pass, was introduced. Source Marc Rosenberg Band IV/Ausland Schweden.

Below 10 gram perhaps allowed to be traded without National Control Mark, to save stamp fees. It could be because we have two different caviar spoons; one 7,5 gram and one 9,1 gram, with 2 different responsibility marks/maker's marks Gustaf Möllenborg and Johan Petter Grönwall, both silversmith's town of origin to be Stockholm with different date letters X3=1828 and Q3=1822. Two traceable and known silversmiths stamped their marks and herewith guaranty minimum fineness 830/000
After forwarding the images of the caviar spoons to SWEDAC I received the following feedback.

We think, like You, that the fact that they have
(bothered) to punch the maker´s mark and the year letters indicate that
the spoons have been assayed. Yes below 10 gram, that could be part of the explanation.
Not easy to know why the Cat´s paw is missing.

Thank you, Peter, for the update. I am still waiting for the test kit to arrive.

All the best, Alex
Top

Just to close this discussion - base metal for both spoons is silver.