The shown stamps of the Gohram (Gokhran ?) collection are an insult to me.

Do not get insulted,ask Moscow University to be awarded a honorary PhD.
Don't you think it's a bit arrogant to challenge not an ordinary book or publication but a PhD dissertation ?
Besides,a couple of years ago you accepted Mrs Voldaeva^s marks highlighted in yellow as genuine but your name was Zolotnik at the time.And you thanked for that, by the way.Had no idea split personality can be so serious.
Meaning,you are not to be taken seriously.

Sazikov, Pavel Fedorovich, merchant of the 3rd guild, company founder. His workshop is known from 1793-1810. In 1810 he built the factory for the production of various kinds of silverware at Moscow. In 1842 he founded a branch in Petersburg. His son, Ignaty Pavlovich, continued the work in Moscow and founded a magazine in Petersburg. After his death, the sons Pawel and Sergei continued the company (until 1879), Valentin Ignatyevich took over the business in Petersburg (1856-1882). The company was a court supplier since 1846.
This is the official version in the textbooks!

How about the "cauliflower" court supplier eagle? The lean horse of St. Georg? The crooked punches and numbers? The full name Sazikov and as an extra the CC? You are really an expert. I doubt that you have ever seen real Sazikov silver!
Must be Sazikov quality!
This discussions are senseless and I better stop.
Top

AG2012 wrote:Do not get insulted,ask Moscow University to be awarded a honorary PhD.
Don't you think it's a bit arrogant to challenge not an ordinary book or publication but a PhD dissertation ?
Besides,a couple of years ago you accepted Mrs Voldaeva^s marks highlighted in yellow as genuine but your name was Zolotnik at the time.And you thanked for that, by the way.Had no idea split personality can be so serious.
Meaning,you are not to be taken seriously.

Ever heared of VroniPlag Wiki? Maybe something like that is coming to Russia one day?

Blind enthusiasm quickly vanishes when you deal with a thing instead of blindly accepting it! The shown marks are at a closer look really insulting!

I'm happy for you that you can accept everything without questioning it.
Top

I will try to collect more information about the Sazikov Sons history in Moscow and St. Petersburg following the Master Sazikov's death in 1868 ::

That salt spoon is really amazing, the proportions are perfect and the gilding is very precise, even the humble salt spoon is elevated into a work of art :
Top

Goldstein wrote:This is the official version in the textbooks!

??? Official? It is Postnikova's version. Different sources gives different information.
Another version is: Pavel Fyodorovich turned his workshop into a factory in 1812. Sazikov became court supplier in 1837. Khlebnikov bought the company in 1887. Valentin was born 1860. Sergei died in 1879.....etc. There is no "official version" but differing ones. Hopefully AG2012 will find out more...
Top

Unfortunately I have to disappoint your stereotypical and preconceived opinions! This data is from a special Sazikov book you have never heard of with certainty - what your answers show again and again. 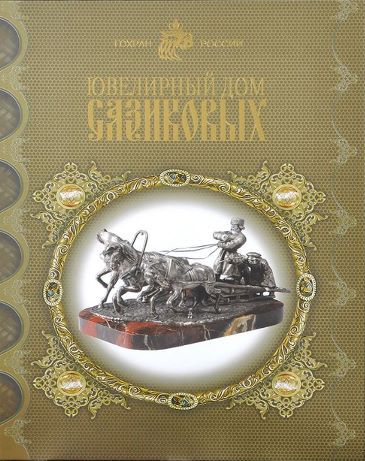 Hahhaa, I have the book. You never learn, do you. Your arrogance and impoliteness continue.

Goldstein wrote:Actually, I do not want to participate in this forum

Why do you?
Top

Does the book concentrate on the Master Sazikov only? How much of the book discusses the 2 Sazikov Sons?
Top

Ahaa, Goldstein's answer tells us that he doesn't have the book. The book is about the history of the Sazikov family and their factorie's with pictures.
Top

Qrt.S wrote:Ahaa, Goldstein's answer tells us that he doesn't have the book. The book is about the history of the Sazikov family and their factorie's with pictures.

It covers the small statuary works depicting the Russian national topics in depth that brought large-scale fame to the Sazikov firm - much more than the cutlery. His travels abroad, where he studied the aspects of precious metal products’ manufacturing. Having headed the company, I. Sazikov not only introduced the labour specialization for the workers at the factory, that effected positively the quality and quantity of manufectured products, but was among the pioneers who organized a special department for studying various jewellery qualifications for 80 persons in Russia as well.
He bought modern equipment and actively implemented Western technologies. He was the first in Russia to acquire a guilloche machine that was delivered from France in 1843. Ivan Sazikov invited famous sculptors and painters for the participation in his projects and creation of new models. Ivan Vitali, Peter von Clodt and Fedor Solntsev were among them.  Etc, etc.

Your behavior is just embarrassing and you are an impostor who sells the knowledge of others as his own.

I go my way - you can finally spread unchallenged your nonsense .....

I was wondering how the Master Sazikov gained all the knowledge necessary to implement his statuary works, I am always thinking "how did Sazikov learn to do all this?" when looking at his objects, I will keep looking for helpful family Sazikov-related material to add to this thread ::
Top

@ Qrt.S
For some reason after many years Annikki Tähti crossed my mind and I realized she passed away 2 years ago.
Do you happen to know if Monrepos park (Muistatko Monrepos'n) is a real place or just an imaginary and timeless park ?
How to pronounce ä in Tähti ?
Thank you.Have a nice evening.
Top

The letter ä in Tähti is pronounced like ae/æ. Tähti is the Finnish world for star. The tune Muistatkos Monrepos (Do you remember Monrepos) was composed by Erik Lindström in 1955. Listen to it, click on the link below.

Have a nice evening you too while listening to Annikki
Top

That was actually from The Man Without a Past, one of the best movies ever.
Regards
Top