I have this Russian Silver-Gilt & Niello Champagne Flute which I can't identify the marks any help would be welcome. 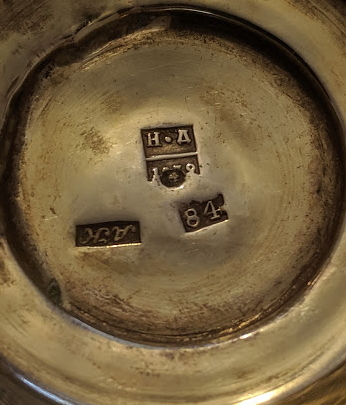 PL 2198, 2199 - unknown maker. Who is Kolotoschin? Where did you get information about him?
There were several makers with initials AK at that time in Moscow. For example why not Alexey
Kalashnikov (No. 1810 in Ivanov’s book) or Alexey Klemin (No. 1966 in Ivanov’s book) and so on?

Hi,
Not in Skurlov either.
How is his name spelled in Russian ?
Regards
Top

He is mentioned in Ярославль (Yaroslav)

PL 3816 and 3817
But there is no НД assayer in Yaroslavl.
Besides, is there town mark in champagne flutes posted here (it is plural, i.e. flutes, must be town mark in at least one).
Regards
Top

as you may know I am a collector of Russian silver and have the same literature as everybody. In addition, I have connections / exchange of ideas with other, international collectors - including many Russians. From this sources came the name of Kolotoschin - a often found niello spoon maker from Moscow with his striking initial letters.
It is not enough to list all silversmiths with the first letters AK - no matter where they come from - you need an original piece to compare both the quality and the actual hallmark. But you know it all yourself - without a picture of the respective hallmark, an assignment of the name is almost impossible.
The object shown carries a Moscow assaymaster, the data match and the manufacturer's stamp is known. About the name may still lack 100% agreement - there are the super experts who know everything better asked for clear answers. I have expressed my opinion and shown numerous examples (objects). Now I am waiting for a constructive brainstorming - not a senseless enumeration of AKs from all over Russia - it is about Moscow - and we have a photo and my hypothesis with several objects.
I expect constructive, plausible suggestions!
Here some more examples....

There is no controversy here:

2.I have no intention to contradict Goldstein and and the items he shows.They are made by an unknown maker in Moscow whose initials are matching Moscow town mark and the assayer at the time.PL 2198, 2199
There seems to be no problem here.
Regards
Top

I'm just as curious as you who it could be. 2 letters are simply not enough - you need a comparison mark (soothmark or photo). Everything else is not very serious and leads in the wrong direction. Skurlov and Ivanov are not alway helpful.

Goldstein, can you show examples of similar maker's marks AK with the Yaroslavl assay mark? If not, further discussion doesn't make any sense.

I think I made it clear that I have no source - only the "friendly note" of a collector colleague from Russia. If you know who the maker is - do not hesitate to enlighten me. He is well known among collectors - many beautyful niello spoons etc. exist. PL mention him - but have no name.
Collectors in Russia have often better sources and access to archives I do not have ....

Not sure if this could help to the discussion but here is the spoon of the same (I believe) maker.
1845, Moscow 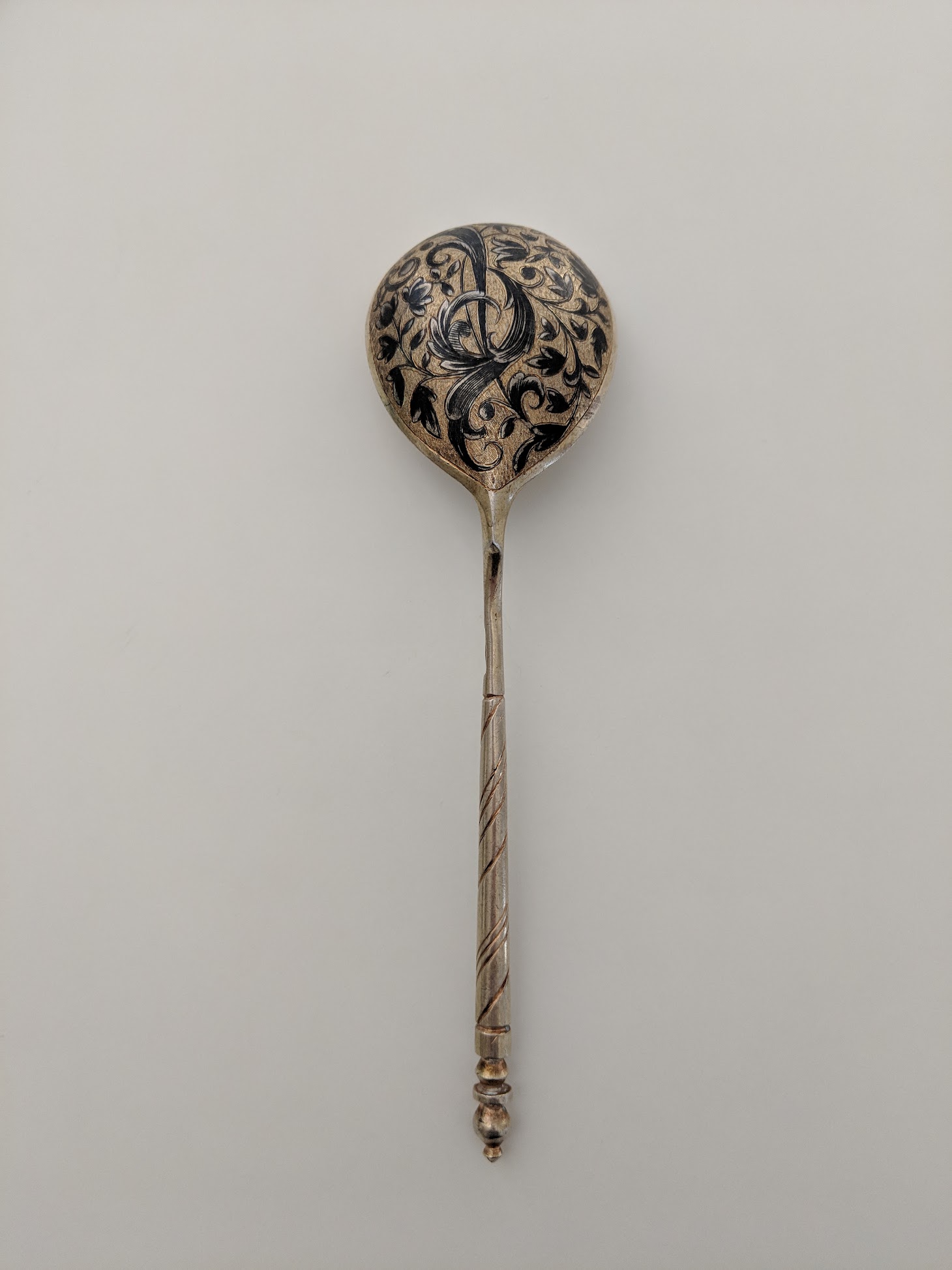 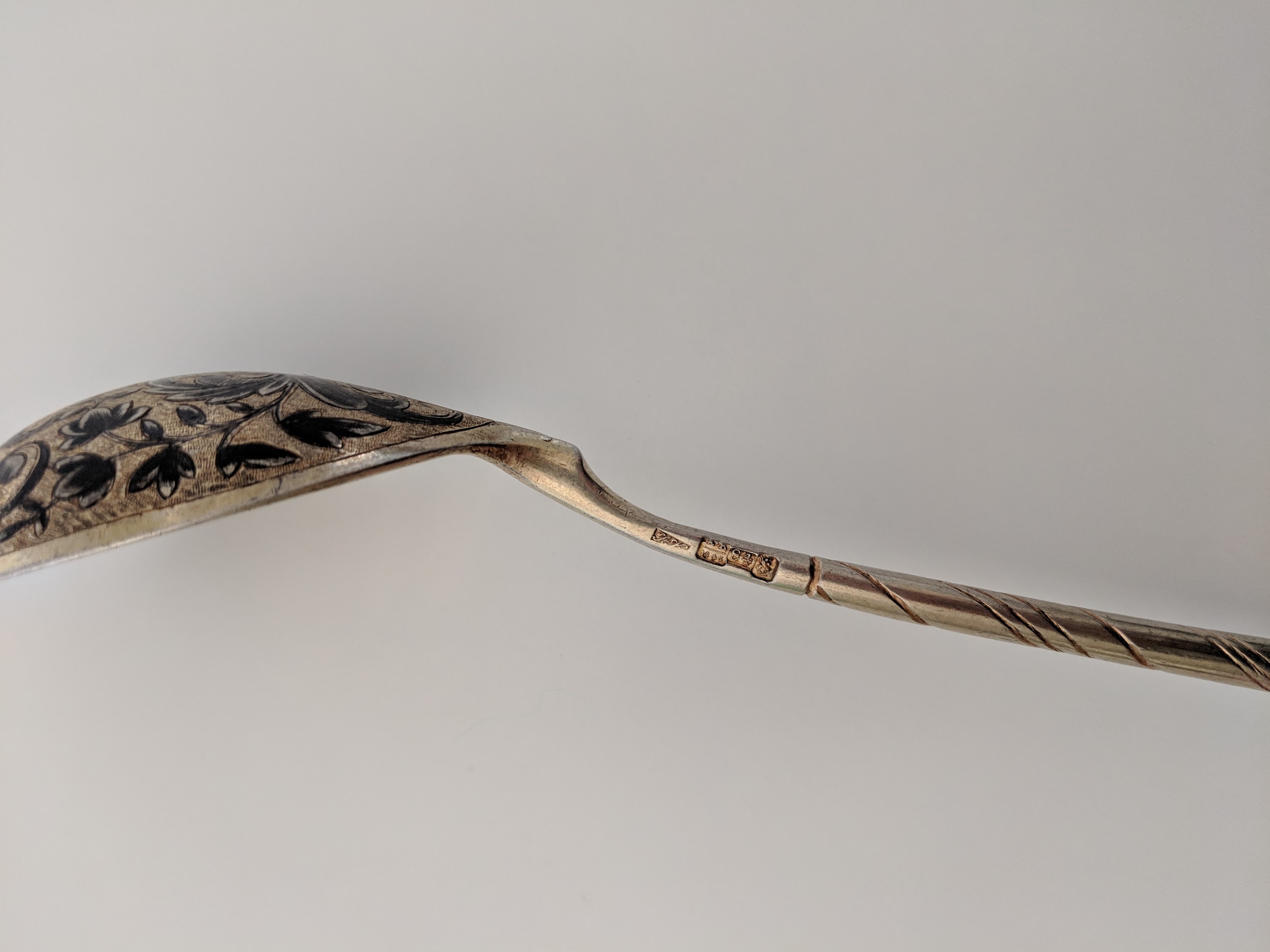 I think I made it clear that I have no source ...
Regards
Goldstein

This is an interesting input from you Goldstein. You are always so eager to demand, almost force, everybody to reveal their sources. But now when both Ubaranda and AG2012 are asking for your source, you simply claim that you have no source and start to waffle about a "friendly note" from a Russian friend. If I would have said that, you would have immediately stated that "that is a dubious/suspicious/unreliable source worth nothing!!! Such information is worthless etc. etc. !!! Such statements written by you ares often seen here. Now you have guts to say yourself that you have no source! That makes me wonder who is the unreliable source here?

Goldstein!
Here is lesson number 1 for you: From now on, never, NEVER, demand anybody to reveal his source, just believe what is written unless you can show waterproof evidences of it being something else.
Lesson number 2 will be how to make nice and polite inputs not offending anybody.

No reason for you to reply to the above stated. The bridges are burn!
Top