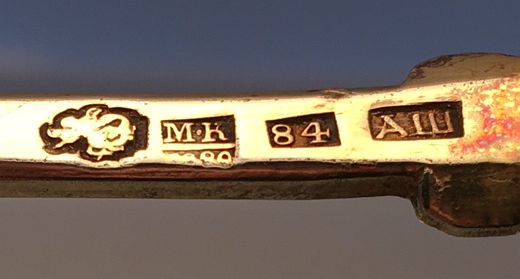 Motif: hunter with rifle
Hunters with shotguns and wolves in the background were popular motifs on niello-cups and hunting knives in the 18th/19th century. 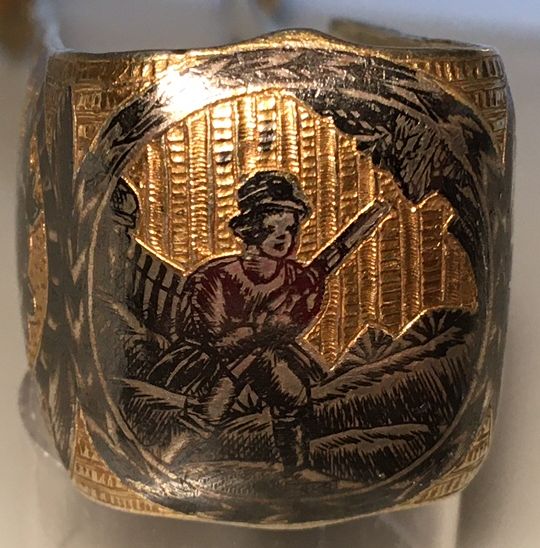 Times have changed.
What's your favourite? 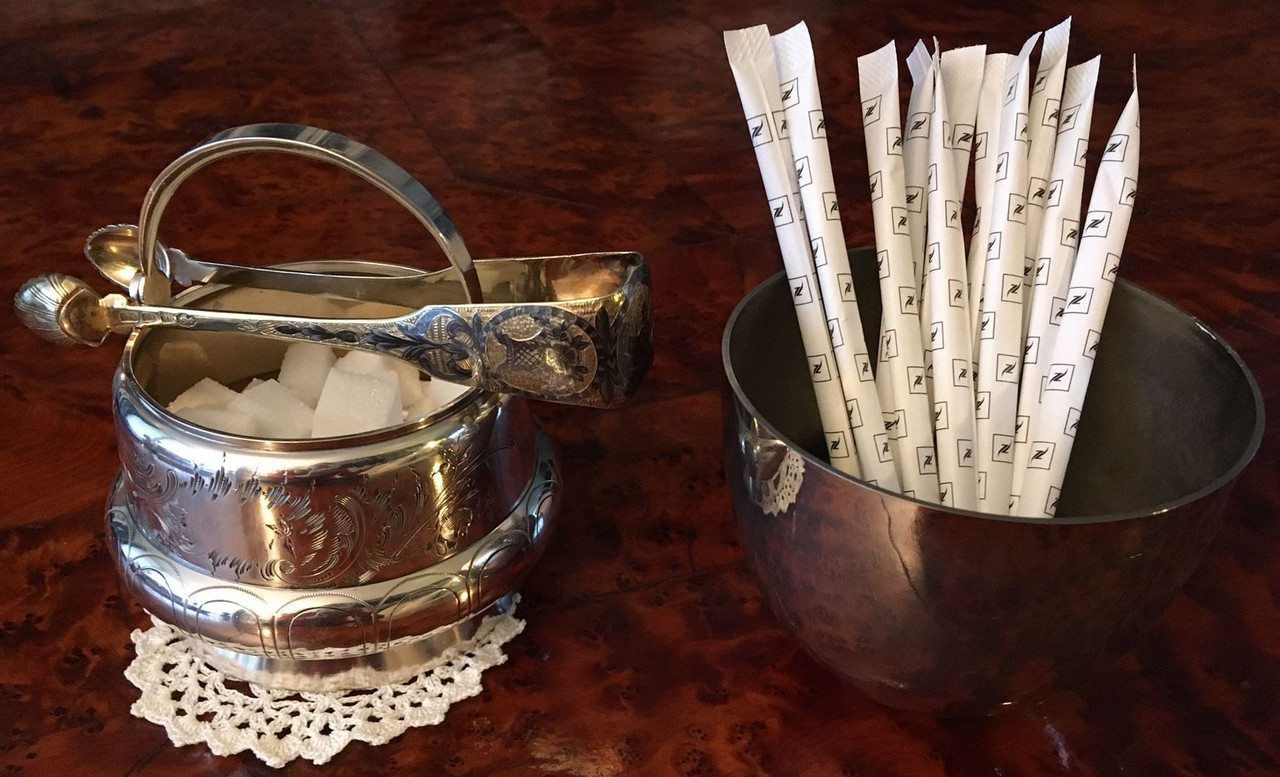 Thank you very much Ubaranda,

what you write is correct:
Karpinsky, Mikhail - PL 2089 + 2099, Moskow
I looked at Watts p 82.
Moscow and St. Petersburg stand among themselves.
I looked too quickly.

please can any of you name the maker of my sugar tongs.

I want to show you an illustration of a niello milk jug with a hunter (Tobolsk 1778, The State Historical Museum, Moscow) which I found in my book: 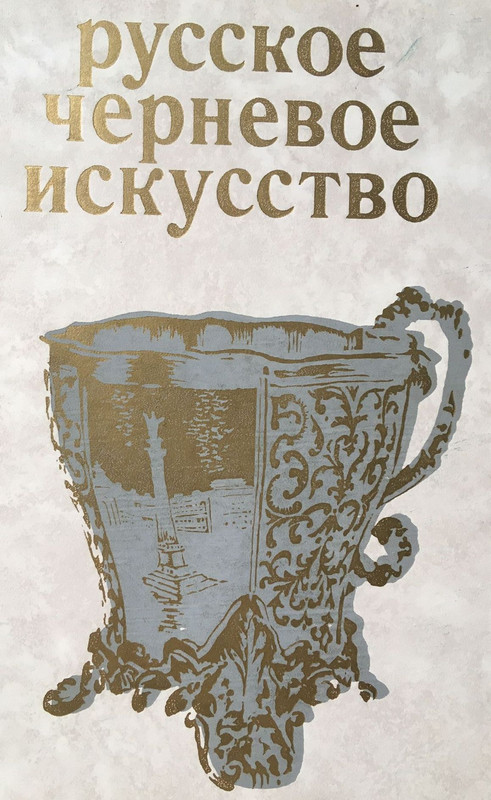 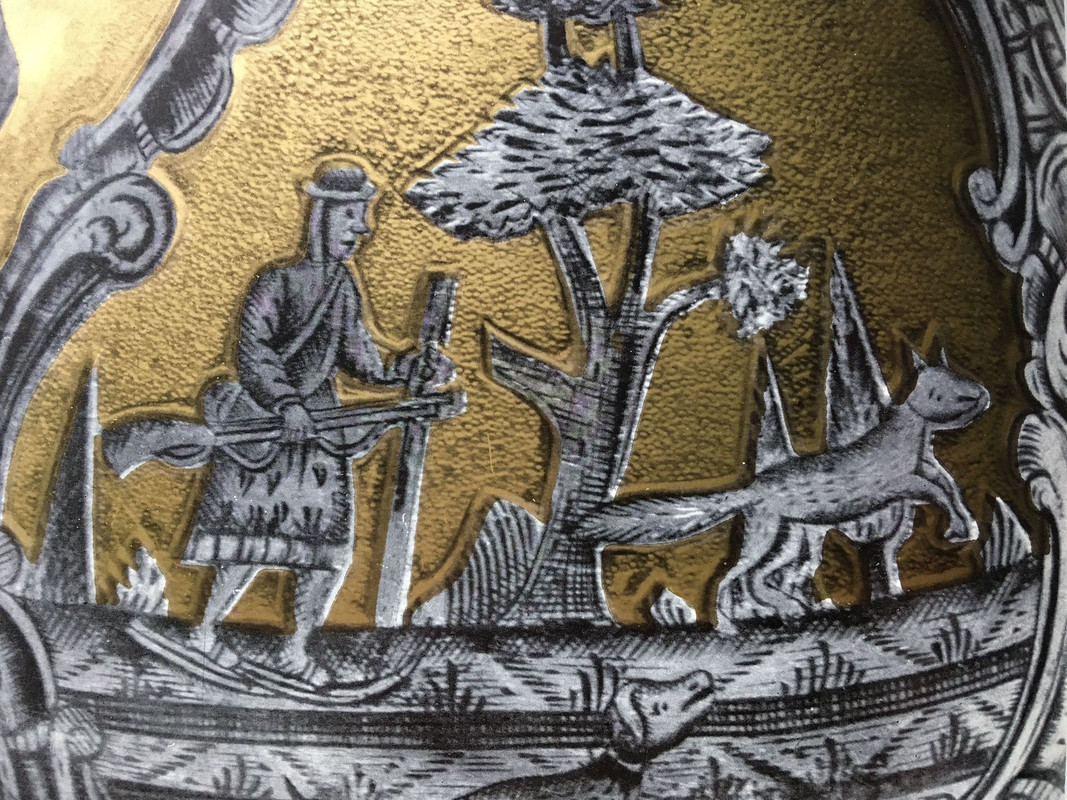 By the way, my sugar tongs have found a noble place.
This jug belonged to a service belonging to the Governor of Siberia DI Chicherin. (Tobolsk 1775, The State Museum, Kreml).
Unfortunately, the excursion only took place on paper... 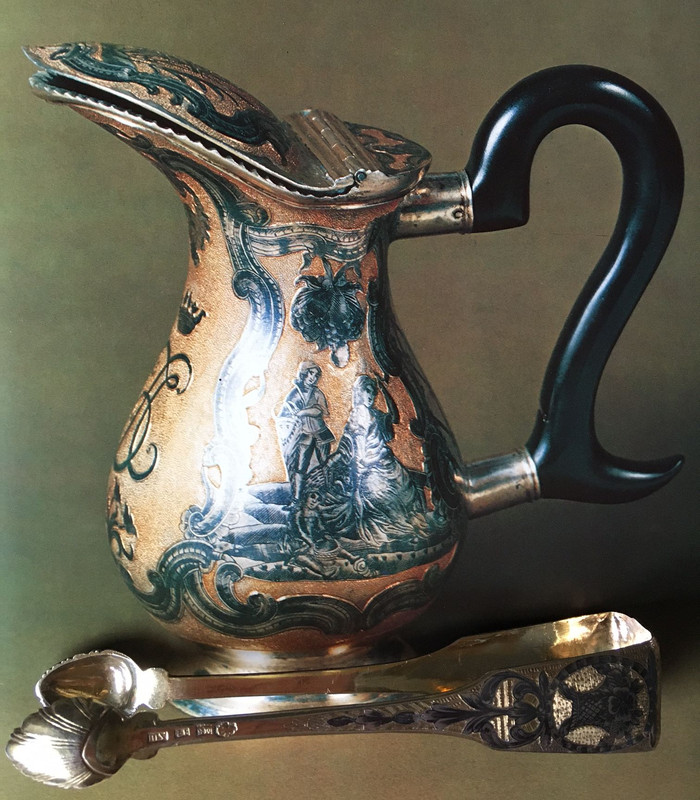 Let's start from the beginning. This is my best shot!

MK is the assayer (official) in Moscow. He is Mihail Karpinsky, active 1800-1824 in Moscow. This town mark of Moscow was used during the first half of the 19th century. Ubaranda's suggestion 1820 is quite possible.
АШ is the maker (goldsmith/master). Unfortunately I don't know his name. (There are still many to name unknown masters in imperial Russia). However, it cannot be Andrey Shihin because he worked in Tver (as also mentioned!), not in Moscow.
If somebody knows the name (АШ), I would be happy to know it, thank you in advance!
FYI,
Please, avoid Watts, it contains too much "mistakes" as well as misspellings!
Top

thank you for answering immediately.
If it is not possible to name the maker, russian silver is undoubtedly
"Sugar for the eyes".

My pleasure. Please note that I didn't write it is impossible but "I don't know the full name!". One cannot know it all :-)))
Top

I appreciate your feedback. 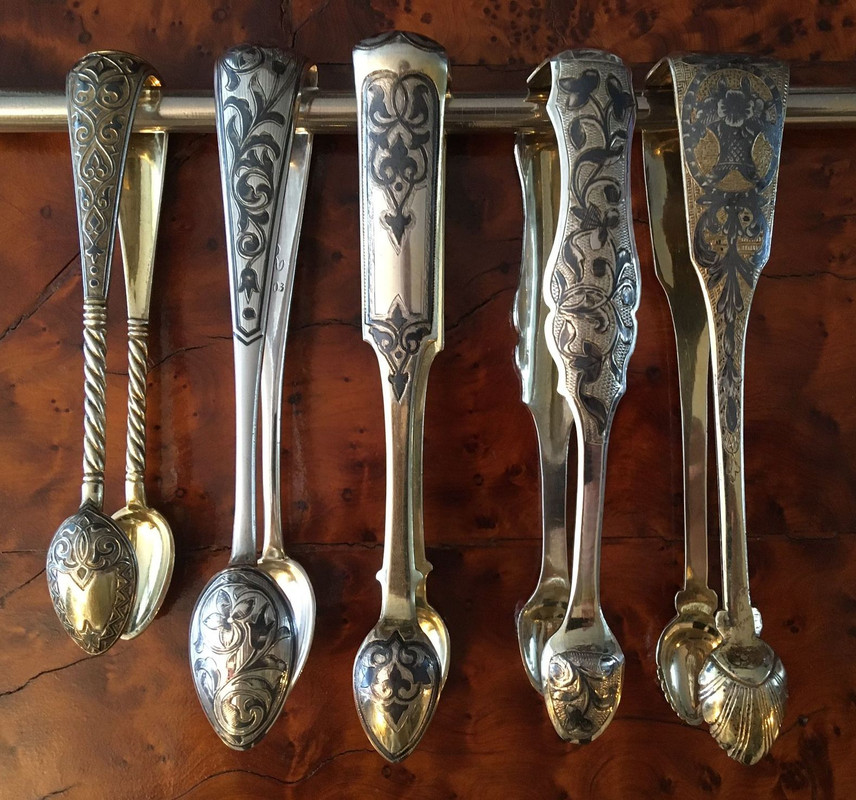 Yes the punch MC is most likely Maria Sokolova in Moscow 1886-1908. However, please keep in mind that in those days a female silversmith was something out of question, but! Maria Sokolova was the owner of a silver workshop. To my understanding she inherited it from her father after his death. She didn't, anyway, make anything and was not a skilled master, but as a daughter of her deceased father she got the right to punch her mark on objects made in her father's workshop to her own death! The same was possible for a deceased master's widow! Therefore you sometimes can stumble into female names in Russian silver/gold punches, but that doesn't mean that there were skilled female master in former Russia, no way! This has been discussed/mentioned here before!
Top

thanks for your information „Maria Sokolova“.

Not quite relevant to the topic, but interesting to know:
„By the end of the 19th century, the position of women in Russian society was not as unequivocally disenfranchised as it is commonly thought to be.

Women found ways to solve their familiar problems, manage enterprises and firms. Of course, all these opportunities were not easy to implement and only the most energetic of Russian women succeeded.

Russian Imperial law did not discriminate between men and women in the sphere of business ownership.

Imperial Law also made no distinction between women and men in terms of taxes. A woman could set up a commercial enterprise and join the merchant class, provided that she paid the taxes. 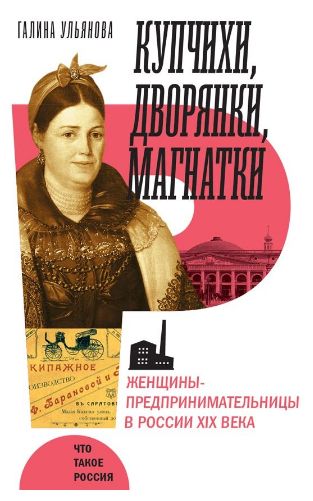 The question was only that were there female goldsmiths in imperial Russia and nothing else? The answer is still NO! That was mission impossible in Russia in those days. There is not a single document known that would would prove/show that women at that time could train as goldsmiths. But what is a known fact is that wives and daughters who inherited the business (with the workshop) could continue with it and as I mentioned earlier have a punch of their own after their husband's/father's death. That doesn't make them a master! However, they could and some did manage the business but that was all!

The goldsmith workshop was not a place for women. It was a dirty place with harsh language etc...

What has the book you show to do with this? Of course women could work etc...but not as goldsmiths!
Top

that's how I understood it!

#Silverstone
No problem, it is OK if you understod that there were no female masters!
Have a nice evening!
Top
Post Reply
15 posts • Page 1 of 1