Both large and small suppliers in this field have been known to place a name or trademark upon silverware products in place of an established maker mark. Several are known, others remain undocumented. This would be a place to add any information that might help trace odds names back to the origins of the actual maker, be it an established silvermaker or a factory opened by the owners of the supply company itself.

SIEGEL, COOPER & Co.--marks or brands unknown.
Dry Goods Reporter Vol. 5 1905 has revealed that the Siegel, Cooper & Company store in Manhattan New York was active in the Hotel Supply Field. Since this information has just come to light, it is not yet known what lines they carried or whether they are among those who replaced maker names. Just one to be on the lookout for until more is known.

The Dohrman Hotel Supply Company (San Francisco, Ca) applied for a trademark on the name DOHRCO in 1947 (granted 1949) claiming first use on silverware items (delineated) from 01 January 1928. [Additional following word marks such as Pacific, Gramercy, etc. may be pattern names.]
Top

For those collectors trying to match their identifiable commercial silverware to the correct china service that it accompanied, this may help you where John Maddock & Sons is concerned. The impressed crown and numeral date coding system appears to have started during the reign of Victoria (still trying to break this code) and runs through Edward VII & George V. At some point, an ink stamped letter-number code begins. So far, I believe the letters are sequentially ordered to represent years and may have started with "A" around the time of George's demise in January 1936. Why? All later letter codes (V, W, etc.) appear in the era of "Ultra Vitrified" wares with backstamps dating from 1955+. Additionally, sometime prior to 1972 the code system changes to a straight number-number stamp (i.e. Month/Year such as 5/72). Logically, if "Z" occurs during the 1960's, then "A" must have begun after c.1936. If I can ultimately find the actual switch-over dates, I will post them for you. (It is not known if the number after a letter, such as "W-4", represents a month or a quarter.) All of this is preliminary work only and not conclusive. Hope this helps you match your services to your silver. Maddock wares were used around the globe.
Top

A piece of commercial china has surfaced raising supplier questions. The size of a small oval vegetable bowl (like a soap dish), it bears the late-era topmark for the European-based Wagons-Lits Company surround by an "Arabic" design. The backstamp indicates "Egypt" and "Mostorod" for the source. Wagons-Lits aquired control of Cook in the late 1920's when the latter firm controlled a fleet of Nile River Boats based in Cairo. (They may have had hotels also). Mostorod is apparently an oil production region near Cairo. The china is decorated in maroon, roughly indicating 1970's-1980's when Wagons-Lits went to this color. If there was a shift from traditional European china suppliers at this time, there may have also been a change in silverware suppliers to a middle-east source. (Any information on regional sources could be helpful if you have it.) Something new to watch for.
Top

Add'l--M. Seller of M. Seller & Co. Portland/Seattle/Spokane (serving near states) died in 1915, but firm survived. In 1916, Seller purchased stock and goodwill of the Portland-based Prael, Hegele & Co. with intent to close the latter. Dohrmann Hotel Supply, formed in this era, eventually occupies the territory where Seller operated including Salt Lake City. As stated in notes from above link, all crockery companies normally dealt in flatwares (ie, silverwares).
Top

Washington State records of corporations operating there show Dohrman Hotel Supply (San Fran. based) working in 1918. In addition, Brodie Hotel Supply (c.1969-1980's) becomes Brodie/Dohrmann through aquisitions over time...sells out to S. E. Rykoff. (Brodie silverware can be back-marked with their name.)
Top

A hammered-metal silverplated fork bearing a topmark (script name) for Liggett's was spotted with a supplier name (back cast) for Barth-Pick. Albert Pick was formally incorporated during the 1920's and subsequently merged with the L. Barth Company in that decade. Pick had specialized in design and set-up of dining services, especially commissary and lunch-room types, as well as acting as a supplier. Liggett's Drug Store chain was separate but related to Louis Liggett's United Drug Company. This firm also controlled the Rexall branding used by other chains. In addition, a specially equipped Rexall Train toured the United States during the 1930's promoting the company's products [An unidentified dining service could exist for the Pullman car carried in the train, staffed by Pullman]. So far, none of the Liggett china is known to carry a supplier backstamp. How far Pick and/or Barth went into providing the dining supplies, and for how long, is not clear.
Top

The hammered metal flatware mentioned above would likely be the Franklin Pattern of 1919- (also made under the E.H.H. Smith company mark).
Top

Clarifying notes on commercial flatware carrying Victor S(ilver) Company mark. Victor was originally a brand name of Derby Silver Company used only on holloware, Derby having ceased production of flatware sometime before c.1879 (using old Redfield & Rice tooling). While Derby became part of International Silver Company, the Victor name did not appear on flatware until c.1922. However, patterns used for Victor date back to at least 1905 and were produced by differing member firms at their plants. International had a commercial or hotel division from the early 1900's until 1972 (when it became World Tableware). Wares for this division would have come from the varying plants carrying their own marks until the Victor name came into use for that line (and possibly concurrent with that useage). Victor was not a division, but a brand and only for commercial clients on flatware.
Top

Can't put in a (commercial rules) direct link, but Gooogle books has Chilton Hotel Supply index for 1922 showing commercial silver suppliers and (one page beyond) an International Silver advert. listing quite a few of their client firms at the time, broken down by type of business..hotel, rail, restaurant, etc..
Top

Here's the International Silver Co's advertisement that Traintime referred to: An attempt to research the Diamond Silver Company of Lambertville New Jersey is yielding some minor results (although some book resource access is blocked). This company turns up in a hospital (institutional) supplies reference, suggesting some level of a commercial wares business was carried on. The site of the Lambertville Pottery Company (sanitary toiletry products) of 1909-25 appears to have become Plant 1 of Diamond Silver around 1932 (based on a school alumni record of someone who was working as a plater then) until closing in 1954 (based on a bio of a woman who worked there). Although the company's name surfaces for Delaware 1947 (a securities ref.), there is a New Jersey legislature action in 1955 which could related to abandoned or revoked charters (???). Traditional histories hold that Ecko Products, in a great post-war expansion, purchased the firm. Ecko is normally associated with household goods, but there does seem to be a commercial wares side to this business whose origins were fountain supplies related. There are no indications that Diamond Silver ever did custom work and the known number of patterns is very limited. There have been questions of whether some flatwares were gold plated (maybe gold-toned) in addition to their silverplate work.
Top

Voss and Koock of Austin Texas appears to have supplied Lashar branded silverwares to Concordia College according to this letter in Texas history files: https://texashistory.unt.edu/ark:/67531 ... 6563/m1/5/

An immigrant from Europe with twenty years experience, Voss opened H.H. Voss & Company (later renamed Voss & Koock) dealing in wholesale and retail lines. He is known to have been on a pottery buying trip in Ohio. Late letterheads have dropped Retail and added Hotel Supplies. His son opened a new company called H.H. Voss some years after the original firm.
Top

Some background on Herman Heinrich Voss of Breman Germany (thence Austin TX), his partner, his son Herman F. and the companies they ran (unfortunately omitting that they supplied silverwares): http://www.austintexas.gov/edims/document.cfm?id=138630

Concordia College began as a boy's school evolving into the Concordia University of today.
Top

From Yellow Pages, Pacific Northwest Bell, Eugene Springfield & nearby towns, 1976/77:
Brodie (see prior) Supply ad claiming origins to 1909...Dohrmann Co. is found under Inn Keepers and limited at this time to a phone number 800/452-9933. Two other ads for more local suppliers which mention Silver/Silverware. 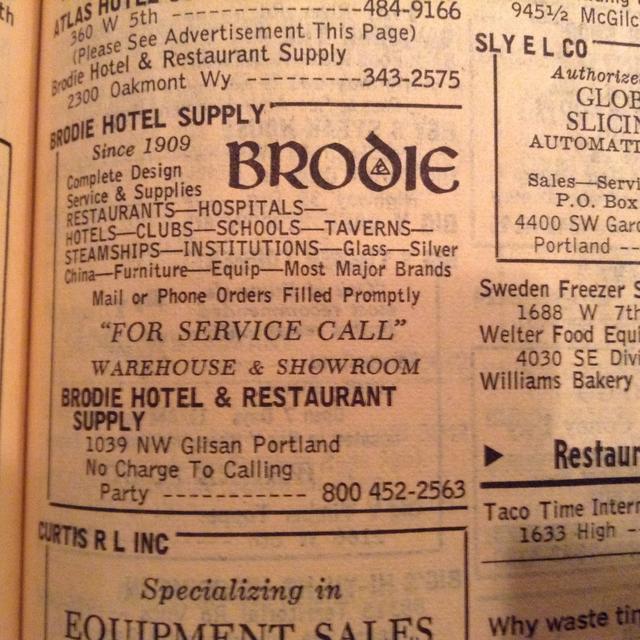 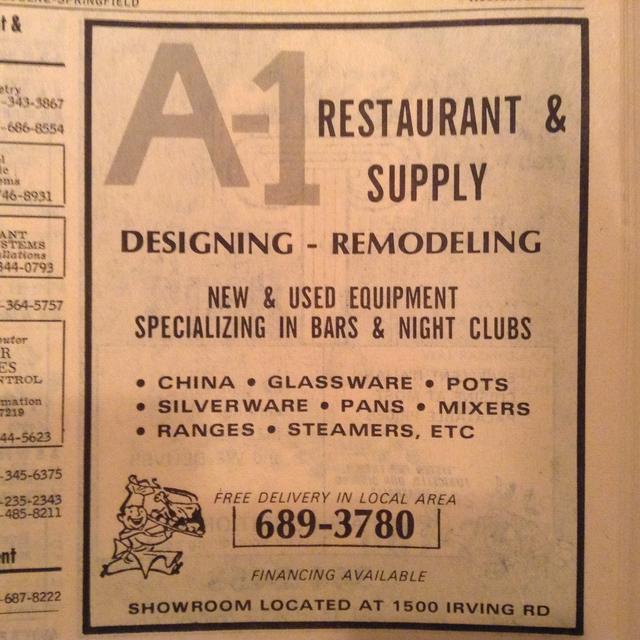 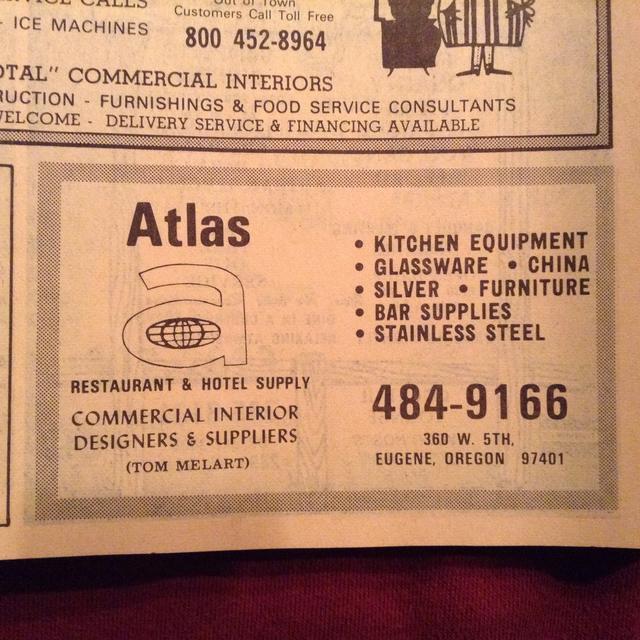 [Yes, this is the then current phone book from when they were filming Animal House in the area and where the idea for Blue Brothers was hatched.]
Top

Lily Service: The onset of (alcohol) Prohibition in the United States brought about a rise in the popularity of less intoxicating treats. In 1922, the Public Service Cup Company of Brooklyn, manufacturers of Lily Paper and Lily Cups, mentioned in an advertisement for a Soda Fountain trade publication that sundae cups were now available. The ad showed their regular tall cup frame (with the paper insert) which matches the arches design on the sundae frames in the following photos: 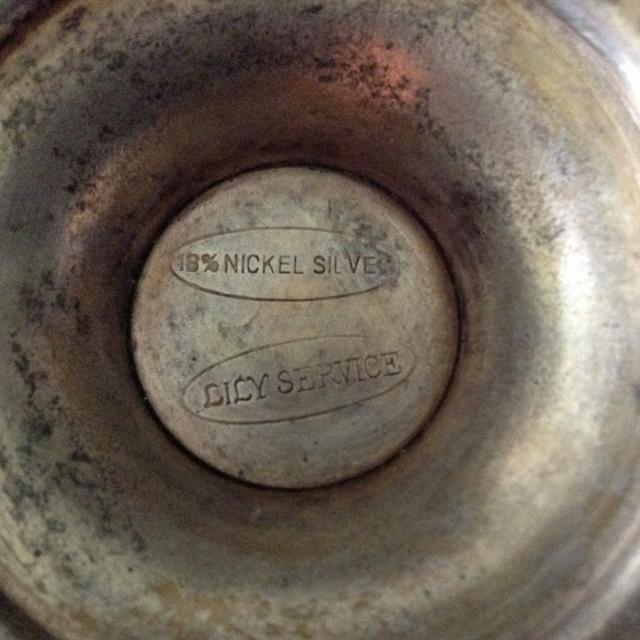 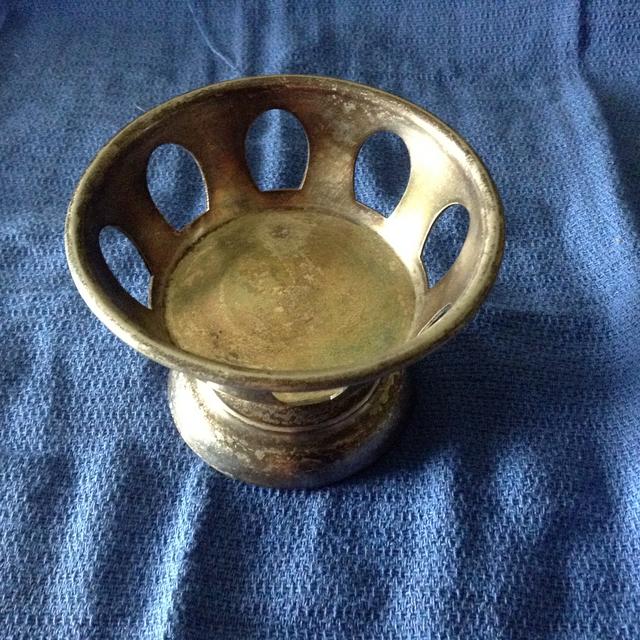 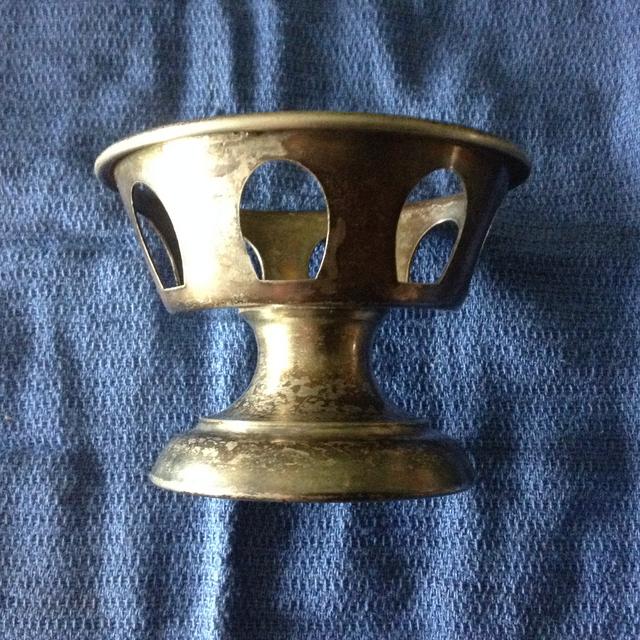 18% Nickel Silver is a reference to the base metal. The frames appear to be silver plated, though this is never mentioned. Lily would eventually become Lily-Tulip. Adults may have gotten back their booze and handed the soda fountain craze over to the generations of teenages to come, but the paper trade was set to stay..though without the silver as stainless steel largely bumped it from the scene.
Top

Site with extensive information on the paper cup industry and competitors...Public Service Cup Company and Lily Corporation (sales end of the products) are covered in these files: https://sites.lafayette.edu/dixiecollec ... p-company/
Top