A lady visitor staying at the Queen's Hotel, Hastings, left jewels, value £250, in her bedroom, and missed them on her return. Investigations led to the arrest of a watchmaker named William Bowra, who had visited the hotel during the time of the lady's absence to wind clocks. Most of the jewellery was afterwards found at the house of the accused concealed in a water tank. 
Thought to have been in business since at least 1960.


MULLICK AND WURZEL LIMITED
At an Extraordinary General Meeting of the above-named Company, duly convened, and held at 4 Catesby Garden, Yateley, Camberley, Surrey GU17 7FQ, on 30th March 1990, the subjoined Special Resolution was duly passed:
"That the Company be wound up voluntarily, and that Norman Nathan Pampel, of Harben House, Harben Parade, Finchley Road, London NW3 8LH, be and he is hereby appointed Liquidator for the purposes of such winding-up."
M. A. Mullick, Chairman "Trelfers Jewellers" of Horsham closed in 2019, 138 years after the establishment of the West Sussex/South Surrey business.
Below are 2 references covering mainly the later history of the Jewellers, and after those is an image from the silk of a box containing a set of 1928 Sheffield made teaspoons.

This from the first third of the of the 20th century is an example of an earlier trading name, "B.H.Trelfer Ltd".

Next there are 2 images of adverts reverenced on "Trelfers" web site but with more precise dating. 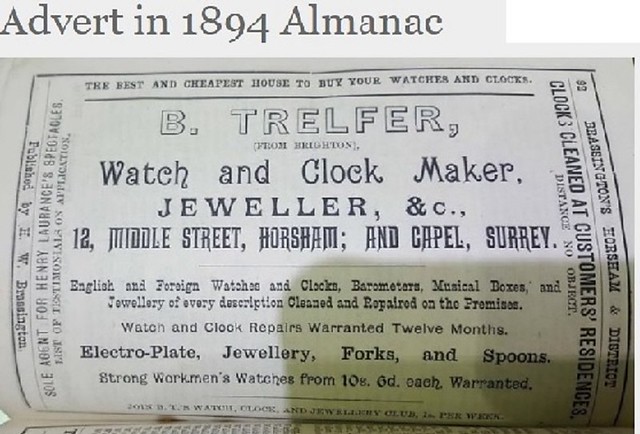 The 1894 just has the simple "B.Trelfer" name and prominently proclaims the "clock and watch maker" part of the business. Spectacles are also supplied. More interestingly under the Trelfer name it says "from Brighton". I will return to "from Brighton" at the end of the post.

On the July 1905 advert we see this same trading name as on the spoon box silk.

From geneology references it seems a "Benjamin Trelfer" was born 1853/54 in Brighton Sussex. His father was called George and among other siblings he had a younger brother also called George. By the 1880 Benjamin was a widower with a son but in this same year he remarried in Horsham.

In 1881, with his new wife, he lived with at "Park Ter East" in Horsham and he was described as a Watchmaker Journeyman. The son, aged 4, "Henry B" (note name) was a "scholar". I at present do not have access to the true census records but the "Rootspoint" site gives "Henry" as the reported christian name. It is interesting to note that 1881 is the date given for the establishment of Horsham's "Trelfers Jewellers". 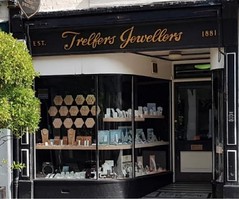 In 1891, Benjamin (37, Watchmaker) with wife Caroline lived at Capel Street in Capel, Surrey. The young "Henry B" is not present. However along with two young daughters at the address, there is a nephew Frederick C George (19, Watchmakers Assistant). Seemingly an expanding business.

In 1901 Benjamin (46, Watchmaker) and Caroline lived at "Roseberry Terrace" in Horsham with three children: Mabel C, Amelia M and Leonard V. There is confirmatory reference for this address from a Horsham in a Sussex Street Directory PDF (but no date).

A second "Benjamin Trelfer" is back in the picture in 1901. "Benjamin H Trelfer", aged 24, a watchmaker is a boarder at 1 Capel Street, Capel. He is described as working at home on "own account".
I found 2 more undated PDF references for "Trelfer BenJamin", but at 35 North street & 136 New street, Horsha:m. One was a Street directory entry and the other from a Trade directory. "35 North Street" is an address present in the 1905 advert on which the business is proclaimed as "B.H.Trelfer Ltd" and as now "removed" to their new (and final) resting place at 9 East Street.
Could this 1901-1904 period be the change over time for the business from father to son? 1911 finds "Benjamin Trelfer", aged 56 "Watchmaker", living in London, having married again in 1905 and "Leonard" is still living with him. Also in 1911 "Benjamin H Trelfer" aged 34 is a "Watchmaker Dealer" at 9 East Street Horsham and an "Employer".
There is a death record for "Benjamin H Trelfer", for the 1st quarter of 1954 in Horsham which nearly ties with change of ownership that is described in the newspaper article that I reference earlier.

Something else I mentioned earlier was the "from Brighton" on the 1894 Advert. It is possible it was a simple indication of coming from a larger much more important town than Horsham, but I wonder if was to indicate a connection with another watch maker concern.
There is a reference on line circa 1881 "George Trelfer 24, jeweller, at "6 Barrowcliffe Cottages Brighton". This is indicated to be Benjamin's brother, so could they have trained or been in business together before Benjamin married in 1880 and moved to Horsham?

'Goldsmith and Jeweller to his Royal Highness the Prince of Wales.' 
Bonner v. Lyon.—In the Queen's Bench Division on the 8th ult. (Thursday), before Justices Grantham and Vaughan Williams, sitting as a Divisional Court, the case of Bonner and Co. v. Lyon and another came on for hearing. The action was brought by the plaintiff's, who are jewellers in Brighton, against the defendants, Mr. and Mrs. Lyon, to recover the price of certain goods sold by them to Mrs. Lyon, and when the case was tried before Mr. Justice Denman and a jury at Lewes, a verdict was given for the plaintiffs against Mrs. Lyon. In the present action the plaintiffs wished to enter judgment in their favour against the separate estate of Mrs. Lyon, and their motion was resisted on the ground that they had not proved she possessed private property at the time the goods were bought. After hearing the arguments, their Lordships ordered judgment to be entered for plaintiffs for £144 and costs.


MASTERS, J. N., Ltd., Watchmakers, Jewellers and General Merchants, Hope Stores, Rye, Sussex. Hours of Business: 8.30 a.m. to 6 p.m. Established in 1869 by J. N. Masters. Incorporated as a Limited Company in 1898. Directors: J. N. Masters (Governing Director), J. G. Broad, A. G. Whitehead, H. J. Masters and H. W. Stuttle. Originally Watchmakers and Jewellers, now also Clothiers, Boot Stores, Domestic Machinery and General Merchants. Have had the honour of supplying Buckingham Palace and Windsor Castle, and received the thanks of H.R.H. Princess Adolf of Schaumberg Lippe, for Victorian Watches supplied to her command, which gave entire satisfaction. Publishers for the 29th year of " The Bluejacket and Soldier " Magazine. In 1909 His late Majesty King Edward VII. personally selected and signed his favourite photographs in Naval and Military uniform for it, and in 1911 a similar honour was received from H.M. King George. Premises: Originally at 21, High Street. In 1884, removed to 95, High Street, and to 8 and 9, High Street in 1899. Workrooms consist of twenty-two large rooms in an old mansion. Staff: Eighty-five. Speciality: The " Veracity ' Watch. Patents: Dripless Tea Cup, No. 25410. Large number of registered Designs in Church Jewellery, Patriotic Watches, Queen Victoria Jubilee and Diamond Jubilee Brooches, &c. Connection: World-wide. Large Mail Order business to Colonial and Foreign Countries. Telephone: No. 21 Rye. Telegraphic Address: " Masters, Ltd.,Rye."Bankers: London County and Westminster Bank, Ltd., and Bank of British West Africa, Ltd. Mr. J. N. Masters is an Alderman and has been Mayor of Rye. Chairman of the Committee for the Preservation of the Ancient Buildings of Rye. A listing of Silversmiths, Watchmaker, Jewellers, etc., working in Croydon in 1851:

Source: A New Commercial and General Directory of the Town of Croydon - 1851

The business of John Adolph Daldorph. 
An example of the work and mark of H.G. Croneen: Horace George Croneen used the services of the Birmingham and Chester assay offices.


Notice is hereby given that the Partnership heretofore subsisting between us the undersigned Horace George Croneen, William Croneen, and Henry Skiller carrying on business as Jewellers and Watchmakers at 390 High-street, Rochester, Kent under the style or firm of Croneen and Skiller has been dissolved by mutual consent as and from the twenty-ninth day of September 1896. All debts due to and owing by the said late firm will be received and paid by the said Henry Skiller.— Dated 9th day of March 1897.
H. G. CRONEEN.
W. CRONEEN.
H. SKILLER.