It is well known that a few British silverplaters used date codes on their products, Elkingtons, Walker & Hall, and Barnards were three such companies. But are there others? In the past there has been speculation that Mappin & Webb may be another of those who dated their output, but I've never heard that anyone has found anything conclusive.

Below are seven examples that are likely to be Mappin & Webb date letters:

I was hoping that if any member has any further examples of possible Mappin & Webb dateletters they will add them to this post, and who knows, maybe one day we can crack the codes.

Thanks for posting the images.

I was at a fare on Sunday and saw some Mappin & Webb plated ware with the possible date letters and British Registered Design Numbers. I didn't have the time or materials to record any information this time round, but such marks will hopefully provide a valuable clue if and when we get enough information together.

I am afraid it has taken me a while to respond. Plated silver is not really my “thing” but we do have quite a lot of Mappin and Webb silverplated flatware and cutlery which sits somewhere between stainless steel in the kitchen and real silver for “best”. It is in their Athenian pattern, an Art Deco design.

In 1965 we bought 6 place settings new from Mappin and Webb. They came from stock and most are marked X but some are V or W. From this I deduce that X is probably 1965, W 1964 and V 1963. In the picture below I have added a Y which seems to be in the same series, found on a second hand piece bought some years later.

At some stage in the 1990s we added a few more new knives. These are marked Z or A. If one assumes a 26 letter cycle this would make Z circa 1993 and A circa 1994. In the picture below I also show the A from a fork which I think was bought new at the same time, though I am not positive.

In the late 1980s and early 1990s we also added some other second hand pieces of Mappin Plate in the same pattern with different date letters.

The differing layout and the variation between lower and upper case might suggest that these marks come from three distinct letter cycles but there is not enough time for this between 1931, when I think the pattern was introduced, and the dates in the 1960s and 1990s when I bought the new pieces illustrated earlier. Perhaps there was a single cycle with variations in presentation some years. In this case a 26 letter cycle would make B circa 1943 (I don’t think it is on a piece newer than the A that I have attributed to circa 1994), while G would be circa 1948 and t circa 1961.

In addition we acquired a few separate pieces and a second hand canteen for 8 of the same pattern but in Princes Plate which seems to be an earlier trade name. All the Princes Plate pieces are also marked RD 764440 at the base of the stem. I believe this number falls within the range for designs registered in 1931/2. The letters on these pieces are h, k, m and n. (Incidentally, the second k in the picture should not really be there: it is on a stray fork in a completely different pattern!)

I cannot fit these letters in with a cycle of any normal length that would lead up to the letters found on the Mappin Plate pieces. Assuming these are all indeed date letters, as they seem to be, I wonder whether there were completely separate cycles for Princes and Mappin Plate. If anybody knows when Princes Plate ceased and when Mappin Plate started to be used as a trade name it might throw further light on this and narrow down the date range for the letters on these pieces of Princes Plate.

I appreciate that this does not help much with older Mappin and Webb items but perhaps it is a start.

If there is, and it seems likely, different lettering sequences on 'Princes' and 'Mappin' plate, then this is perhaps why it has been difficult in the past to identify Mappin & Webb's date letter system or systems.

What we need is a ex-employee of M & W to join the forum and let us into the secret of the codes!

In the absence of information from the horse's mouth (i.e a Mappin and Webb insider) I think a trawl through M&W advertisements might help clarify when the firm started using the Princes Plate brand and when it was replaced by Mappin Plate. Also when the firm stopped using other quality descriptors such as the A1 in this latest example.That would help with broad dating and might provide more clues about the date letters.However, I lack the energy to tackle something like this. It needs an enthusiast for plated ware in general or M&W in particular.

I think it worth commenting on the way the firm's name is marked. In the examples I showed earlier the shape of the cartouche varies between the Mappin and the Princes Plate pieces. It varies again among the Princes Plate pieces, being placed in three separate cartouches for what I think are the earlier examples (h and k), as it is on the A1 example we now have. My gut feeling is that M&W would have stopped using A1 quite early in the last century.
Top

I see that the images in my earlier post have disappeared. I think Photobucket wants me to start paying for the privilege of being able to post pictures, which I am unlikely to do as I now use Picturetrail, or indeed a site specific host in the case of another forum for silver lovers. My apologies for having chosen the wrong host. It seemed a good idea the time. I now repeat a couple of the missing images of Mappin Plate and the earlier Princes Plate that are relevant to this post:

However, the point of posting now is to add another piece to the jigsaw. As already mentioned, the letters on Mappin Plate may possibly follow the same sequence as Sheffield silver date letters but those on the earlier Princes Plate seem to follow a different cycle.

The other day I noted a Mappin and Webb canteen in an auction catalogue. The flatware was Sheffield 1926 (date letter i). The knives were not silver and the blades were marked with the letter z. Knives with Mappin Plate handles have their blades marked with letters to match those on the flatware. It seems probable that knives with bone or composition handles were likewise marked with the same letters as silverplated pieces.

It would need a few more observations for this to be in any way conclusive but I hope it takes us a bit further. Of greater interest might be anything that throws light on still earlier marks back into the 19th century but I fear I cannot help there.
Top

Many thanks for taking the time to replace the missing images, it is appreciated. I also fell in to the trap of using Photobucket for a couple of years and am about a third of the way through of what seems an endless task of replacing them.

Thanks also for the likely pin-pointing of the 'z' relating to 1926, it's all very useful information. Like pieces of a jig-saw, it's only when you put them all together that make a complete picture.

Today I noted some Mappin & Webb tea and coffee pots supplied to the Air Ministry, and as was normal for government property of this type, they were marked with the year of supply:

The items were marked Mappin & Webb Ltd., with no mention of Prince's Plate, Mappin Plate, etc.

Last entry should read Furness Withy. Hotel was planned as early as 1923, but opened only by late 1932...might narrow down range for small letters (hollowware). The golf club opened earlier.
Top

Another clue if anyone can identify the client, Charlesworth's!!? Princes Plate oval tray W12674 with shield code of gothic letter (to be identified): 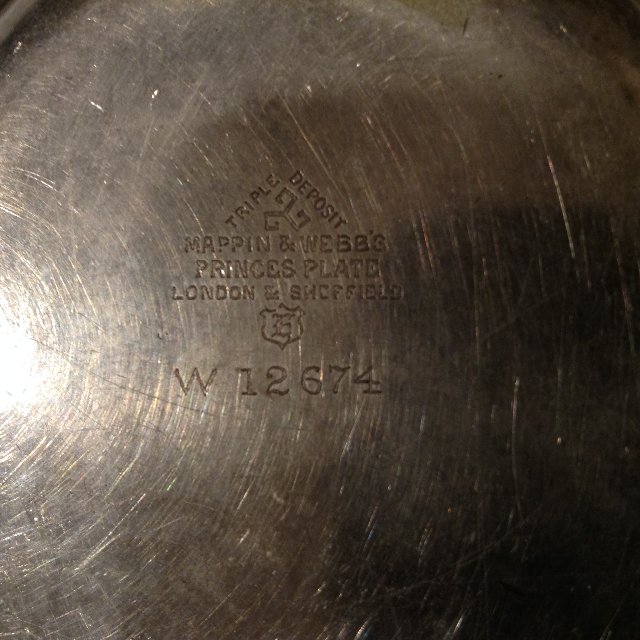 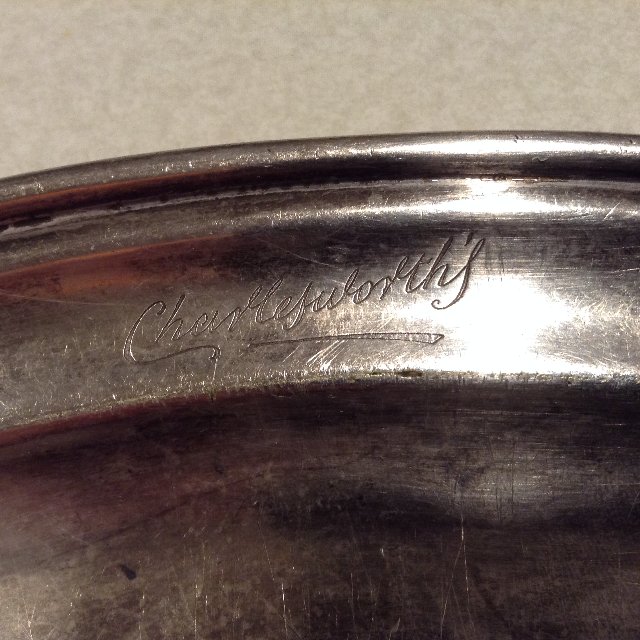 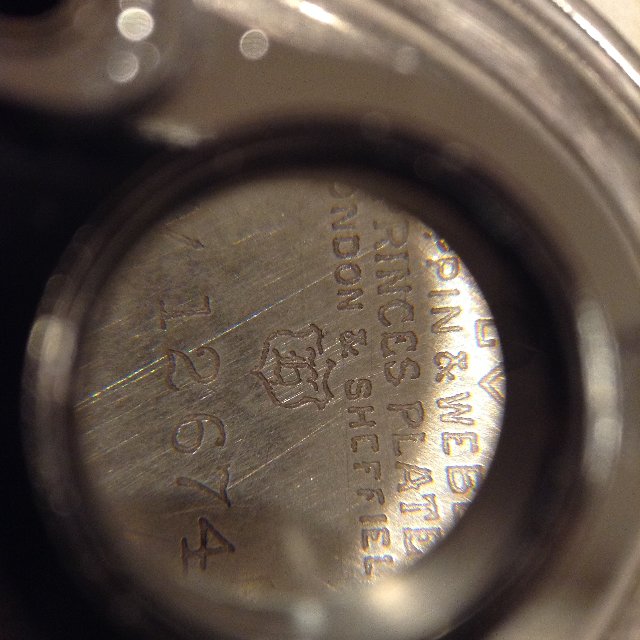 Users browsing this forum: No registered users and 33 guests