Following on somewhat from Oel's post on award marking (viewtopic.php?f=61&t=22389) I thought I would start a post on the practice of placing commercial marks, usually trademarks, that were applied in addition to British official hallmarks. John Millward Banks established his business in 1863, the company was styled J. Millward Banks & Co. as from c.1900. He died on the 1st February 1911, and the business was continued by his son, Francis M. Banks until 1925/6 when the firm was liquidated.

The firm's London agent was noted in 1892 as being T J Banks, the brother of John Millward Banks.


Another example of the additional mark, this one accompanied by Chester marks of 1901: In 1903 J M Banks also registered a mark at the Sheffield Assay Office.
It seems F M Banks didn't register his own mark after his father's death, the four Assay Offices presumably being content to accept the previous JMB marks sufficiently identified the continuing Company.

Many thanks, another piece of the jig-saw!

The 'Sunflower' mark of Child & Child: Originally recorded at 1, Seville Street, Knightsbridge, London, they later moved to 35, Alfred Place West (now known as Thurloe Street), South Kensington, opposite the V & A Museum, where their 'C & C Sunflower' mark is still to be seen in the stonework above the first floor window.

Child & Child received the patronage of the pre-Raphaelite artists Sir Edward Burne Jones, William Holman Hunt and the architect Sir Edwin Lutyens with their designs and the firm became a favourite with the Royal families of Great Britain, Prussia and Russia. HRH The Princess of Wales, the Princess Alexandra, granted Child & Child her Royal Warrant.

The partnership of Walter and Harold Child was dissolved in 1899 and Harold continued to run the business as sole proprietor until his death in 1915.

Child & Child entered their marks at the London Assay Office.

One of the most important jewellers in 19th century London was Phillips Brothers of Cockspur Street. Established in 1839 by Magnus and Robert Phillips they were renowned for their work, especially in that of coral and enamels. They exhibited at the Great Exhibition of 1851, the Dublin Exhibition of 1853, International Exhibition of 1862 and the Universal Exhibition in Paris in 1867. Much Victorian jewellery is unmarked, but pieces made by Phillips Brothers are to be found marked with the above back to back P mark, 'qp', beneath a plume of feathers.

Magnus Phillips left the business prior to 1851, leaving Robert Phillips as the sole owner of the firm, and under his control the business reached it great heights. They became known as Phillips Brothers & Son in c.1865. Robert Phillips died on the 21st April 1881 and the firm was continued by Helen, Alfred, William and Claude Phillips until 1884, and then by Alfred and Claude Phillips until 1889, when following the retirement of Claude, Alfred Phillips was left as the sole owner. Alfred Phillips died in France on the 17th July 1900. In 1902 the stock and goodwill were aquired by D & J Wellby Ltd. of Garrick Street.

This is the mark of the umbrella, walking stick, and whip manufacturer, T. Brigg & Sons of St James's Street, London: A brigg in full sail between the letters 'B' and 'S'. The mark is most often to be found struck in conjunction with the mark of the silversmith Charles Cooke who was the chief mounter of gold and silver ornaments to Brigg & Sons. 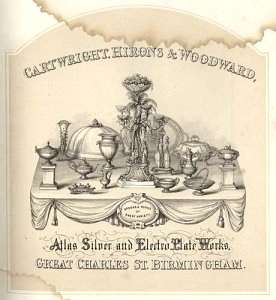 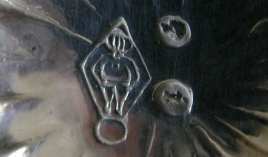 As for the origin of the 'cross arrows' themselves, they were taken from the Arms of the City of Sheffield. Walker & Hall introduced their pennant flag mark in 1861, but it was not registered at the Sheffield Assay Office as a maker's mark for the company until 1894. Thus for the period 1861-1894, when applied to silver items, it is an additional mark.

Although the pennant flag was introduced by Walker & Hall in 1861, it was not fully protected as a trade mark until a Perpetual Injunction in Chancery was granted on the 9th December 1895. The manufacturing jewellers, Steele & Dolphin Ltd. of Birmingham, added an additional mark 'Honor' contained within an oval, to their range of wedding rings in the early 1960's. An additional mark occasionally used by the firm of A.D. Loewenstark & Sons: The mark of The Six Pointed Star and Maltese Cross was originally registered in March 1682 by Benjamin Rich or William Birks, depending on the source. However, it was acquired by John Rodgers in 1724 and registered to Joseph Rodgers & Sons in 1764. It is found as an additional mark on sterling silver products of Joseph Rodgers & Sons Ltd.

Strictly speaking this is not a British additional mark as it is yet to be seen accompanying a set of British hallmarks, but it has been noted on jewellery struck also with the word 'SILVER'.

Further information regarding Thomas Hopwood can be found at:

Some Birmingham Trade Cards and Advertisements

This one is not clear, and not well struck, but appears to be Mappin & Webb's indicator mark for a registered design (Garter with Rd in centre).

Any others thoughts appreciated for this one.

An additional mark often used by the firm of Alfred Dunhill Ltd.: An unknown to me additional mark, 'M.A' noted on a Francis Higgins jnr. (Portland Co.) made spoon, assayed at London in 1859. 
An additional retailer mark for R. & W. Sorley noted on an item assayed under their name by the London Assay Office in 1939: