From the dining table to the forum silver Salt Pepper & Mustard set. Made by Reid & Sons Newcastle on Tyne, London year letter D for 1919. Mustard pot and open salt cellar have base with four ball feet.The mustard pot with a shell shape thumb piece, all have a cobalt blue glass liner. Pierced decoration, reed border. 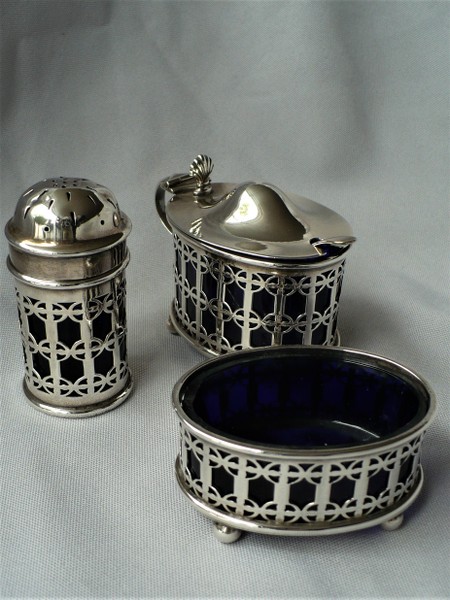 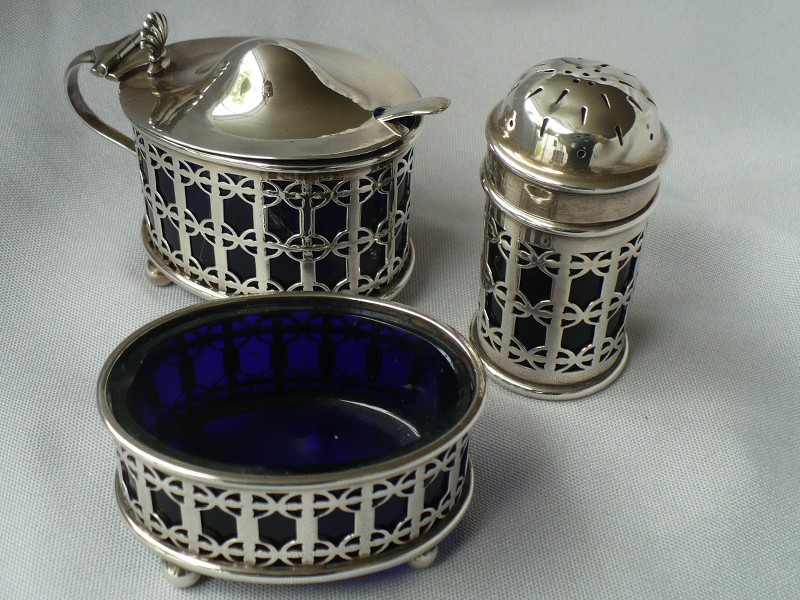 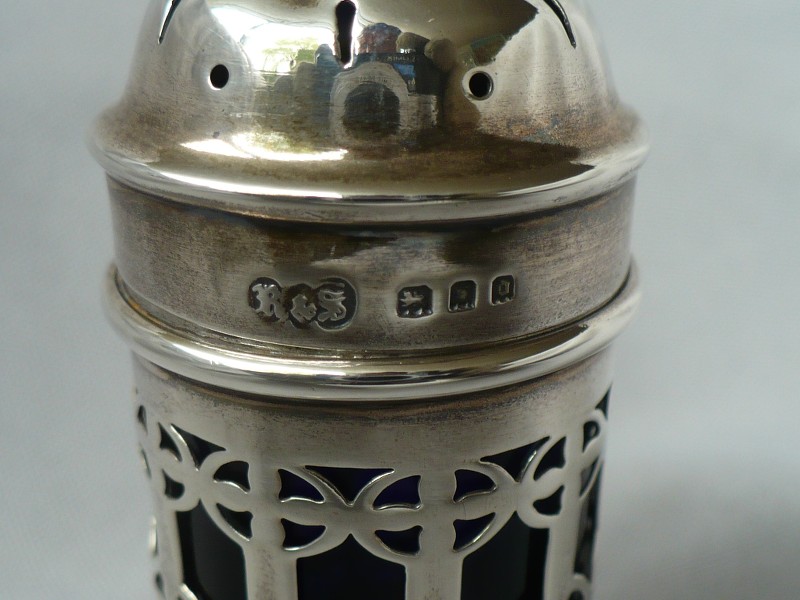 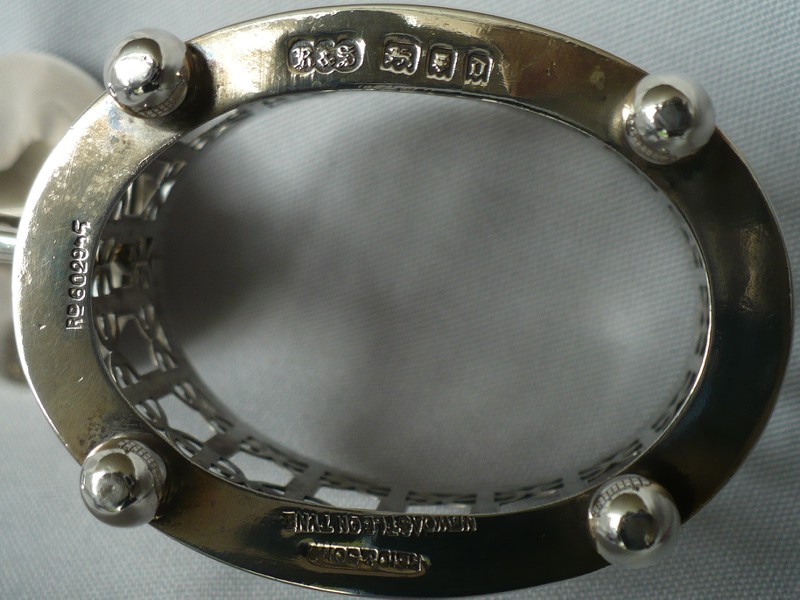 On Wednesday evening the premises of Messrs Reid and Sons, goldsmiths, Grainger-street, Newcastle, were broken into by thieves, supposed to be members of a London gang, who made off with several thousand pounds' worth of jewellery. The thieves entered a room above the shop and lowered themselves by ropes.

To celebrate the 175 years of establishment in the city, the firm of Reid & Sons, Goldsmiths and Silversmiths, will today make a presentation to the City of Newcastle. The House of Reids was founded in 1778 by Christian Ker Reid, whose first place of business was close to St. Nicholas Cathedral. To-day the establishments are well known in Blackett Street and Grainger Street. The silver presented to the collection at the Mansion House is a circular tray with pieced silver border of the well known Lindisfarne Decoration. The hall-mark bears the special mark issued for Coronation year and will add a note of great interest to the Collection already there. The presentation will be made at the Mansion House to the Lord Mayor, Alderman William McKeag by Mr. Percival Langford, chairman and managing director of Reid and Sons and the silver bears the engraved Coat-of-Arms of the City of Newcastle-upon-Tyne, and the following inscription:- "This Lindisfarne Silver was presented to the Corporation of Newcastle-upon-Tyne by Reid & Sons, Goldsmiths of this City in commemoration of Coronation Year and also to celebrate the 175th Anniversary of their foundation in 1778. - Alderman William McKeag, Lord Mayor, 1953-54."

THE NORTHERN OUTLOOK by ELDON

I was interested to read the other day that Reid and Sons, the Newcastle jewellers, possess a poster dated October 16, 1834 of a sale they had at their Dean Street shop about the time of the death of the founder of the business, Mr. Christian Ker Reid.

In 1914 the late Mr. C. Leo Reid presented to me a copy of his beautifully printed and illustrated book giving the family pedigree of the Kers, the Ker-Reids and an account of the founding of Reid and Sons, together with the coming to Newcastle from Edinburgh in 1778 of Christian Ker Reid, who established the firm of goldsmiths in our midst.

The Kers were a very old Border family, and the Reids came from Scotland. Estates from the Kers passed to Christian Ker Reid, who founded the firm that exists today.

Probably throughout the North of England there is no family connected with the goldsmith and silversmith trade that has so great a unbroken record as that of the Reid family. Indeed few businesses may be able to show the uninterrupted descent from father to son as was possible when Mr. Leo Reid compiled his valuable record.

Seven of the Reids were, at one time or another, Wardens of the local Goldsmiths Hall, our city being one of the few places that was granted in the older time a royal charter for the assaying and stamping of gold and silver plate. Examples of the work and mark of Christian Ker Reid: A MAN CHARGED WITH VARIOUS ROBBERIES

At North London Police court on Thursday John Moore, alias Hennessy, 37, jeweller, Hornsey, was charged on remand with stealing £400 worth of jewellery from a shop at Gravesend, and £3,000 worth from the premises of Reid and Sons, jewellers, Newcastle. A further charge was now preferred against accused of stealing a bag, containing £3,000 worth of jewellery, belonging to a traveller of Henry Griffiths, wholesale jewellers, of Birmingham. Witnesses on Thursday identified certain jewellery found in the possession of the prisoner. Of this jewellery £50 worth was the proceeds of the Gravesend burglary, and another £50 worth the proceeds of the Newcastle coup. Frederick Burgess, traveller to Griffiths and Son, Birmingham, deposed, with reference to the third charge, that the bag was stolen at Lime-street Station, Liverpool. He had placed it down while sending a telegram, and had put his foot on it. He had occasion to move for a moment, and when he went to put his foot on the bag again it had disappeared. Witness now identified jewellery to the value of £300 as part of the contents of the bag. Roben Brilliant, a jeweller, of Stoke Newington, who purchased the above lot from prisoner for £140, said when he discovered Griffiths's initials on it he informed the police. Prisoner was committed for trial for stealing and receiving the property actually recovered.

A pair of fish servers by Martin, Hall & Co., assayed at Sheffield in 1910, retailed by Reid & Sons: The Newcastle detectives at midnight on Friday smartly arrested several Chilians lodging in the city for the robbery of £2,500 worth of jewellery from Reid and Sons' establishment, Newcastle, on Saturday last. The greater part of the property has been secured.