Hi - Does anyone know what this item is? It is 2 left hands joined by a length of ribbon. The wedding finger on each hand has a ring and there is a serpent bangle around each wrist. Total length including ribbon and hands is 15 inches. The hands are 1.5 inches long. The hands are made from unmarked silver. I guess it dates from around 1900. Many thanks. John

The Victorian era brought snake jewellery into the limelight after Prince Albert proposed to Queen Victoria with a ring in the image of a snake featuring an emerald-set head. The Queen pronounced the snake to be a figure of eternal love. Reaching eminence in the 1840s, the serpent represented eternity and wisdom during this period and was a widespread motif on brooches, pendants, rings, bracelets and all sorts of ornamental accessories.

Yes, I believe JayT got it. Ribbon bookmark it is. 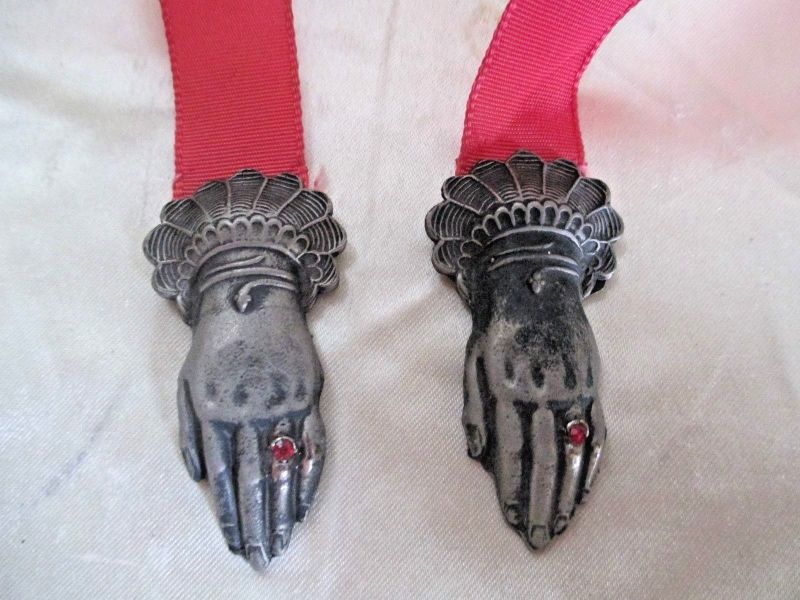 This Victorian bookmark was found in a old Hymnal book. The ribbon is in very good condition but does have some fading about 7 1/2" from being kept in the book. The length of the ribbon is 16 1/2" long x 5/8". The hands are marked silver plate and measure 1 7/8" x 7/8". The hands have a big lace cuff with a snake bracelet and red stones in the ring. They are attached to the red ribbon on opposite sides. The hands have patina and the thread on one side to attach the hand has come undone.
Top

Is it not used in as a symbolic binding togather of two newly weds, by tying together their left wrists?

Thanks All. Wonderful quick result !!

A bookmark with lots of symbolism and maybe has more meaning than a purely functional bookmark. Mourning? or as Martin suggests, love?

I'm trying to upload my image of a very realistic hand grasping a baton with black enamel details :: It is part of an "Etruscan Revival" 14k gold pocket-watch chain, most likely made at some point between 1860 and 1880 ::: I think the "realistic hand" motif was just in style during this period of time for reasons I have yet to figure out, probably just another feature of the "aesthetic movement" in America would be my best guess ::::
Top

Interesting thought, thanks Aguest. I think the dates you give are about right for my 'hands'. John
Top

"The resulting "nativist" movement, which achieved prominence in the 1840s, was whipped into a frenzy of anti-Catholicism that led to mob violence, the burning of Catholic property, and the killing of Catholics. This violence was fed by claims that Catholics were destroying the culture of the United States. Irish Catholic immigrants were blamed for spreading violence and drunkenness.

The nativist movement found expression in a national political movement called the Know-Nothing Party of the 1850s, which (unsuccessfully) ran former president Millard Fillmore as its presidential candidate in 1856."

So this is just my theory that the hands are a symbol of Catholic faith at a time when showing an obvious belonging to the Catholic church could have brought danger to the owner of the hands due to the "nativist" movement which was influencing American culture during this time :::::
Top
Post Reply
10 posts • Page 1 of 1