by paulh
I have just acquired this rather strange for. It is silver plated, by Henry Fielding of Birmingham. It is table fork size The head has short sharp tines and is quite deeply dished. It also has an odd oval hole before the wings on the shaft. The close up picture shows evidence of knife cut marks.

I could speculate forever what it may be for, but if anyone would care to give an opinion or even better a definite identification it would be very much appreciated. 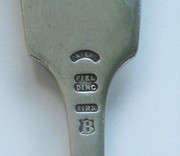 Surely the most inefficient masher ever invented! It must be a rare piece, I cannot see that it sold in great numbers.

by paulh
Hello Trev,
Thanks for plumbing the depths of your library. I would not have thought of a masher. The bend in the bowl is just not deep enough to get any real mashing action going. Also it is of such a size that it would be difficult to tackle anything bigger than a pea! I suppose a good soft potato in gravy would mash under the bowl and possibly even squirt up through the hole.I will try it out but I don't hold out much hope. Maybe I will film the experiment and be the next Youtube sensation!

by paulh
I tried it and it is absolutely useless. I hope that the one I have is a prototype because I cannot believe that they would put such a useless article into full production.
All times are UTC-04:00
Page 1 of 1
Powered by phpBB® Forum Software © phpBB Limited
https://www.phpbb.com/