Hopefully Dognose won't kick this off too quickly.... I have no idea where else I might even start but on this forum, I find there's many people on that know a little bit about EVERYTHING!

4.5x2.5 inches... "looks like" slag glass. Hand faceted, and a maker's mark (a symbol of sorts actually) on the bottom corner. Does anyone out there recognize the symbol? maker? What to call said item? as glass goes? I assume it's an ashtray unless I'm told otherwise.

Hopefully Dognose won't kick this off too quickly....

Originally produced by Heinrich Hoffmann and Henry G. Schlevogt.
A multi-coloured brochure “Czech It Out Inc.” (C.I.O.), Brooklyn, New York, from 2001 promoted reproductions of this famous glass from the 1930s in Czchechoslovakia.To distinguish between a reproduction from C.I.O. and an original glass one would need to keep both items in his hands close together, to compare colour and precision of pressing. Some of the press moulds from C.I.O. were made by casting moulds from original glass, so the pressed figurines or flowers became blurred. Sold to tourists in Prague, Liberec and Jablonec nad Nisou as cheap but beautiful souvenirs - like those poor quality copies which were produced in the years from 1948 to 1990 when Czechoslovakia badly needed hard currency.
Top

Ha ha! Thanks Trev for letting me stick around on this and thanks to the other posters for the help w/id!

It's a very nice piece and quite detailed. I've known of/seen repros of pressed glass items before but I can say for sure the "cutting" (faceting) is genuine, very clean... not reproduced from an original item. I like it in any event and plan to keep it... thanks for the help!

So now, searching this particular item... I find NONE that are faceted! Leads me to believe mine might be a copy as noted in AG20212's post. This one I found (below) in fact, looks to have more detail of, the... "backside" of (presumably) the female figure! 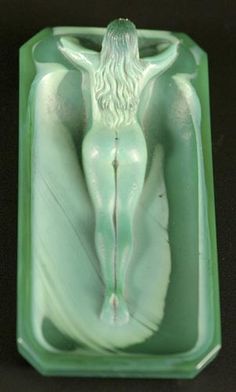