Hello Everyone.
Could anybody tell me what this is, and what it says on it.
It has two holes on each side, so I'm thinking possibly a string went through it, to then be worn.
Measures approx. 2 inches diameter.
I appreciate any info. Thanks. Those are not silver marks.
Top

Hello. The item is silver, I had it tested some time ago. I'm just wondering what it says, and what it was used as. Thanks.
Top

Maybe so, maybe not, but those still are not silver marks.

Perhaps an admin can move it to the "Mystery Objects" section where someone will recognize what this item-with-two-holes-on-each-side-possibly-to-be-worn is.

And perhaps the OP can engage the services of a professional translator and share the results with the Forum.
Top

Part of a clock pendulum.

It could be a pendulum bob, or weight, the pendulum rod goes through the holes. 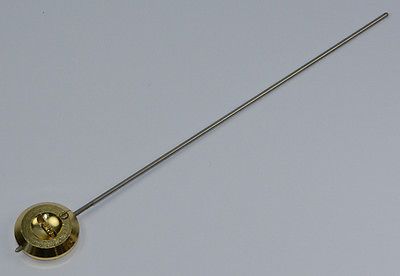 it could be a simple netsuke. Though in form it would be early 1800's the kanji appears to be stamped.
Top

Thank you both for your time and the information.

I got this information recently when I contacted an auction house:

Thank you for this. I don't know much about this. It doesn't look like an art object but more like an instrument.
If it was art work, I can tell you more about it. IT is Japanese, 20th century and signed by Hayashi (says Hayashi sei) and the patent number.
I would say it is some kind of insrument as it has a patent.
I am sorry this is the only thing I can tell you.
Top

As everyone now knows, the writing definitely does not say anything like "silver," and the one I have seen for sale in Japan made no mention of silver but describes said item as "metal." Maybe an instance of extreme understatement on the part of a humble seller......

Very interesting guesses so far, but I am afraid no one is close yet to the intended purpose of this item.

Let's see if anyone wants to take another try at it.
Top

Could you please help us out of our misery and reveal the true purpose of the item?

My apologies, I didn't know that misery had set in.

It is the swinging lid that belonged to an ashtray.

The Hayashi ashtray I have seen was one component of a smoking set, that is, a portable wooden box with handles that contained a small mass-produced porcelain hibachi, a match holder, and the metal ashtray, all of which were fitted into compartments of the box. The box could be hauled hither and thither wherever smokers might go. Hayashi smoking sets were factory-packed two units to a storage box, so it is safe to assume that Hayashi was the man who solved one of humanity's great riddles and "built the better ashtray," then proceeded to market it as part of a complete smoking set. One can only imagine the sad lot of the scullery maids who had to set these out every night, and empty them every morning, at plebeian inns and teahouses all over Japan.

I can hardly reiterate in strong enough terms that the likelihood of this ashtray lid being silver is close to nil. For one thing, the two I have seen for sale, which had lids marked identically to the one posted here, described the metal parts as "rusty." For another, this ashtray was mass-produced and marketed to the masses domestically. And for a third, I cannot imagine venerable Hayashi-sama leaving "pure silver" or even "silver plate" off of his brilliant invention while stamping on his name and patent number for all the world to smash their butts upon.

All clear, thank you very much.