I thought I'd see if anyone recognized this mark - thought I had a lead on it at one time, but I can't find my notes. The name is obviously challenging to research via google, and not much luck in the genealogical databases. Thanks! 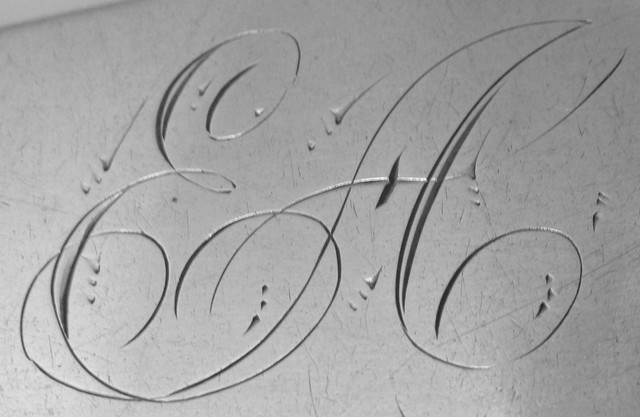 The one name I can find that comes close is Sidney Utley Main. However, the only occupations that I can find for him are peddler and druggist. He was born in 1811 and died in 1893. His working life appears to have been spent in Batavia, New York. HIs 1870 real estate value was $18,000.00 and his personal estate value was $10,000.00. Family history points out that he died a wealthy man and left most of his estate to the church because his wife and children past away before him. He did leave college tuition to a nephew of the same name as his.
Top

That’s a great lead; thank you!

Sidney U. Main, a retired merchant, was an active business man for many years. He was born in Cazenovia, N. Y., in 1811, a son of William and Sophia (Briggs) Main, of New England stock. They were married there and settled in Madison County in 1829, whence they removed to Bennington, Wyoming County. The father was a merchant and farmer there until his death in 1838. The mother died in 1877, at the home of her son in Batavia. There were eight children, six of whom are living, viz.: Mrs. Jane C. Bride, Mrs. Lucy A. Studley, Mrs. Caroline L. Dorman, Mrs. Margaret Hulett, Mrs. Louisa Shadbolt, and Sidney U. Main. The latter bc.gan his business career when a youth, and pursued it untiringly until he retired from active labor. He was for some time a traveling salesman. In 1837 he began business in Bergen, continuing there until he came to Batavia. In 1854 he formed a copartnership with Dr O, P. Clark in the drug and book trade, and was afterwards associated with A. D. Tryon. He was also in business in Randolph, N. Y., for 20 years, and was a large real estate dealer. Throughout his entire business life he sustained a reputation for honorable dealing. In 1837 he married Miss Ophelia Beecher, of Bergen, who died in 1844. In 1849 he married Adeline E. Botsford, who died in 1851. In 1854 he was married to Adeline E., daughter of Aaron and Betsey (Bent) Pingrey, of Mount Holly, Vermont, who were early settlers of Cattaraugus County, N. Y.