This Monogram seems to share a similar "Flourish" style which I have seen on an archived Tankard and also the signature of Liberty Brown(e) himself... 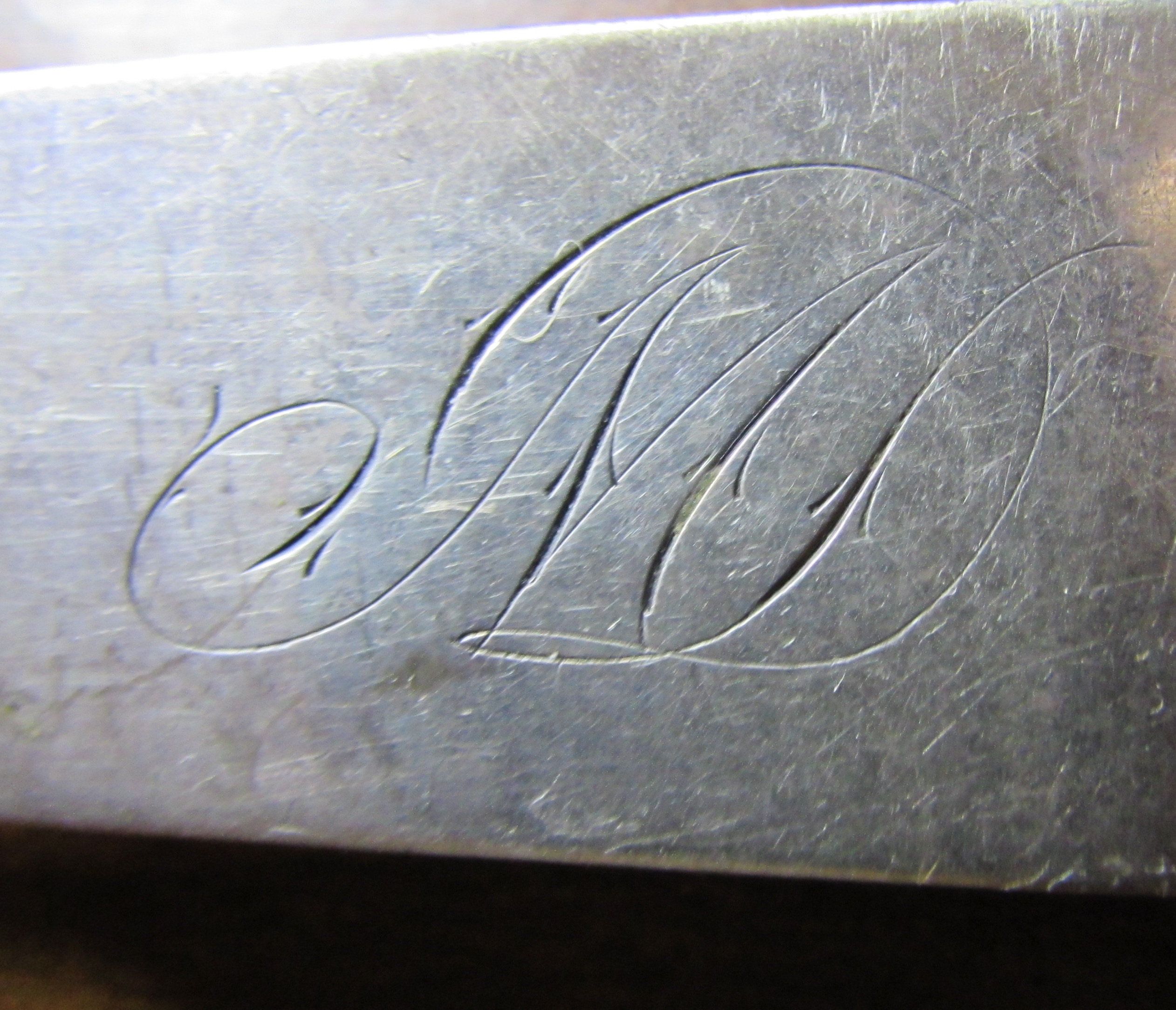 I have not seen an alternate hallmark without the "e" but I have seen the name spelled both ways in the literature, and also I really can't find another possibility of a "Brown" with the first initial being "L" so I really can't consider any other silversmiths. ::: I have never seen a spoon by Liberty Brown, but this spoon does seem later in his career, perhaps 1825-1830, stylistically it seems to me to be from that period.... 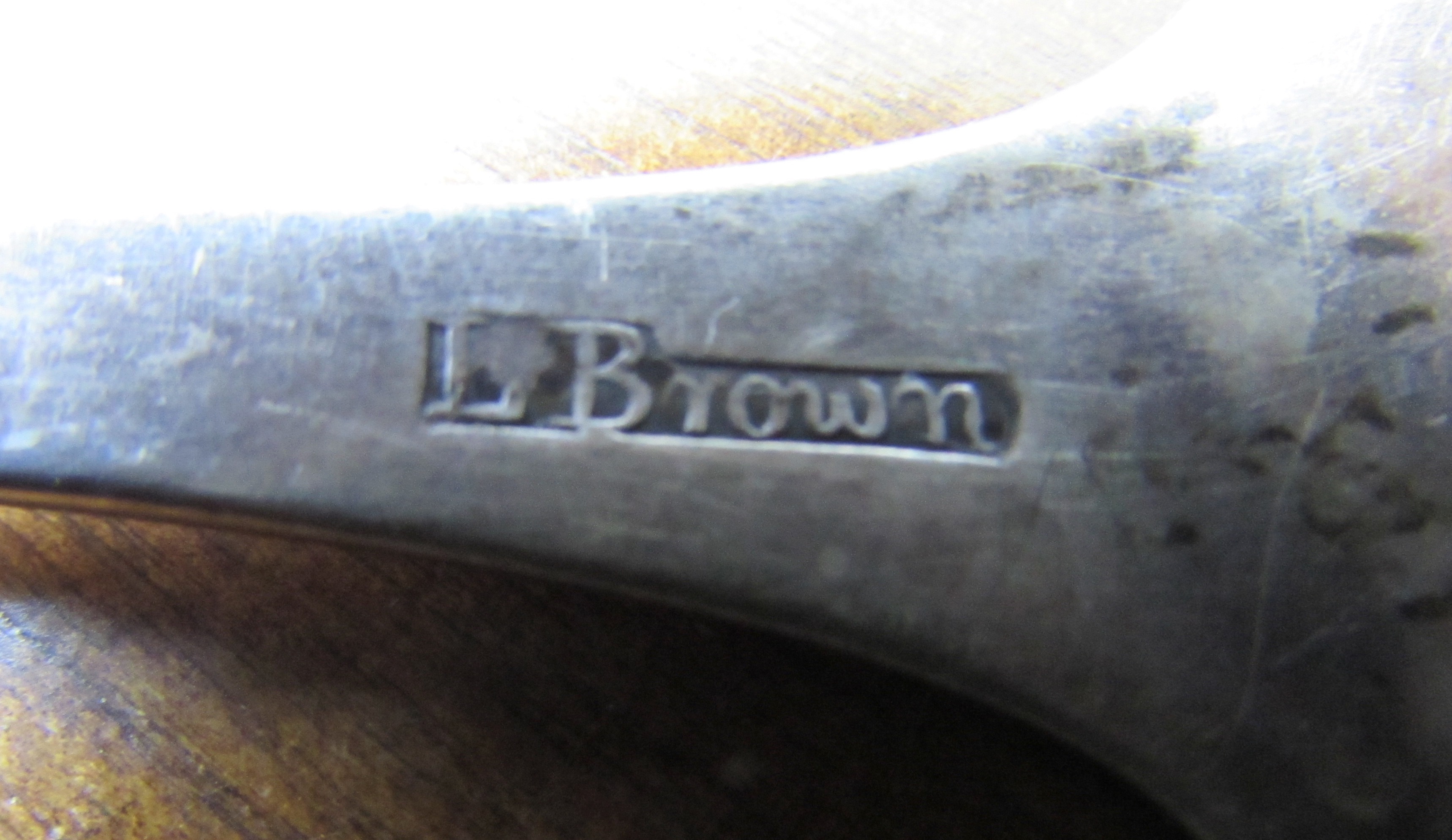 "Brown (Browne), Liberty, Phila. A black silversmith known to have made gold hilts for swords presented by the Commonwealth of Pennsylvania during the War of 1812. Began as Brown & Houlton (John) in Baltimore about 1799. Brown was in Philadelphia by 1801. In 1810 the firm was Brown & Seal (William) thru 1811. Liberty Brown continued on his own thru at least 1813. (Louise Belden:Marks of American Silversmiths in the Inneson-Bissell Collection, p.81.)"

Other information I have come across has Brown & Seal continuing through 1815. ::: However, seeing as how Liberty Browne passed away in 1831, would it not make sense that he continued on his own for longer than 1813-1815? The form of this spoon may be earlier than I thought, perhaps 1815-1820, and after he worked for Brown & Seal and continued on his own, he would have had to make a new punch for himself in order to hallmark his silver after his partnership as Brown & Seal ::: All this is somewhat speculative, but it's the best scenario I can come up with at this point in time. :::
Top

If you look at documents with Liberty Browne's signature, the "r o w n" letters are very similar to the letters in the hallmark on my spoon. ::: Liberty Browne was appointed the head of a Philadelphia Council and became a tax collector in 1813. ::: That's all the information I have about him until his death in 1831, having survived the death of his wife by several years. :::

Is it reasonable to think that Liberty Brown would not even have made the simplest of silver items during the years 1815-1830? ::: Not even a single spoon? ::: I find that difficult to believe that such a talented artist would completely give up silversmithing for these years, Belden suggests he continued on after his partnership ended (the exact year seems to vary from 1811 to 1815 but somewhere around those years) but it seems that no evidence has been uncovered of his work after his partnership.......until now!!!! (maybe?). ::::
Top

Just based on the sheer number of unknown and undocumented silver marks - I am inclined to think this is probably someone else. Close only counts in horseshoes.
Top

Why would Belden spell the two names differently if there were no hallmark for "L. Brown" attributed to "Liberty Brown"? ::: That's a bit strange since all the hallmarks I have found are spelled "Browne" and this is the first "Brown" I have ever come across. :::

Maybe when he became a tax collector he decided to drop the "e" because some silver-buyers might recognize the name and associate him with tax collection?
Top

(This is the hallmark with the "squiggle" I was talking about, perhaps it is just an extremely crisp version of the slightly worn down hallmark above)
Top

I personally don't think the L is exact. They may have used the same font but it is slightly different, especially at the top of the L for Browne.
Top

The "construction of the L" with a uniquely-shaped appendage at the far-right of the "L" is what I think is extremely similar, they both have a slightly triangular shaped appendage pointing upwards towards the pellet. :::: And I am certain my hallmark has a pellet as well, checked with a 30X loupe. ::
Top

I was looking at a fancy auction house's previous auction for Brown and Houlton and it implies significant rarity of some of Liberty Browne's silver. :::

"J. Hall Pleasants' and Howard Sill's book Maryland Silversmiths 1715-1830 notes that at the time of publication: '"No silver by Brown and Houlton has been seen."'

We could simply be filling in an alternate hallmark for Liberty Brown and based on the form you would have to say 1815-1820 and since Liberty Brown was assumed to be active during this time and given the circumstantial evidence (similarities of letters and monograms between pieces), I really feel comfortable in tentatively attributing this piece to Liberty Brown. ::
Top

I may have come across some information that points away from Liberty Browne:

See Rochester Museum of Arts and Sciences - Silversmiths of Rochester

L. Brown
Rochester directory 1838 lists him as a silversmith

where indeed you will find an entry for an L. Brown on page 29 (actually page 13 of the PDF):

There is also an entry for a Levi Brown of Detroit in this thesis on page 75 (actually page 82 of the PDF):

The Silversmiths of Old Detroit

Although none of Brown's marked work is known today, his closeness to Chauncy S. Payne, who was a silversmith, would lead one to believe that Brown did deal in at least silver tableware although he seems to have been mainly concerned with clocks and watches and probably was not a working silversmith.

This suggests there could be tableware with Levi Brown's retailer mark c1826-?
Top

Thank you for the information. ::: Was your search comprehensive such that you believe you have narrowed it down to a choice of three possibilities? ::: Thanks. again. :::
Top

The results popped up after a few targeted searches on Google.

Since it is known that there were a large number of silversmiths working in New York, I entered the following search which yielded the L. Brown of Rochester result:

Needless to say there are many more combinations of keywords you could try so I wouldn't consider this to be an exhaustive search yet. It's certainly possible that further searching will not yield any more results.
Top

Found the mark in "Marks of Early American Silversmiths"

Considering the mark would have appeared on the previous page if placed in alphabetical order, it seems to be implying a possible attribution to Liberty Browne:

Another result, this image showing the same mark but drawn with an "e" at the end.

The marks found in the above references are similar, but a closer examination reveals some differences.


Your mark is more similar to the one documented in "Marks of Early American Silversmiths" shown below on the left:

The last letter "n" has a tiny upward stroke at the very end, I realize my pic makes that last upward stroke difficult to see. ::: Thanks for this info. :::
Top
Post Reply
19 posts • Page 1 of 1