This is a Persian (Iranian) cigarette case which comes from the estate of a pilot who appeared to have traveled extensively throughout Iran in the 1970's prior to the revolution.

It is unmarked but it was tested with a bench top XRF (Thermofisher Niton DXL) and came back as 87.5% Ag with the balance being Cu and some trace elements. 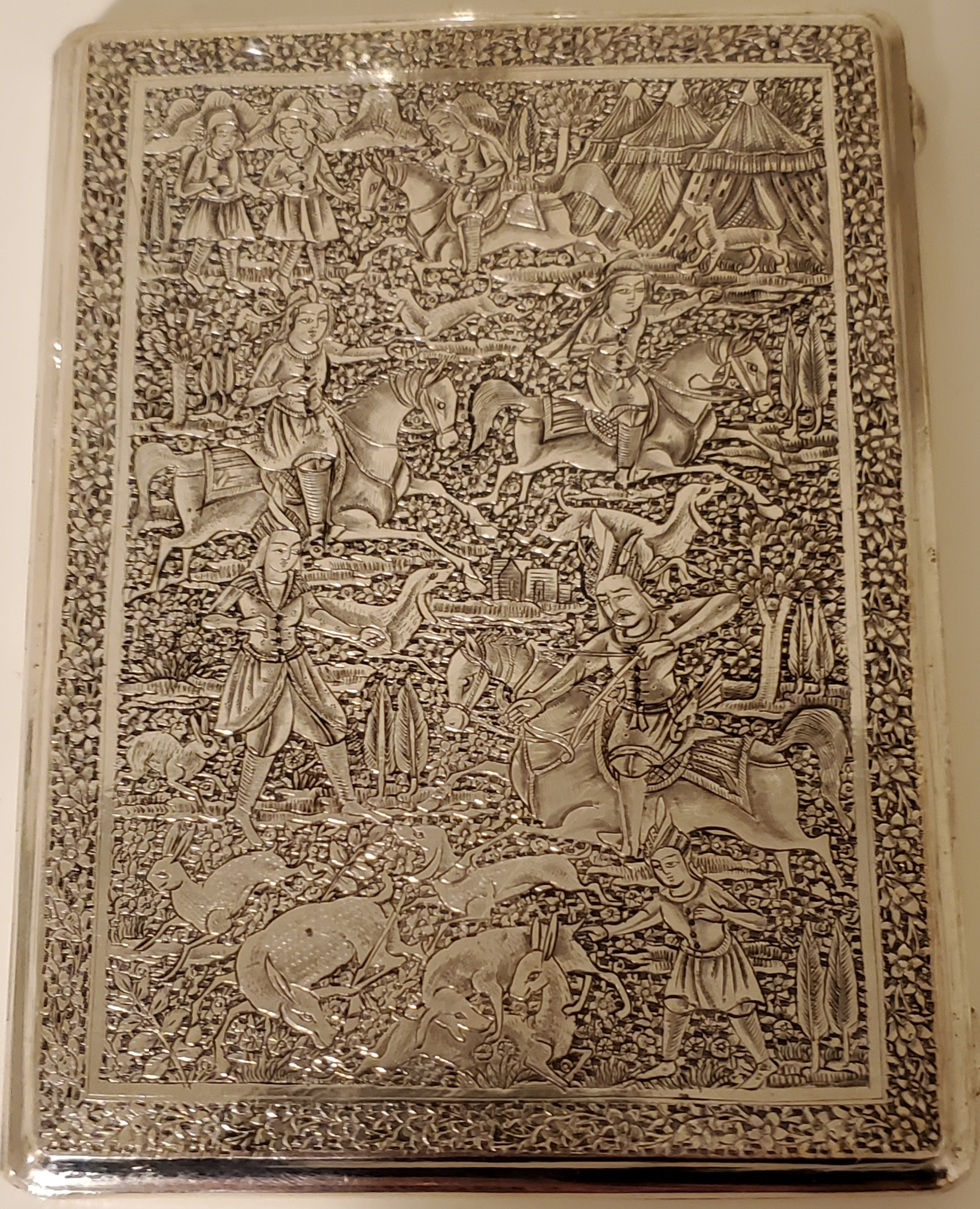 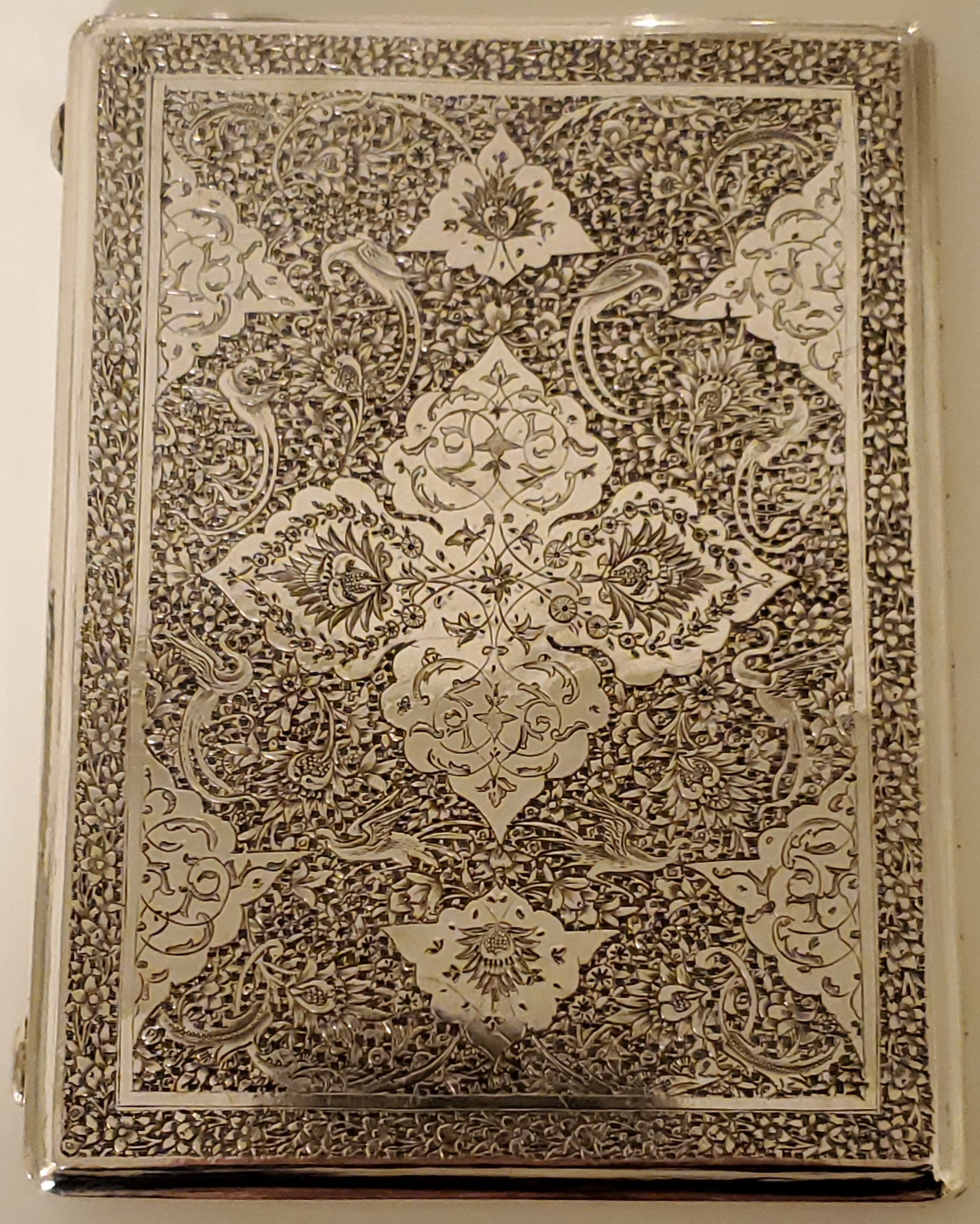 If you look on the inside of the cigarette case, do you see any small hallmarks, or any marks at all? You should see the number "84" which corresponds to 87.5 percent fineness, which means the measuring equipment and the silversmith are both exactly correct. The detail on this cigarette case is higher than usual, and it might be the highest quality work I have ever seen on a Persian cigarette case. There are large trays which rival this level of detail, I believe they were made for very powerful people who chose the commissioned the best silversmiths available. :::

With quality this high, I wonder why there are no hallmarks? Perhaps the quality of the item speaks for itself. :::
Top

Do you happen to know the dimensions of the case? :: If the case is around 3 inches in length, it would be a cigarette case :: However, if it is 5 or 6 inches in length, it could be a cigar case, I was just wondering about the dimensions of the case, this is quite a luxurious item indeed. :: I have been thinking about the shading on certain parts of the case, such as the horses for example, there is a technique of shading silver called "niello" which is a chemical reaction involving other base elements, and there is also a technique of shading silver called "acid etch" (perhaps search for "acid etched" silver to see other items which use this process), so I wonder exactly how the shading is accomplished on this case. :::

Seems larger to me, so it seems like a cigar case, but without measurements I cannot be absolutely certain. :
Top

The dimensions of the case are 3 1/2" x 4 3/4" so based on your description and with the way the elastic band is oriented, I think this would be a cigarette case. I think the presence of the elastic band would also indicate the piece was made somewhat more recently?

I went to a second shop thinking they had a handheld XRF that could analyze my larger pieces which didn't fit in the bench top XRF at the first shop (unfortunately there was a miscommunication and it turned out they had the same bench top model as the first shop). The second shop measured this again and it came in slightly higher at 88.1% Ag with the balance being Cu and 0.1% Pb. I am wondering if the difference was due to calibration, or if the surface is not perfectly homogeneous.

I zoomed in on one of the shaded areas of the horse, and the shading effect seems to be accomplished by a fine scoring of the surface. The grooves of the shaded areas retain some oxidation which contrasts with the higher smoother surfaces and the heavy oxidation of the background. The shading/contrast is more visible when the light is reflected at certain angles (such as in the first post).

For having such fine detail on the exterior, the interior is noticeably less refined and is quite rough near the perimeter of the case. As for markings, there doesn't appear to be an "84" marked anywhere, but there does appear to be traces of an inscription in one of the corners (although it also could be a series of random gouges that have the appearance of script?). 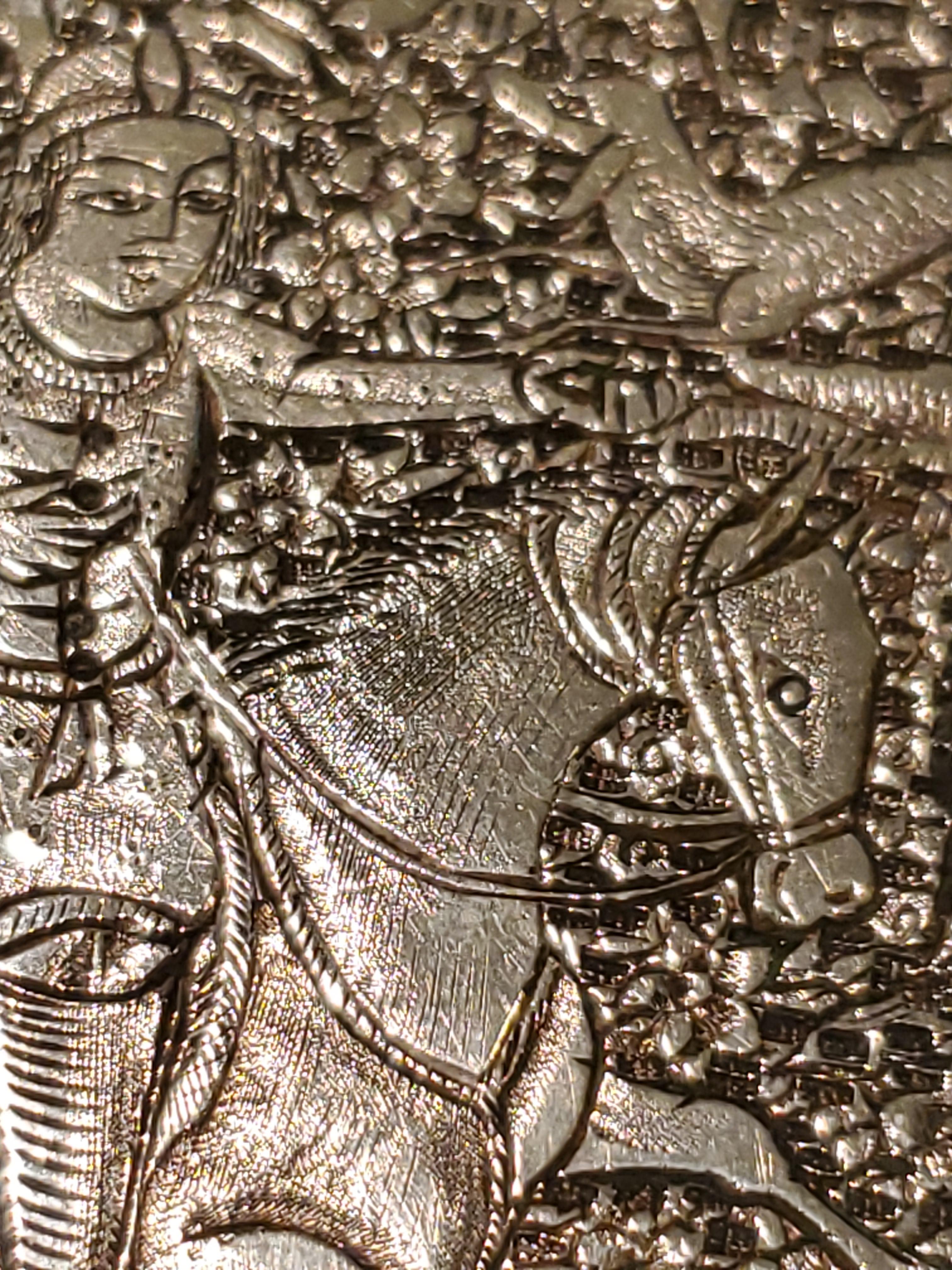 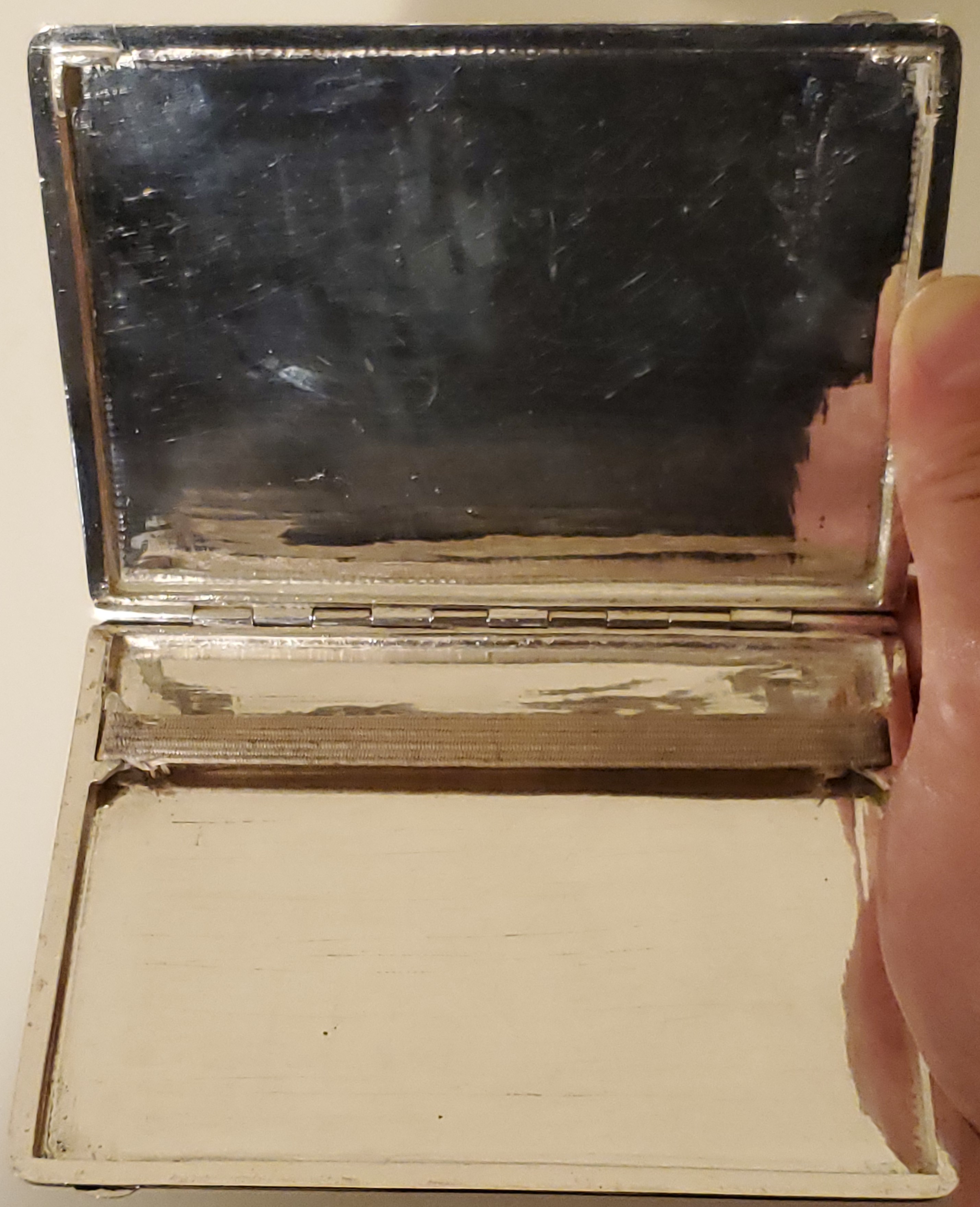 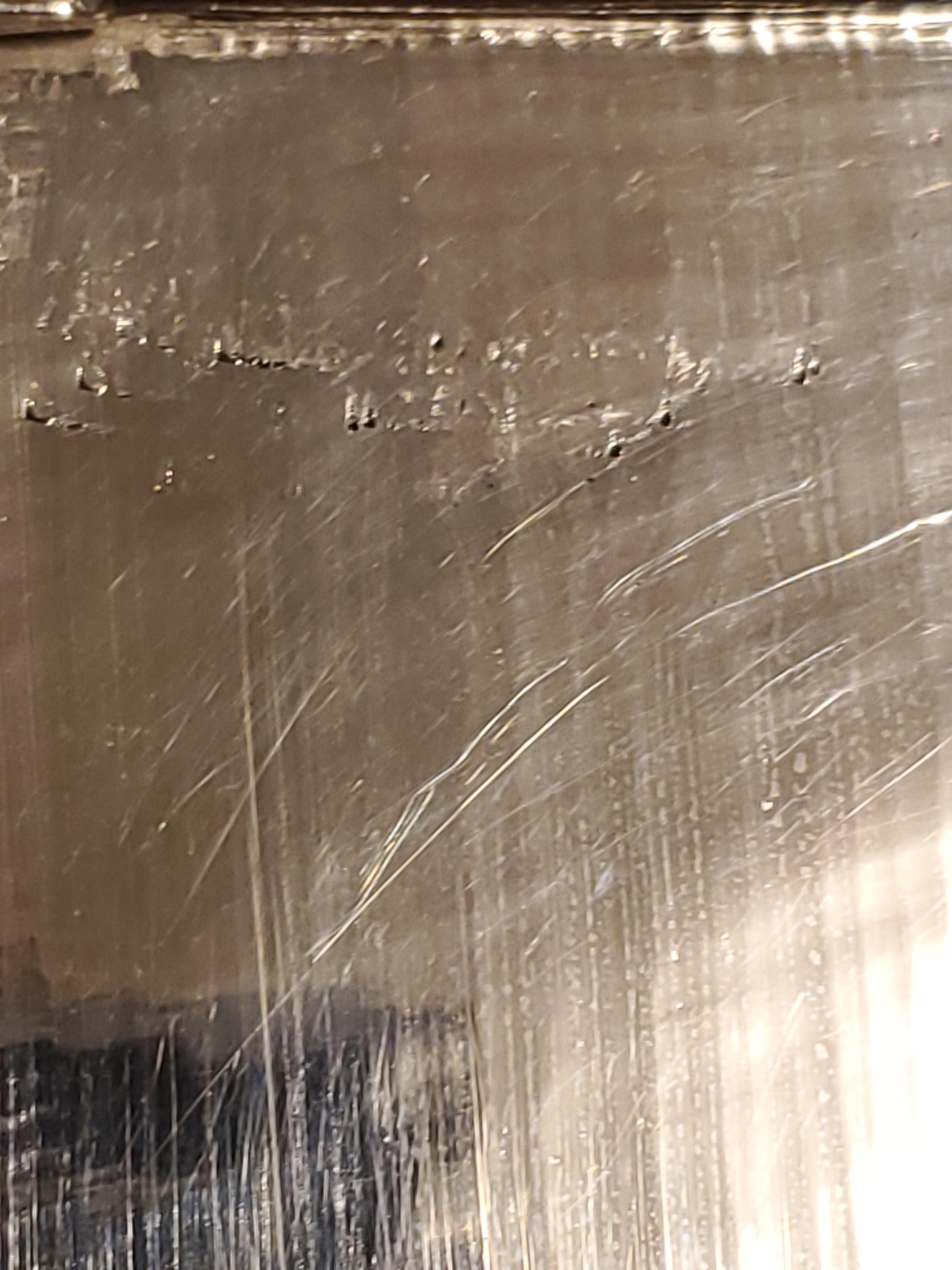 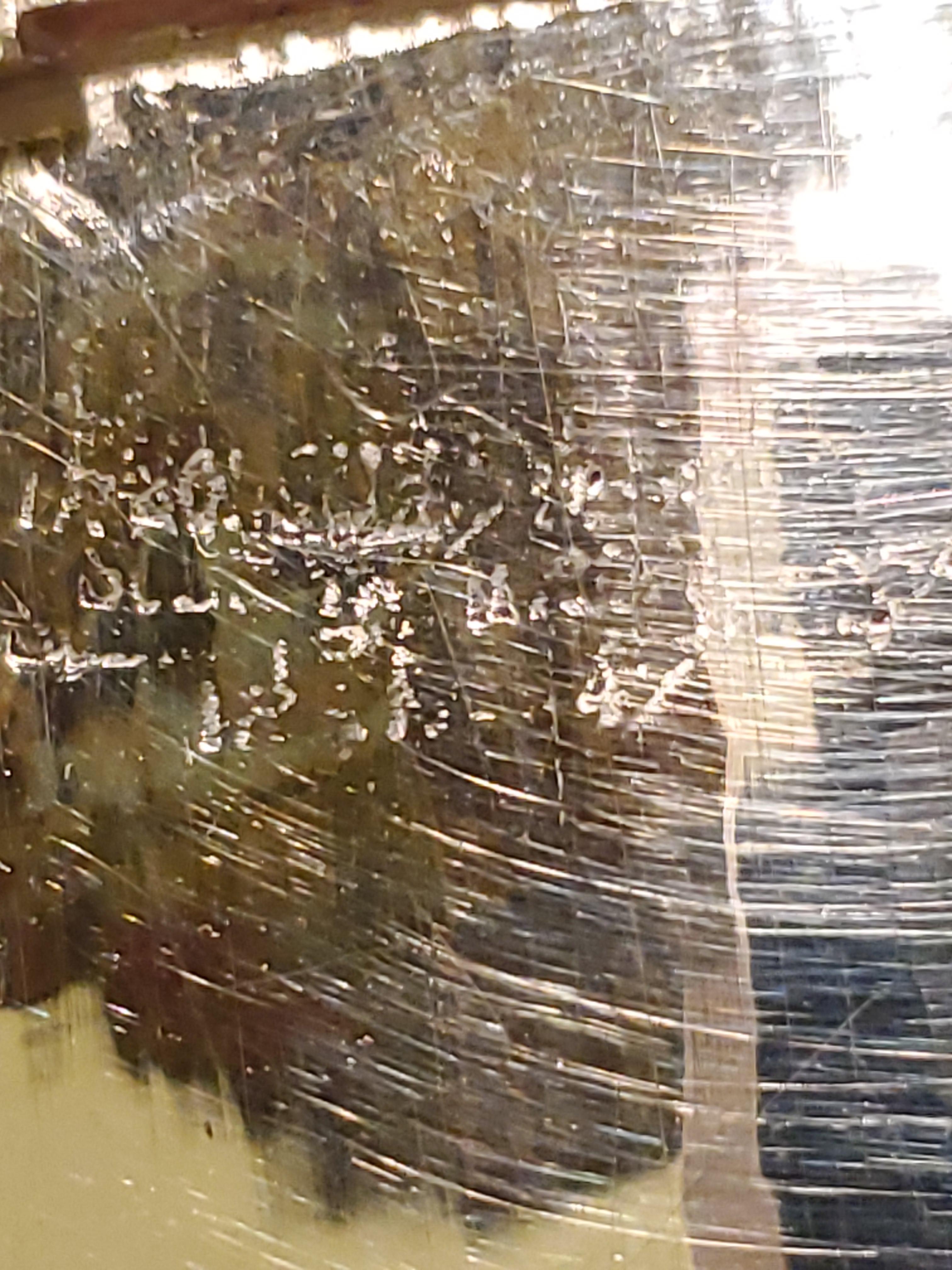 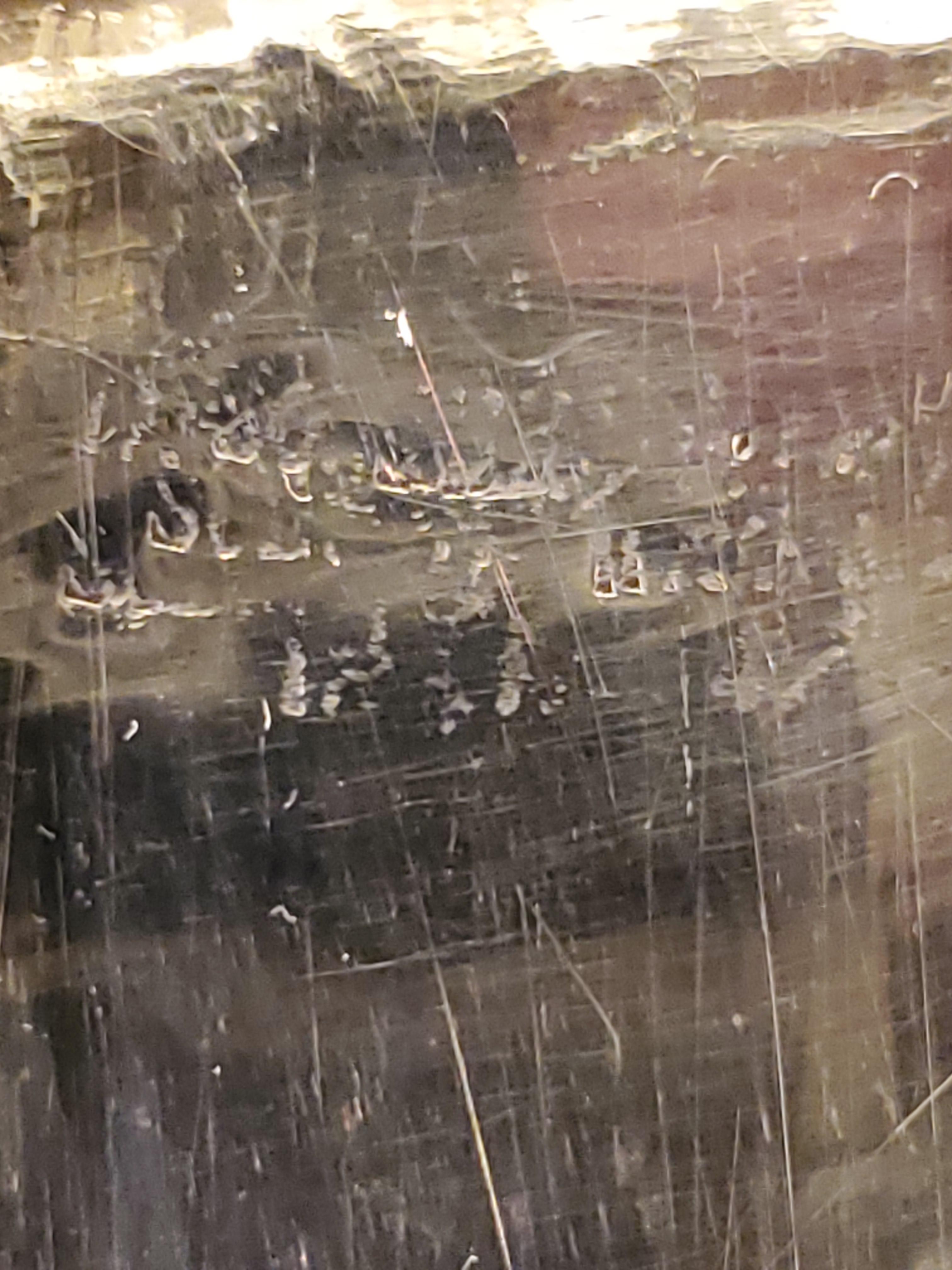 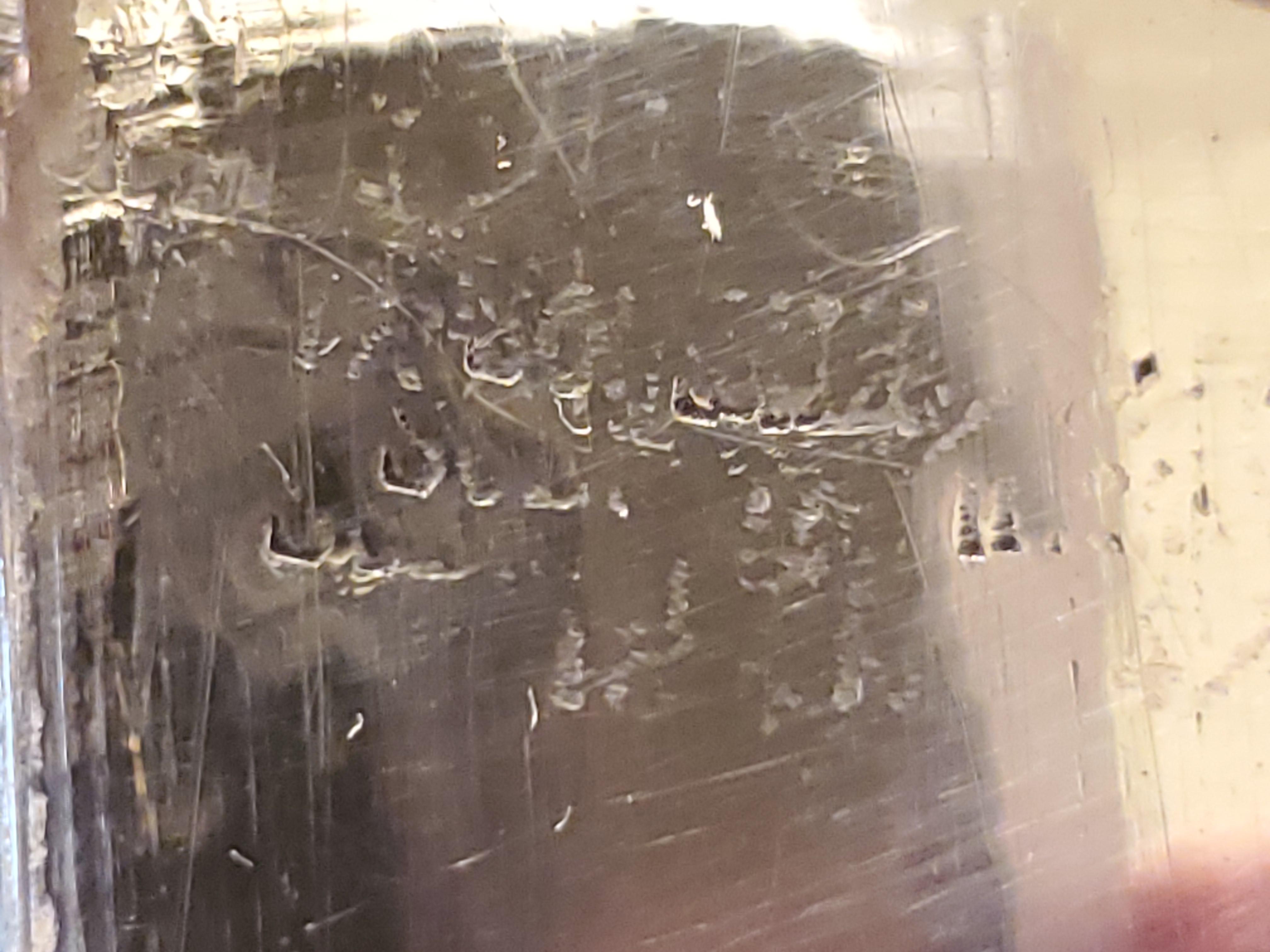 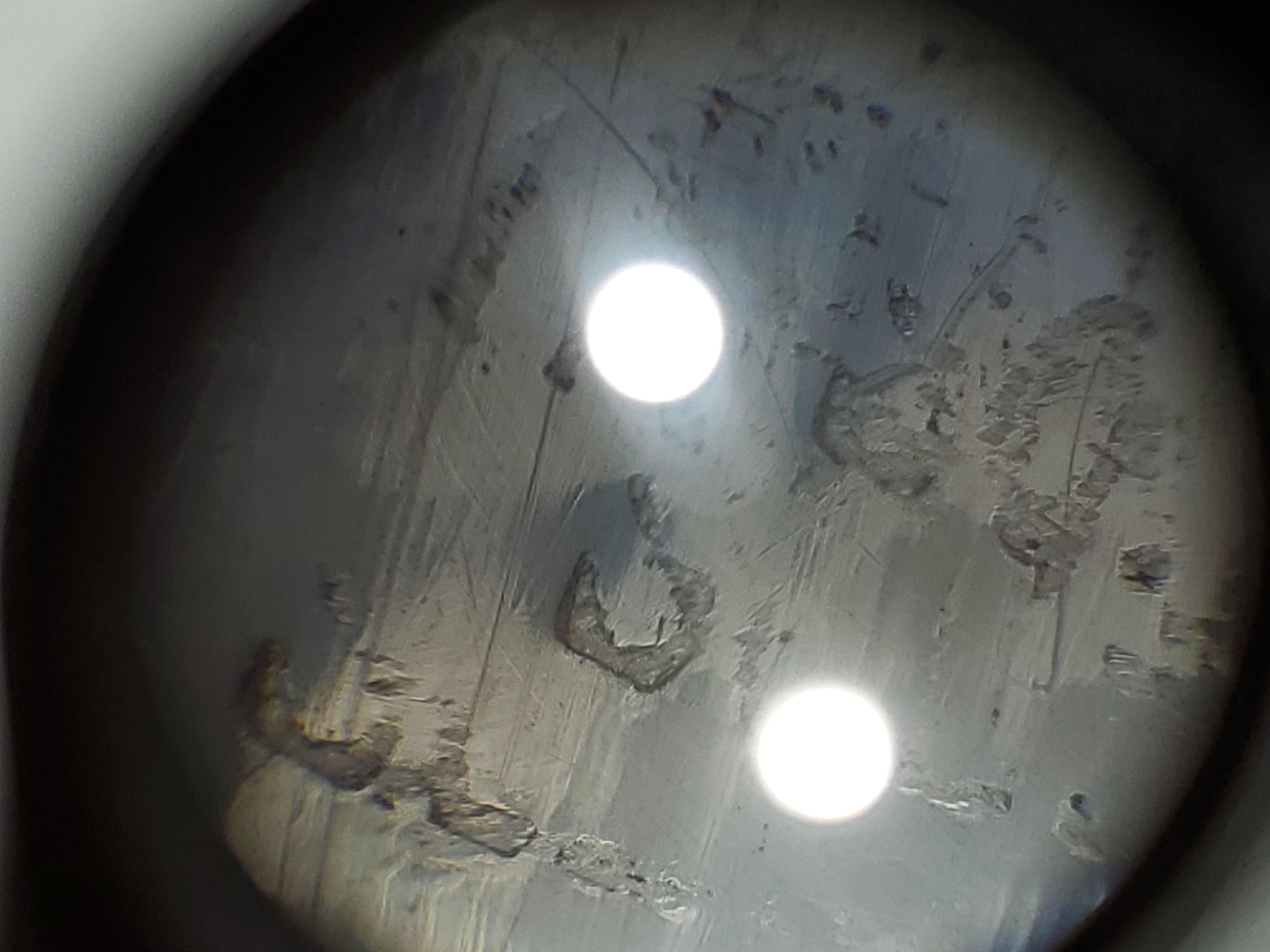 I should also add that both store owners explained to me that XRF analyzers can only penetrate a small distance past the surface (a few microns), and are routinely fooled by silver-plated items which have a layer of silver plating that is thicker than the depth of penetration.

I can't read the inscription, unfortunately, perhaps someone will be able to decipher it. ::: I'm almost positive this case is very close to sterling silver, I'm guessing that there is a slight difference between the machines due to slight errors in calibration, the fineness of 87.5% is to be expected. :: Silver-plating involves a process that binds silver ions on the surface of base metals (nickel, copper, zinc), and the more silver ions you use in the process, the brighter and shinier you can make the object appear; in Germany they used to make silver-plated objects with (30) or (60) or (90) and that refers to the number of grams of silver ions used during the silver-plating process. :::