I have a fairly small (15cm diam) handled dish with this mark. I can't find anything on this database, can anyone help?

It appears to be a 4 leaf clover with letters SFMO clockwise from top.

Many thanks for any clues 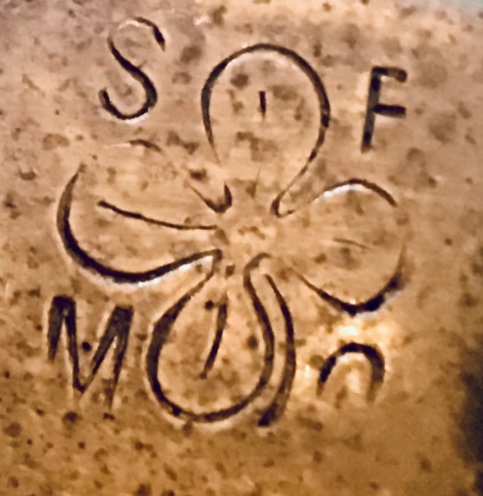 In a case like this it might be best to show the whole object as details can help point toward origins and eras. Now, your F could be a partially marked P, and the O could similarly be a C. Personally, I would start the clockwise count from the first leaf, thus giving M.S.P.C., which might read as the M. Silver Plate Company. Oddly enough, Rainwater lists a name that might fit, but this here would not be a mark shown for them. The clover was used by some other makers to boot so it was kind of an up-for-grabs symbol. Again, more photos might reveal something.
Top

Strangely, yesterday I came across an old plated serving spoon having a beaded-edge handle with a floral (roses?) decor near the tip. The only mark was a poorly stamped clover like the example here, but without any letters...the stem curves as above so we can rule out some other known clover marks with straight stems.
Top
Post Reply
3 posts • Page 1 of 1