Hello I noted the spoon marks shown below on line a short while ago. I am not from Walsall but I have been there on many occasions and was intrigued to know a little bit more about these finial marks.
Walsall is not far from Birmingham in England’s Midlands but John Stirling does not appear to be an electroplate cutlery manufacturer so the marks are likely are for the retailer. There is a reference to a John Stirling a jeweller at Park Street Walsall in 1894. The reference adds that Stirlings the Jewellers were known as the “wedding ring shop” and founded in 1893 but moved from Park Street to the Arcade, also in Walsall. This was in 1924 by which time John Stirling’s daughter had taken over the business. The “Stirling” name is still trading at the Arcade as a jewellery retailer. I hope this can be a useful reference for this trademark section.
Yours
Fishless

Thanks for posting this topic.

To my knowledge it was the custom at the time that when a couple purchased their wedding ring, the jeweller made them a gift of half-a-dozen teaspoons in the hope that the couple would make further purchases of flatware from them. The jeweller's name on the spoons would be a constant reminder of the gift. These spoons were perhaps supplied free of charge to the jeweller by the big plating companies in return for a certain size order.

Here's another couple of examples: It would be interesting to see further examples of such spoons.

Hello again I had a look on line for some more details on some of Dognose’s pictures. There seems to be information to be found on the “Taylor” of “Rochdale” silversmith. With a leap of faith the photo below could be that of the retailer’s shop.

The date of this photo is not known but the central large clock says “Established 70 years” and additionally there are references and a picture on line of a silver cased stopwatch hallmarked for London 1910 with “John Taylor Rochdale” printed on its enameled face.
Unfortunately there was less “stuff” online regarding a silversmith C Turnbull from Blyth, but there was on a “closed” horologists site, an apparent reference to a C. Turnbull of Blyth. Confusingly even to my knowledge there are 2 Blyths, one in central England and another, a port in the North East.
There is even less “stuff” that I could find on “A. Wood” of the very small town “Ramsbottom” in North West England.

P.s. I have some stuff nearly finished for posting on another retailer who surprisingly was based only a little more than 5 miles of Mr Wood.
Top

Great researching, thanks for sharing the information.

Hello again, again, I just had a few days away in Lancashire and of course found a few flea market stalls to look at. I bought the set of sugar tongs shown with their marks, illustrated in the photo below.

These tongs, unlike the spoons that Dognose has illustrated and briefly described, do not have any manufactures’ marks on just the “circle” featuring the name and address.
I assumed “H.W.Sly” was a local “Bury” in “Lancashire” retailer and so it seems from my research. I do not think 2 and 4 Haymarket Street now “exists” as it did previously. There is a bus station there.
I do not know the age of the set of tongs but I did find 2 bits of datable evidence for “Slys” shown from the next photos. The first from 1959 shows an active business in the late 1950’s and the second photo comes from an online “copy” of the Bury Grammar School booklet for their 1924 bazaar.

That picture indicates “H.W.Sly” as a well-established business in 1924 and I also found elsewhere an auction reference to a “Victorian 38 cm Schoolhouse Clock by H.W.Sly. Bury”. Are there any “clock” collectors that can help date the company?
Additionally after reviewing all the listed photos in this topic of the various retailers’ marks I wondered if the items of flatware were “pressed” with the retailers’ lettering on or did the items have those letters added afterwards, even by the retailers themselves? Were both those methods used? I know there were odd suggestions about this in topic.

Surely small provincial town jewellers/silversmiths are more likely to have marked their own items? Has anybody else got knowledge to add?

P.s The Bury Grammar school 1924 booklet that is listed online is well worth looking at as there are lots of commercial ads present giving a flavour of business in a small mid 1920’s Northern English town.
Top


H. W. SLY LIMITED
Notice is hereby given (pursuant to Section 290 of the Companies Act 1948) that a General Meeting of the above named Company will be held at 10 St. Mary's Place, Bury on 15th May 1975 at 11 o'clock in the forenoon precisely for the purpose of having an account laid before the Members and to receive the report of the Liquidator showing how the winding-up has been conducted and the property of the Company disposed of; of hearing any explanation that may be given by the Liquidator and also of determining by Extraordinary Resolution the manner in which the books, accounts, papers and documents of the Company and of the Liquidator shall be disposed of. Any Member entitled to attend and vote is entitled to appoint a proxy to attend and vote instead of him and such proxy need not also be a Member.—Dated 2nd April 1975.
P. Metcalfe, Liquidator

Hello, doing some research on a spoon from another Northern retailer I found this photo on line. This ad is said to have been taken from an 1888 business directory.

The ad clearly confirms Dognose’s earlier comment about jewellers giving teaspoons away when a wedding ring is bought. For anybody who does not know, Amble is a small harbour town in Northumberland.

Hello, my attention was attracted by the retailers mark that was present inside the arm of a pair of electroplated sugar tongs and it is pictured below.

It reads “R.Gilbert & Sons Ltd”, the “something” jewellers of “Coventry & Barrow”. We will sort the “something” out later. What intrigued me was the distance between the 2 towns mentioned. I know about 200 miles, is nothing compared to distances of say between towns in the USA. However outlets in1small town in Cumbria and a medium sized town 200 miles away in Warwickshire, Central England looks unusual. Initial searches with “Coventry” soon found this interesting postcard/trade card image.

I have tried to “improve” the script a little. R.Gilbert & Sons Ltd ‘s shop was in the “Bank Building, High Street” in Coventry. Below is a reference to more stuff on “Gilbert’s” Coventry premises.

It seems from the image above that Gilberts were the “City” jewellers and they gave a “useful present” with wedding rings bought just as we have seen that other jewellers did. There is no dating evidence though.
A little further research with “Barrow” lead to some horological references and 1 site gave 3 although there is more information only available for subscribing members. Here are the “Gilberts”.

The question is are all these different “R.Gilbert and Sons”, are they the same “R.Gilbert and Sons”, are they the same family with different “R.Gilberts” or even just a concern continuing a successful name?
More geography now, Dalton is a village very close to Barrow and the town of Carnforth is not far away in Lancashire and even in the mid 19th century there was a rail connection between that town and Barrow. This looks like an expanding family firm but still no evidence for a time line.
Below are some photos of “Gilbert” pocket watches and here we have the chance of dating the “Gilbert” business by the use the hallmarks on the silver or gold cases of their pocket watches. Following are some referenced Gilbert case hallmarks.

Face signed "R GILBERT& SONS BARROW & DALTON". The case is hallmarked for Chester with the letter "C" to indicate 1886. There is also a mark of C.H in a chamfered rectangle likely belonging to “Charles Harris” a Coventry based watchcase maker.

Movement is stamped “R. GILBERT & SONS, COVENTRY & BARROW” and the case has Chester hallmarks for 1900 with the case makers mark J.F

Face is marked "R GILBERT & SON LTD, COVENTRY AND BARROW”. The case is a Denisson (Handsworth, Birmingham) and hallmarked for 1915 the movement is by Williamson (Coventry).
I believe for this example the “Denisson” is miss-spelt and should refer to the “Dennison Watch Case Company”.

Although not conclusive there is the likely hood that “Gilberts” made their main base in Coventry around the final decade of the 19th century at a time when Coventry was regarded as one of the 3 biggest watch and clock making areas in Britain, ranking with Prescot near Liverpool and London’s Clerkenwell. On the “watch forum” from where some watch details came was a reply from a descendant of the Barrow Gilberts stating they believed the founder of the company was a “Richard Gilbert” who was born around 1848. This does however possibly contradict another watch reference that is shown below.

There are 2 obvious explanations for this early dated activity, first that the Gilbert movement was a replacement movement for an earlier cased watch or Gilberts came into being around the turn of the 19th century.
The actual date of the company’s birth may be for discussion but the “watch forum” suggested, that from the time of the 1st World War, the shortage of skilled workers lead to Gilberts becoming more of a Retailer than a watchmaker. Evidencing the use of somebody else’s movement in the 1915 watch for this.
The end of Gilberts was likely to have been in the early 1970’s when a Liquidator was appointed for the jewellers “R. Gilbert and Sons Limited.”
Finally regarding “Gilbert’s” claim as to be “Makers to the Admiralty”. Barrow was a shipbuilding and Naval port and ships and boats certainly needed accurate watches.
Fishless
Top

Hello again I was not clever enough to reference "Gilberts" in the way I thought I could. You may or may not need to search for "Gilbert" in this particular post.

Hello, I am sorry that the “Tinypics” change of conditions has stripped the “Gilbert’s of Coventry&Barrow” bit of this post of its images. I have here an image pertaining to a teaspoon from “Gilbert’s” later history. I have also uploaded the original image from the set of tongs that first sparked my interest. 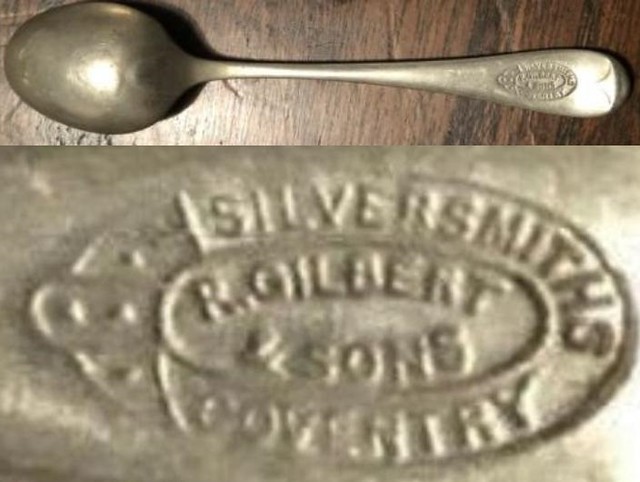 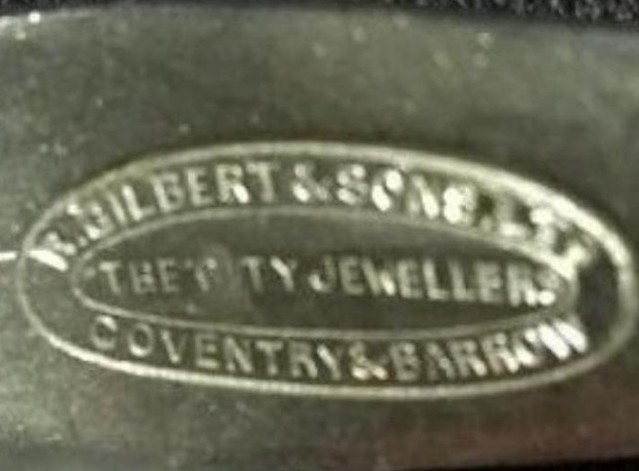 I saw this retailers mark shown below recently on line. 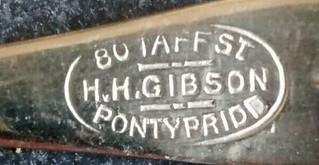 I thought it could be of interest here or equally in the "Firms Working in Wales in the 19th and 20th Centuries" section as Pontypridd is a moderate sized town, positioned a bit inland, from the South Wales coast.
I found a couple of other images relating to the retailer “H.H.Gibson”. First in an advert at beginning of the 19th century the concern was described as a watchmaker and repairer and a seller of watches, jewellery and plate. 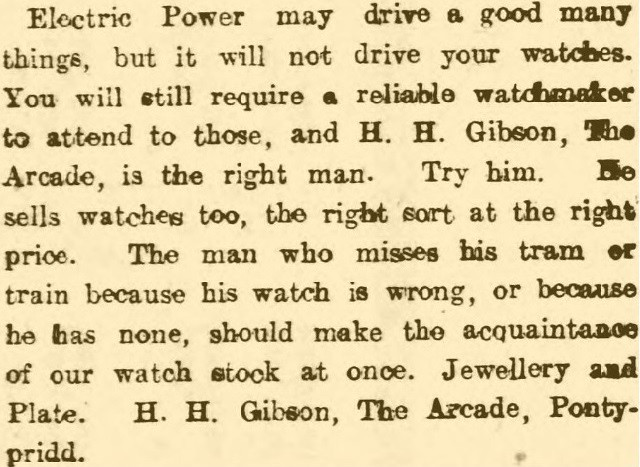 The advert was in the “Pontypridd Chronicle and Workman’s News” 1st July 1905. I love that opening sentence “Electric power may drive a good many things, but it will not drive your watches.”! Is that so?
We now have 2 addresses for “Gibson”, “The Arcade”, a Georgian structure, and 80 Taff Street that I assume was the later shop site. On a metal detecting forum, I found a 2012 reference, relating to the gift of a set of teaspoons with wedding rings from this same retailer around the late 1920’s, early 30’s period at 80 Taff Street. Last image is a wall “Fusee dial clock”. 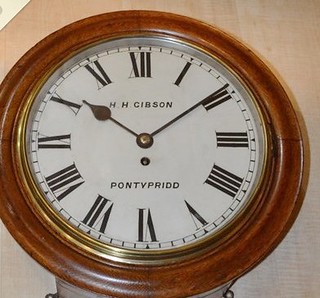