Hello, I just got hold of a teaspoon that appears to be of 12 loth standard. The spoon has the surname “Gottschalk” stamped on it next to the number 12, but also there is extra personalisation featuring the date 1874. 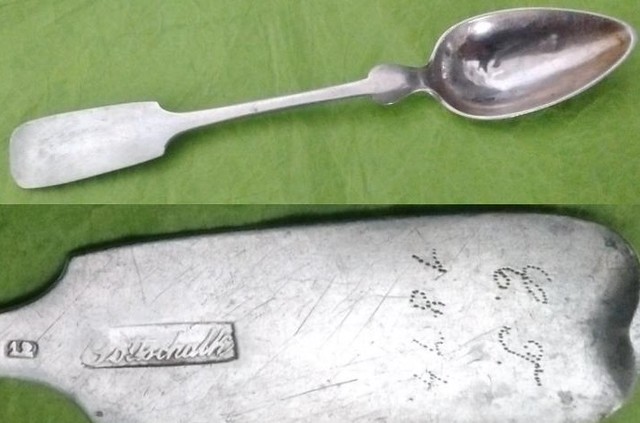 I had a good look on line for “Gottschalk” and only found a Germany born “C.W. Gottschalk” as a mid 19th century Missouri, USA silversmith and jeweller. I know the 12 loth standard was typically a Germany centred standard but I also know some of the other Baltic nations measured their silver grade in loth or lodgit units. I am further muddled as the “Gottschalk” surname is also found in the populations of other Baltic nations.
I think I own a German spoon made around the 1870’s. Please forum, if necessary correct me, and hopefully fill in a lot more details.
I have had several late 19th century North European spoons with extra personalisation similar to this spoon. It seems, with the spoons I own, to be less frequently seen on the British ones. Was it a common practice over the other side of the North Sea? Was it a Christening practice? Is it valid dating evidence?

Just put Pricking in the search box...lots of info to help.
Top

The maker is August Ernst Christian Gottschalk of Rostock.

The problem with Gottschalk is, in North-Germany are so many goldsmith with name Gottschalk and some of them have very similar makersmarks.

an example of Georg Ludewig Gottschalk in Lueneburg

it is not the same makersmark but very similar
Top

Thank you Traintime, Blakstone and Theodorich for your input to my questions. I have clearer ideas about my spoon now. There is always a problem when there is no indication of first names in the makers marks and particularly so if it is a “common” family name as in this case. I thought that this could be a possible problem when I saw on line an indicated frequency of a “Gottschalk” family name. The dreamer in me wonders if the USA “Gottschalk” was related to my spoon maker. I think the silversmith from the Baltic port of “Rostock”, who was likely working in the 1870’s period, would be well situated to have one of his spoons turn up in a small North East England port town. Alternatively from the map of Germany, and if I am correct, Lueneberg is not far from Hamburg, so it would be just across North Sea from that same small port town.
I followed Traintime’s advice about “personalisations” buy many of the images were missing and wondered if some were talking about “bright cut” styling as seen on numerous British spoons from the period 1780-1840.
Thanks for the responses.
Fishless
Top
Post Reply
5 posts • Page 1 of 1