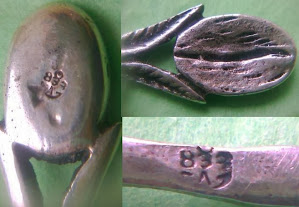 The song says there is an awful lot of coffee in Brazil but did the Brazilians also put a coffee bean on a finial?
It appears to me that the 833 overlays an anchor but there does not seem to be much comment out there about an actual “stand alone” Arabic 833 mark on silver items. 925-1000 does not even have a listing for Brazil in the World Silver Standards section.
Hope this is useful to the forum members and look forward opinions and comments from members. The marks are from 2 small “food serving” items and I am not sure that it is evident from the photos but they may have a “gold wash”.

I know this will be hard to believe, as it looks amazingly like '833', but I think it's really 'R&S'

It's the mark of the German company Reusch & SÃ¶hne.

Thank you Trev I am sceptical, very sceptical. There are similarities but I have uploaded a bigger version of the mark at the rear of the coffee bean finial. I do not recognise the last "3" as the "S" in you photo.

It is not much larger though as I have not mastered the size bit of uploading photos yet.
There are no dates given for R&S and their next guise Hermanm Spliedt was founded in 1857. I do not visualise cocktail forks with a coffee bean and a tropical hut under 2 trees as finials being made for the German market. Souvenirs from Brazil at the start of the 20th century seem more the style of the items. I did not illustrate the items fully in the original post because what I do not collect I pass on to buy more spoons.
Still I am hoping there are a few more replies to my post and maybe some examples of confirmed Brazilian marks are uploaded.

::: Bought a few from the estate of a Brazilian woman, been in her family for quite a long time before she arrived in the USA :::

This is the Brazil Silver Hallmark sheet, so it does show a "diamond-shaped" symbol, but I really can't match any of them to my spoons, it seems as if there are letters or symbols inside my diamonds, but it is so tiny and so difficult to read :::